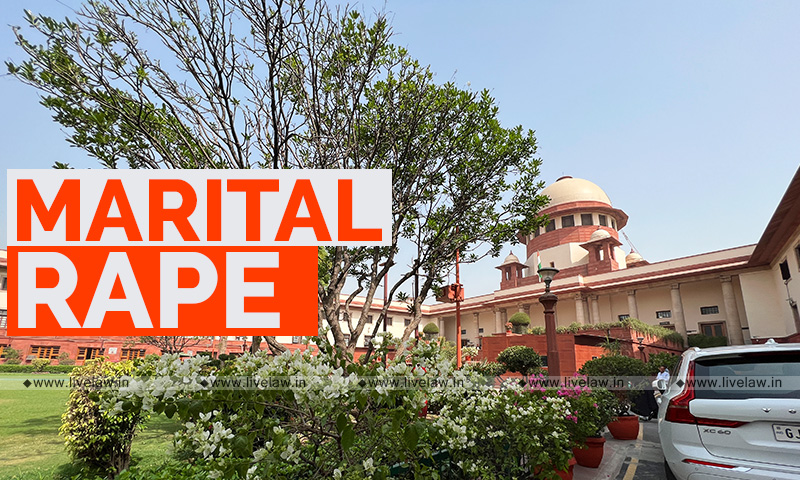 The Supreme Court on Tuesday issued notice in a special leave petition filed by a husband challenging a judgment of the Karnataka High Court which refused to quash the case for marital rape filed against him by his wife.

The High Court had sustained the trial court's order of framing charges for rape under Section 376 of the Indian Penal Cod against him on a complaint by his wife.

Senior Advocate Siddharth Dave, appearing for the petitioner-husband, submitted that the trial is starting from May 29.

Senior Advocate Indira Jaising, appearing for the wife on caveat, opposed stay and informed the bench that trial had been stayed for over 5 years and that the wife had been waiting indefinitely for the trial to commence.

"Take notice, we have to hear the matter", the CJI told Jaising. The bench posted the matter for hearing in the third week of July.

The High Court did not accept the husband's argument that the charge cannot be framed against him due to the exception to marital rape from the offence of rape as per Exception 2 to Section 375 of the Indian Penal Code. The Court observed that the exemption cannot be absolute.

"The contention of the learned senior counsel that if the man is the husband, performing the very same acts as that of another man, he is exempted. In my considered view, such an argument cannot be countenanced. A man is a man; an act is an act; rape is a rape, be it performed by a man the "husband" on the woman "wife"", the High Court had said.

It may be noted that the High Court has not ruled on the constitutionality of Exemption 2 to Section 375 IPC. It may also be recalled that the Delhi High Court has recently reserved judgment on a batch of petitions challenging the exemption to marital rape.

"The exemption of the husband on committal of such assault/rape, in the peculiar facts and circumstances of this case, cannot be absolute, as no exemption in law can be so absolute that it becomes a license for commission of crime against society", the Court said.

The Court observed that the exemption to marital rape is "regressive" and would run counter to the principle of equality enshrined under Article 14 of the Constitution of India.

"The Constitution, a fountainhead of all statutes depicts equality. The Code practices discrimination. Under the Code every other man indulging in offences against woman is punished for those offences. But, when it comes to Section 375 of IPC the exception springs. In my considered view, the expression is not progressive but regressive, wherein a woman is treated as a subordinate to the husband, which concept abhors equality."

"If a man, a husband, a man he is, can be exempted of allegation of commission of ingredients of Section 375 of the IPC, inequality percolates into such provision of law. Therefore, it would run counter to what is enshrined in Article 14 of the Constitution", the Court observed.

The Police, after investigation, filed a charge sheet against the petitioner. While filing the charge sheet, the offences punishable under Sections 498A, 354, 376, 506 of the IPC and Sections 5(m) and (l) r/w Section 6 of the POCSO Act, 2012, are invoked.

The Special Court framed charges against the petitioner alone in terms of its order dated 10.08.2018, for offences punishable under Sections 376, 498A and 506 of IPC and Section 5(m) and (l) r/w Section 6 of the POCSO Act. It is at that juncture, the petitioner has knocked the doors of this Court in the subject criminal petition seeking the following prayers