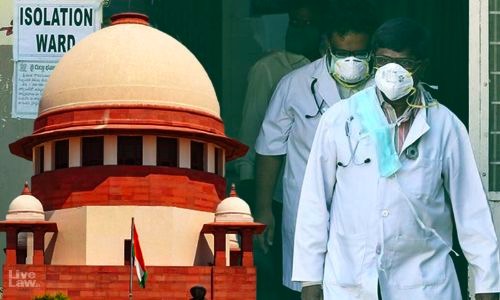 The Supreme Court, on Monday, issued notice in a petition challenging the 2019 Amendment to the Regulations on Graduate Medical Education, 1997 to the extent it precludes candidates with speech and language benchmark disability (quantified at 40% or above) from availing reservation and taking admission in MBBS courses. Advocate, Mr. Gaurav Agarwal appearing on behalf of the petitioner, apprised...

The Supreme Court, on Monday, issued notice in a petition challenging the 2019 Amendment to the Regulations on Graduate Medical Education, 1997 to the extent it precludes candidates with speech and language benchmark disability (quantified at 40% or above) from availing reservation and taking admission in MBBS courses.

Advocate, Mr. Gaurav Agarwal appearing on behalf of the petitioner, apprised a Bench comprising Justices D.Y. Chandrachud and Hima Kohli that the impugned regulation takes away the statutory right of a person with benchmark disability who is, in essence, prohibited from pursuing a medical course. He added that the petition was diagnosed with a permanent disability of 'Cleft Lip Palate Repair', a speech and language disability, quantified at 55%. He submitted that 50% of the time people can understand what she is saying and 50% of the time they might not. However, the same is curable with the use of computer softwares.

The Bench issued notice to the Counsel for National Medical Commission, returnable in four weeks. Justice Chandrachud noted that the petitioner was initially allotted a seat in a college in Karnal which was later cancelled. Lamenting that the petitioner ought to have approached the Apex Court earlier so that it could have invoked jurisdiction under Article 142 to protect her admission, the Judge reckoned,

"You should have come here. We would have passed an order under A. 142 and protected her. Poor Girl lost her admission. I was very disturbed when I read the petition."

As per the impugned regulation, disability quantified at 39% or below makes one eligible for reservation, but for 40% or beyond there is neither provision for reservation nor for taking admission. The blanket ban is assailed for being disproportionate. The petition argues that the notification stands in clear derogation of the rights of persons with disability contemplated in Rights of Persons with Disabilities Act, 2016 as well as mandates under the UN Convention on Rights of Persons with Disabilities, 2007. The petition also claims that the determination of disability set out as cut-off is also without any scientific basis and is thus arbitrary, and discriminatory. It contends that the petitioner has been excluded from pursuing her medical education only because her speech defect is in excess of 40%, and she does not suffer from intellectual or physical disability. Reliance is placed on the judgment of the Apex Court in Vikas Kumar v. UPSC to argue on 'reasonable accommodation' to persons with disability. The petition also relies on doctrines of Progressive Realisation of Rights and Non-retrogression as elucidated in Navtej Singh Johar v. Union of India.

The petition beseeches the Bench to invoke jurisdiction under Article 142 and allow her to pursue MBBS course in the allocated seat under reserved seats for persons with benchmark disabilities.

On 19.04.2017, the Right of Person with Disabilities Act, 2016 came into force. A report was submitted by experts to the Medical Council of India (now NMC) with respect to formulation of guidelines for admission of persons with specified disabilities. The report suggested that the persons with 40% or above speech and language disability should not be eligible to be admitted to a medical course. Thereafter, the 2019 Amendment was made to the Regulations on Graduate Medical Education, 1997 in tune with the suggestions of the experts. On 26.10.2021, the petitioner was issued her disability certificate and he appeared for NEET UG 2021. Subsequently, after assessment of disability and eligibility for admission to the MBBS course, the petitioner was allocated a seat at Kalpana Chawla Government Medical College, Karnal, Haryana. She made the requisite deposits. On 14.03.2022, a disability certificate was issued declaring her a person with benchmark disability. She was declared ineligible for admission as per the 2019 amendment. Re-verification exercise was also taken up, but there was no change in her disability status. A petition was filed before the Punjab and Haryana High Court praying for granting her admission to the allocated seat; representations were also made to the concerned authorities. The High Court directed the said authority to consider her representation. It yielded no results, as the authority merely re-affirmed her ineligibility. Another writ was filed before the High Court which was eventually withdrawn without the consent of the petitioner.