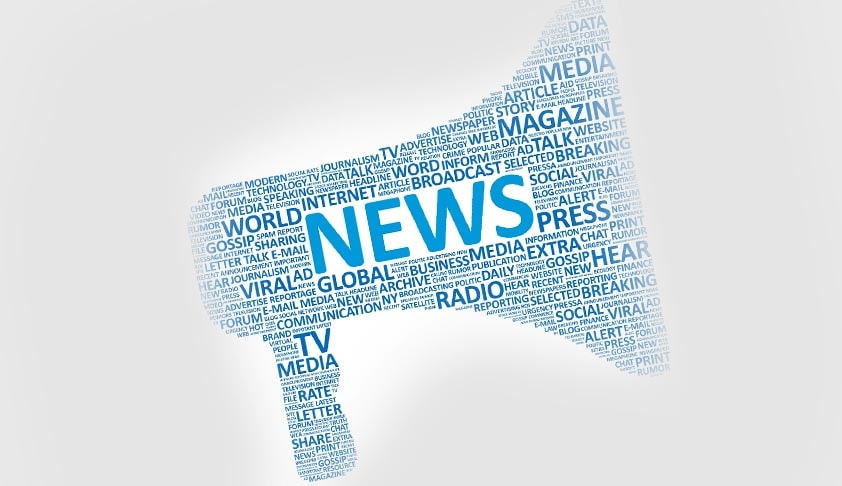 Supreme Court bench headed by Chief Justice SA Bobde on Monday issued notice on a petition filed by Film Producer Nilesh Navalakha seeking establishment of an independent, regulatory 'Media Tribunal' to hear and expeditiously adjudicate complaints of violation of programme code against media, filed by viewers/ citizens.The Petitioner has stated that the same is necessary to bring about...

The Petitioner has stated that the same is necessary to bring about a balance between the right to freedom of speech and expression of the Media-Businesses and the competing right to information of the citizenry under Article 19(1)(a), right to reputation and the right to dignity under Article 21, as well as in the interests of preserving peace and harmony in the nation.

"Over the last few years, Media Trials, hate speech, propaganda news, paid news, have become the order of the day, thereby impeding the right to a fair trial of victims and right to fair and proportionate reporting. It is submitted that reckless reportage by the Electronic Media without accountability can, by no stretch of imagination, be read into the right to freedom of speech and expression enjoyed by the Electronic Media," the plea filed through Advocates Rajesh Inamdar, Shashwat Anand and Amit Pai states.

Petitioner submitted that the present petition is not to curb the fundamental rights of the Media-Business, but only to bring about some accountability for misinformation, inflammatory coverage, fake news, breach of privacy, etc. which the Media- Business has indulged in, only with the aim to further their business, and to bring about consequences for acting in a fashion that is contrary to constitutional goals and morality. It is submitted the exercise of power by the Electronic Media without any accountability is severely detrimental to the due process of law, and contrary to the rule of law.

The Petitioner further pointed out that such reporting negates the fundamental rights of the citizenry at large, being Right to Live with Human Dignity, Right to Livelihood, Right to Education, Right to Know, Right to Fair Information and Proportionate Media Reporting, et al, as enshrined under Article 21 of the Constitution, apart from being antithetical to the citizen‟s rights guaranteed under Article 19(1)(a).

He has therefore urged the Court to appropriate guidelines for regulation of media in exercise of the plenary and inherent powers under Article 32 and 142 of the Constitution, until a legislation is introduced.

To this end, he has sought setting up of an independent High Powered Committee, headed by a retired Chief Justice or Judge of the Supreme Court or High Court and consisting of distinguished citizens from different fields/ professions and concerned stakeholders of the Central Government, to scrutinize and review the entire legal framework relating to Media-Business regulation and recommend appropriate guidelines to be laid down by the Supreme Court.

The Petitioner stated that self-regulation by media cannot be the answer to the problem at hand since under the Indian Constitutional setup, it is solely the Judiciary which enjoys the privilege of self-regulation.

"Equating the Media-Business with the Judiciary, in terms of the privilege of "self-regulation" directly strikes upon the Independence of the Judiciary and rattles and shakes the very foundations of the Indian Constitutional Scheme and the Democracy, and the same goes against every notion and canon of law and justice prevailing in India," states the plea.

It is further averred that if the above reliefs are granted, the same would not impede the freedom of press since the same emanates from Article 19(1)(a) of the Constitution and is subject to the restrictions that are provided under Article 19(2) thereof.

The plea raises the following questions of law for consideration by the Top Court:

Whether the news broadcasters/electronic media enjoy unfettered freedom, of a much higher degree than those enjoyed by the citizens of the Country and whether such freedom can only be subject to self-regulation?

Whether regulation of the news broadcasters/electronic media would amount to curtailing the freedom of press or media, if the same is done within the parameters specified in Article 19(2)?

Whether the Article 21 of the Constitution envisages the Right of the Citizens to Free, Fair and Proportionate Media Reporting?

Whether there is a need for laying guidelines and setting up of a judicial regulatory mechanism in respect of media houses?

The petition was settled by Senior Advocate Devadatt Kamat.