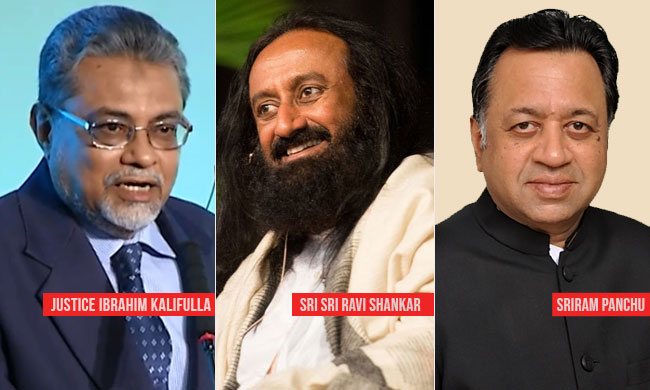 The Constitution Bench of Supreme Court today referred the Ayodhya-Babri Masjid land dispute case for mediation. The Court has constituted a panel of mediators.Coincidentally, all the panel members hail from Tamil Nadu.Here is a background of the panel members.Justice F M Ibrahim KalifullahThe Court has appointed former SC judge Justice Fakkir Mohammed Kalifullah as the Chairperson of...

The Constitution Bench of Supreme Court today referred the Ayodhya-Babri Masjid land dispute case for mediation. The Court has constituted a panel of mediators.

Coincidentally, all the panel members hail from Tamil Nadu.

Here is a background of the panel members.

The Court has appointed former SC judge Justice Fakkir Mohammed Kalifullah as the Chairperson of the panel.

He started practice of law at Chennai. He was appointed judge of Madras High Court in 2000. Later, he was appointed Chief Justice of High Court of Jammu and Kashmir. On April 2, 2012, he was elevated to the Supreme Court.

He retired from Supreme Court on July 22, 2016. At his farewell function, the then CJI T S Thakur commented that Justice Kalifulla played a vital role in suggesting the way the BCCI case needs to be taken forward and said he "provided valuable insights".

Sri Sri Ravi Shankar is the founder of Art of Living foundation.

In early 2018, he had attempted an out of court settlement of the dispute by holding talks with leaders of both Hindu and Muslim groups. He had suggested that Muslims should give up their claims on the disputed site after expressing that it was not a place of importance for them.

"Because it's Lord Ram's birthplace, there is such a strong feeling connected with the place. And since it is not that important place for Muslims and (is) also in a place where there is conflict, namaaz is not acceptable. Anyway, it is not going to serve the purpose; and when it is not serving the purpose of the other community (Muslims), then, it should be gifted," he told IANS in an interview.

He had also expressed that a legal adjudication of the dispute will cause "heartburn" to the losing side, which will create discord.

""So, in either case, there will be discord in society. I want to create a win-win situation, where both communities come together and respect for each is restored, where respect of each is honoured. That is the formula we are suggesting, why not do it?" he said.

The All India Muslim Personal Law Board had however openly rejected the proposals of Sri Sri Ravi Sankar.

The appeal through the letter by Sri Sri Ravi Shankar has no relevance now when the Board has already taken a decision on the issue and made its stand clear to all stakeholders," said AIMPLB Secretary Jafrayab Jilani.

Jilani said that the Board had also made it clear that once a mosque is built on any land it cannot be handed over to anyone. "We are bound by our Islamic laws and outrightly reject Sri Sri Ravi Shankar's appeal," said Jilani.

Sriram Panchu is a senior advocate based in Chennai, who has a reputation of being a world class mediator.

He is a founder of The Mediation Chambers, which offers services in mediation and med-arb. He is the president of the Association of Indian Mediators and a director on the board of the International Mediation Institute (IMI). He set up India's first court-annexed mediation centre in 2005, and has been instrumental in making mediation a part of India's legal system.

The panel has been given the liberty by the Court to solicit more mediators or seek legal assistance.

The proceedings will be held at Faizabad in UP with the state government being directed to extend suitable facilities for the purpose.

The mediation process is to be initiated in one week, to be concluded within the eight-week period granted for the examination of the official translations of the oral evidence filed by the state of UP. The court required the first status report in respect of the mediation to be submitted to it within 4 weeks.

The bench also clarified that the mediation process being held in-camera, its details shall remain confidential, with no publications in print or electronic media in this connection.