Mere Exclusion Of Sibling From Will Not A Ground To Suspect Its Genuineness : Supreme Court 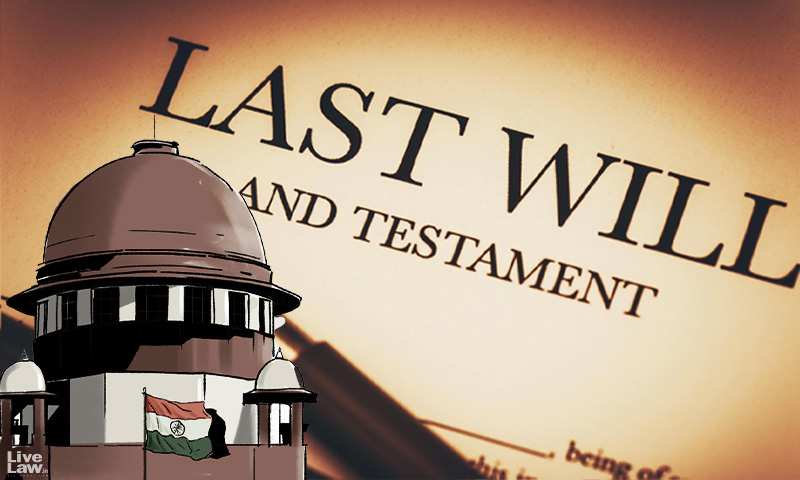 While dealing with the validity of a Will, the Supreme Court observed that a mere exclusion of a sibling per se from the Will would not create a suspicion against it, unless it is surrounded by other suspicious circumstances.The Court stated that a testamentary court is not a "court of suspicion" but a "court of conscience" that has to consider relevant materials instead of adopting...

While dealing with the validity of a Will, the Supreme Court observed that a mere exclusion of a sibling per se from the Will would not create a suspicion against it, unless it is surrounded by other suspicious circumstances.

The Court stated that a testamentary court is not a "court of suspicion" but a "court of conscience" that has to consider relevant materials instead of adopting ethical reasoning.

In this case, the Will was registered and its execution was admitted.

The bench of Justices SK Kaul and MM Sundresh in the present case was dealing with an appeal against a judgment of the High Court which had doubted the genuineness of a Will upon which the appellant was basing his claim by observing that there was no logic for excluding the appellant's siblings from the Will and that evidence by the attesting witness was not sufficient enough to remove the suspicion around the Will (Exhibit P4).

The Top Court while setting aside the High Court's judgement in V Prabhakara v Basavaraj K (Dead) by LR and Another. observed that,

"A testamentary court is not a court of suspicion but that of conscience. It has to consider the relevant materials instead of adopting ethical reasoning. A mere exclusion of either brother or sister per se would not create a suspicion unless it is surrounded by other circumstances creating an inference. In a case where a testatrix is accompanied by the sister of the beneficiary of the Will and the said document is attested by the brother, there is no room for any suspicion when both of them have not raised any issue."

A registered will (exhibit P4) was executed in favour of V Prabhakara ("appellant" in the present case) by Ms Jessie Jayalakshmi ("deceased") on September 4, 1985, who had adopted the appellant as her son. The will was attested by the Appellant's brother (Mr Vijay Kumar) and even the deceased was brought to the sub registrar's office.

Although the deceased and her husband (Respondent No 1) obtained a divorce decree on March 26, 1988, her husband was permitted to reside in the suit property.

The appellant filed a suit for declaration and possession of when the deceased's husband and her son (Respondent No 2) refused to vacate the suit property (residential house for which appellant paid all statutory dues.)

The trial court on December 11, 2003, decreed the suit after being satisfied that to prove exhibit P4 (registered will) parameters u/s 63 of the Indian Succession Act r/w section 68 of the Indian Evidence Act,1872 were complied with. The court also gave reasons while doubting the genuineness of exhibit D1.

Aggrieved, the Respondents approached the High Court invoking section 96 of Code of Civil Procedure, 1908. Although the High Court affirmed the reasons for doubting the genuineness of the unregistered will (exhibit D1), the High Court entertained a suspicion and dismissed the suit while allowing the appeal.

The High Court observed that there was no logic for excluding the appellant's siblings from the will and that evidence by attesting witness was not sufficient enough to remove the suspicion around exhibit P4.

The appellant had also filed an application for review which was dismissed by the High Court on November 23, 2007.

On the other hand, the Respondent's counsel contended that the question as to whether there existed a suspicious circumstance was a fact that could not be adjudicated by invoking Article 136. It was also the counsel's contention that there was no reason for exclusion of the appellant's siblings from the will.

Relying on the judgements in Joseph Antony Lazarus (Dead) byLRs v A.J. Francis, (2006) 9 SCC 515 and Mahesh Kumar (Dead) By LRs v Vinod Kumar & Ors., (2012) 4 SCC 387 the counsel submitted that the first appellate court had got adequate jurisdiction to satisfy itself on the suspicion surrounding exhibit P4.

Considering that the conduct of a party would be construed as a fact under section 8 of the Indian Evidence Act, 1872, the bench comprising Justices SK Kaul and MM Sundresh observed :

"Section 3 of the Indian Evidence Act defines "a fact". The conduct of a party would be construed as a fact under Section 8. Such conduct may either be a previous or subsequent one. It is the product of a motive or a preparation When evidence is given on the conduct of a party and if it is proved to the satisfaction of the court particularly when it involves an admission, adequate weightage is required to be given. Such conduct would include a silence emanating from a party who is expected to speak and express. When a party makes a claim based upon revocation of the earlier Will, as indicated in the subsequent one, the said acknowledgement of the former would form part of conduct leading to a relevant fact vis-à-vis a fact in issue."

Observing that when such an admission is clear and unequivocal, there is no need to prove it while taking judicial notice, the Court observed that,

"Under Section 58, a fact admitted need not be proved unless the court warrants it. Thus, in a case where a party admits the execution of the document in the nature of a Will, which is otherwise proved in accordance with Section 63 and Section 68 of the Indian Succession Act and Indian Evidence Act respectively, it becomes a relevant fact duly proved, in the absence of any discretion by the court. The exercise of discretion is a judicial one and therefore, there must be a basis in asking a party to prove it otherwise."

Remarking that the Will being a testamentary document did not find a place u/s 17 of the Registration Act, the Court observed that registration of a Will is only an additional or attending circumstance in proving it with the rebuttable presumption available under Section 114(e) of the Indian Evidence Act.

To adjudicate with regards to appellant's contention that there was no pleading disputing exhibit P4, the bench relied on Bacchaj Nahar v. Nilima Mandal (2008) 17 SCC 491 and observed that,

"A relief can only be on the basis of the pleadings alone. Evidence is also to be based on such pleadings. The only exception would be when the parties know each other's case very well and such a pleading is implicit in an issue. Additionally, a court can take judicial note of a fact when it is so apparent on the face of the record."

The bench in the judgement authored by Justice MM Sundresh also observed that though the first appellate court is the final court of fact and law, it has to fall in line with the scope and ambit of Section 96 of the Code.

The bench took note of the fact that the appellant complied with the mandate of Section 63 of the Indian Succession Act along with Section 68 of the Indian Evidence Act and that appellant's siblings being present at the time of execution of the registered will did not raise any demur.

"Both the Courts found that Exhibit D1 is a forged and fabricated document. The alleged mortgage in favour of Respondent No.1 has not been proved. The Appellate Court, in our considered view, has unnecessarily created a suspicion when there is none. The Respondents have not denied the factum of the execution of Exhibit P4. The very fact that they made reliance upon Exhibit D1, which took note of Exhibit P4 as validly done, there is no need for any suspicion on the part of the High Court. That too, when the Trial Court did not find any. Such a suspicion, as stated earlier, did not arise from either of the siblings of the Appellant who would otherwise be entitled to a share in the Suit Property. Their exclusion will not enure to the benefit of the Defendants who are bound by the recitals under Exhibit D1 and averments made in their written statement," the Top Court observed to allow the appeal and set aside High Court's judgement.