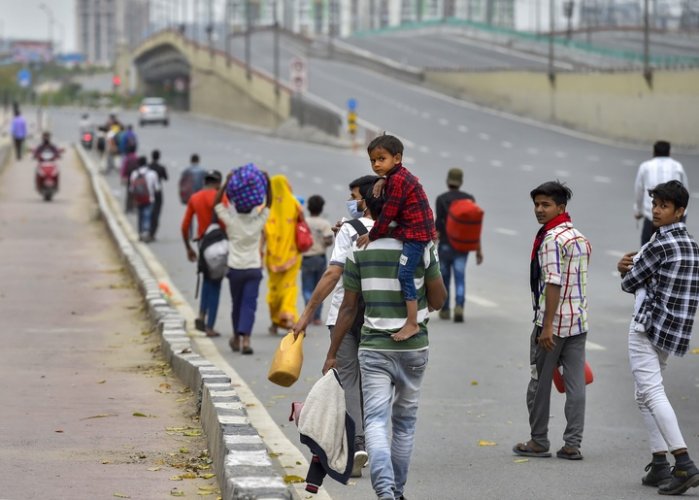 x
"We do not intend to interfere with the free discussion about the pandemic, but direct the media refer to and publish the official version about the developments", SC said.

The Supreme Court on Tuesday observed that the migration of large number of labourers working in the cities in the wake of the national lockdown was triggered by panic created by fake news that the lockdown would continue for more than three months.

"The migration of large number of labourers working in the cities was triggered by panic created by fake news that the lock down would continue for more than three months. Such panic driven migration has caused untold suffering to those who believed and acted on such news. In fact, some have lost their lives in the process.", observed the bench comprising Chief Justice of India S A Bobde and Justice L Nageswara Rao.

"It is therefore not possible for us to overlook this menace of fake news either by electronic, print or social media", added the bench.

The observations came in the order passed by the bench in a PIL seeking welfare measures for migrant workers in the wake of 21-day lockdown declared countrywide to prevent the transmission of COVID-19.

"...we expect the Media (print, electronic or social) to maintain a strong sense of responsibility and ensure that unverified news capable of causing panic is not disseminated".

Pertinently, the Central Government, in its affidavit submitted in response to the PIL, had urged the Court to pass a direction that no media should publish COVID-19 related news without first ascertaining facts with the Government. The bench also recorded the submission of the Solicitor General that a daily bulletin by the Government of India through all media avenues including social media and forums to clear the doubts of people would be made active within a period of 24 hours.

The bench clarified that it did not intend to interfere with free discussion on the pandemic; but the media should refer to the official version and publish the same.

"We do not intend to interfere with the free discussion about the pandemic, but direct the media refer to and publish the official version about the developments", the bench observed.

The bench also took note of the suggestion by Solicitor General that the Centre was arranging counsellors and community leaders from all religions to visit the relief camps of migrant workers to alleviate their stress and anxiety.

"Learned Solicitor General of India states that within 24 hours the Central Government will ensure that trained counsellors and/or community group leaders belonging to all faiths will visit the relief camps/shelter homes and deal with any consternation that the migrants might be going through. This shall be done in all the relief camps/shelter homes wherever they are located in the country", ordered the bench.

The  bench also called for humane approach by police and authorities towards inter-state workers, having regard to their unfortunate situation.

"The anxiety and fear of the migrants should be understood by the Police and other authorities. As directed by the Union of India, they should deal with the migrants in a humane manner.

Considering the situation, we are of the opinion that the State Governments/Union Territories should endeavour to engage volunteers along with the police to supervise the welfare activities of the migrants. We expect those concerned to appreciate the trepidation of the poor men, women and children and treat them with kindness".

The lockdown period has witnessed a wave of reverse-migration of thousands of migrant workers from metros to villages. There were reports of migrants, who were left without work after the lockdown,  walking hundreds of kilometers on foot to reach their native places, owing to lack of transportation facilities. At least 22 persons have lost their lives reportedly, while trying to get home during the lockdown.