[Minimum Wages Act] Burden Of Person In Charge Of Company - Proviso To Section 22(c) Does Not Reverse Onus Of Proof : Supreme Court 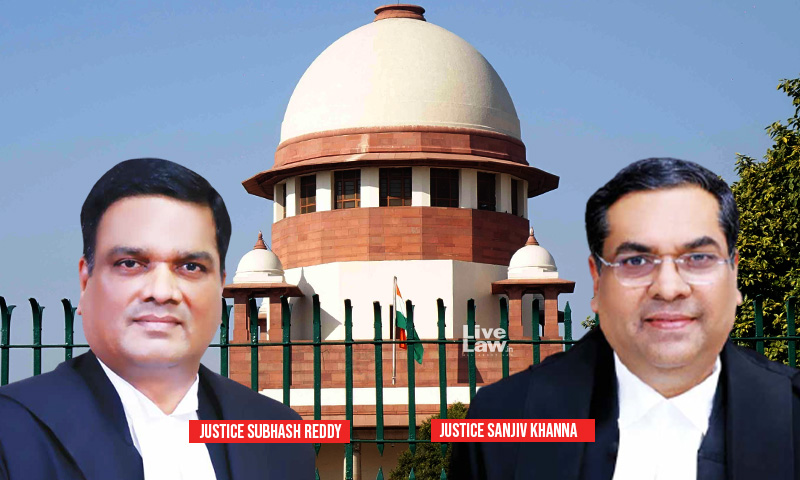 The Supreme Court on Friday held that the burden on the accused to prove innocence under proviso to Section 22C(1) of the Minimum Wages Act,1948 shifts only when the ingredients of Section 22C(1) have been satisfactorily established by the prosecution. A bench comprising Justices R Subhash Reddy and Sanjiv Khanna quashed a summoning order and proceedings issued by the...

The Supreme Court on Friday held that the burden on the accused to prove innocence under proviso to Section 22C(1) of the Minimum Wages Act,1948 shifts only when the ingredients of Section 22C(1) have been satisfactorily established by the prosecution.

A bench comprising Justices R Subhash Reddy and Sanjiv Khanna quashed a summoning order and proceedings issued by the Judicial Magistrate, First Class, Sagar, Madhya Pradesh taking cognisance of the offence under Section 22A of the Minimum Wages (Central) Rules,1950 as per the complaint filed by the Labour Enforcement Officer (Central) against the appellant, Dalye De'Souza, a director of M/s. Writer Safeguards Pvt. Ltd. ("the Company")and one Mr. Vinod Singh, Madhya Pradesh head of M/s. Writer Safeguards Pvt. Ltd.

The Company had entered into an Agreement for Servicing and Replenishment of Automated Teller Machines with M/s. NCR Corporation India Pvt. Ltd. for maintenance of the ATMs of the State Bank of India. The Labour Enforcement Officer (Central) upon inspection of one of such ATMs of the State Bank of India at AST, Komal Chand Petrol Pump, Civil Lines, Sagar, Madhya Pradesh on 6th March, 2014 issued a notice to the Appellant as well as Mr. Vinod alleging non-compliance with Section 21(4), 22, 25(2), 26(1) and 26(5) of the Minimum Wages Act, 1948 (for short, 'the Act') and Minimum Wages (Central) Rules, 1950 (for short, 'the Rules'). Eventually, on 14th August, 2014 a criminal complaint under Section 22A of the Act was filed before the Court of the Chief Judicial Magistrate, Sagar, Madhya Pradesh. In view of the same, the appellant filed a petition [M.Cr.C No. 846/2016] under Section 482 of the Code of Criminal Procedure, 1973 before the Madhya Pradesh High Court with a plea to quash the criminal complaint. The Petition was dismissed by the High Court on 20th January, 2020, for lack of merit.

The Supreme Court observed that Section 22A of the Act being a general provision for punishment, an elaborate discussion on Section 22C, which deals with the ingredients of the offences, would be of greater relevance for the case at hand. As per sub-section (1) of Section 22C, where an offence is committed by a company, every person who at the time of the commission of the offence who were 'in-charge of' and was 'responsible for conducting business' of the company, as well the company itself would be deemed to be guilty of the offence. However, proviso to Section 22C(1) curves out a route to escape liability under Section 22C(1), wherein the accused gets an opportunity to prove that the offence was committed without their knowledge or that they had exercised all due diligence to prevent the commission of such offence. Placing reliance on S.M.S Pharmaceuticals Ltd. v. Neeta Bhalla And Another (2005) 8 SCC 89 and Aneeta Had v. Godfather Travels and Tours Private Limited (2012) 5 SCC 661, the Supreme Court inferred that the onus under the proviso would come into effect only when the prosecution has discharged its burden under the main provision i.e. Section 22C(1). The Supreme Court was of the view that:

The proviso being an exception cannot be made a justification or a ground to launch and initiate prosecution without the satisfaction of conditions under sub-section (1) of Section 22C of the Act. The proviso that places the onus to prove the exception on the accused, does not reverse the onus under the main provision, namely Section 22C(1) of the Act, which remains on the prosecution and not on the person being prosecuted.

Unlike Section 22C(2) Section 22C(1) does not use the term 'director, manager, secretary or other officer of the company' to impute vicarious liability. The requirement to attract the deemed effect of Section 22C(1) is the that the accused ought to be 'in-charge of the company' and 'responsible to the company' as per the dictum of Girdhari Lal Gupta v. D.H. Mehta and Another 1971 (3) SCC 189, wherein the Supreme Court had interpreted 'in-charge' to mean a person who in over-all control of the day to day business of the company. Considering that the complaint had no specific averments that the appellant or Mr. Vinod was in-charge of and responsible to the company, the Supreme Court held that:

In the factual context present before us it is crystal clear that the complaint does not satisfy the mandate of sub-section (1) to Section 22C of the Act as there are no assertions or averments that the appellant before this Court was in-charge of and responsible to the company M/s. Writer Safeguard Pvt. Ltd. in the manner as interpreted by this Court in the cases mentioned above. The proviso to sub-section (1) in the present case would not apply. It is an exception that would be applicable and come into operation only when the conditions of sub-section (1) to Section 22C are satisfied. Notably, in the absence of any specific averment, the prosecution in the present case does not and cannot rely on Section 22C(2) of the Act.

Another difficulty for the prosecution as pointed out by the Court was that the Company was not made an accused or summoned to be tried for the alleged offences. Referring to a catena of judgments, the Supreme Court opined that until and unless it could be shown that the company as a principal accused has committed the offence, the 'person' in Section 22C(1) cannot be held to be liable and prosecuted. The Supreme Court held that:

In terms of the ratio above, a company being a juristic person cannot be imprisoned, but it can be subjected to a fine, which in itself is a punishment. Every punishment has adverse consequences, and therefore, prosecution of the company is mandatory. The exception would possibly be when the company itself has ceased to exist or cannot be prosecuted due to a statutory bar. However, such exceptions are of no relevance in the present case. Thus, the present prosecution must fail for this reason as well.

In the present case the Supreme Court also delves into the territory of personal liberty under Article 21 of the Constitution to state that prosecution of such nature has adverse and harsh consequences for the accused and is in the teeth of the judgment delivered by the Court in Directorate of Revenue and Another v. Mohammed Nisar Holia (2008) 2 SCC 370, which recognises right to not to be disturbed without sufficient grounds.

Finally, observing that the Courts should refrain from issuing summons in a mechanical and routine manner, without applying their minds to see if a prima facie case for taking cognisance is at all made out, as it frustrates the entire purpose of laying down a detailed procedure under Chapter XV of the 1973 Code, the Supreme Court quashed the summoning order and the proceedings thereunder.