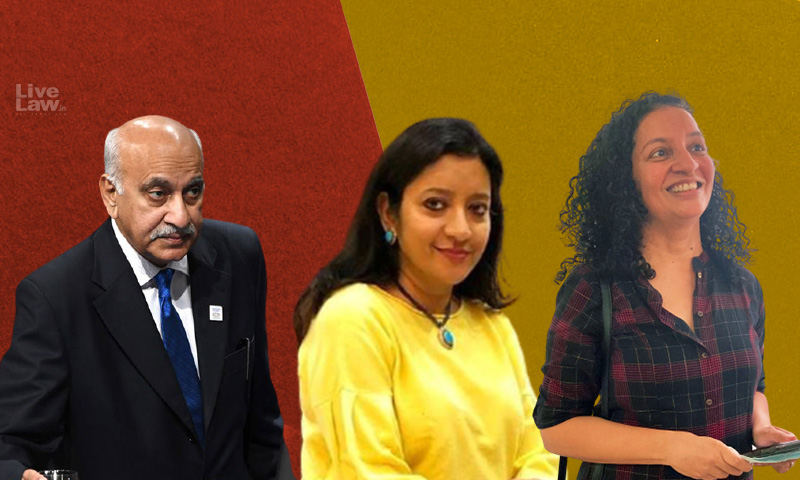 x
Trigger warning: This article contains details about sexual assault and harassment which may be triggering to survivors.

Senior editor and former Union Minister MJ Akbar cannot be regarded as a "man of stellar reputation", observed a Delhi Court while dismissing his criminal defamation complaint against journalist Priya Ramani over her sexual harassment allegations made against him.The Court made this observation on the basis of testimonies of Ramani and journalist Ghazala Wahab, who detailed their experiences...

Senior editor and former Union Minister MJ Akbar cannot be regarded as a "man of stellar reputation", observed a Delhi Court while dismissing his criminal defamation complaint against journalist Priya Ramani over her sexual harassment allegations made against him.

The Court made this observation on the basis of testimonies of Ramani and journalist Ghazala Wahab, who detailed their experiences of sexual harassment from Akbar.

"The Court also accept the contention of the accused that complainant is not a man of stellar reputation on the basis of testimony of accused DW1 and testimony of DW3 Ghazala Wahab(sic)", observed Ravindra Kumar Pandey, Additional Chief Metropolitan Magistrate, Rouse Avenue, New Delhi, in a 91-page order.

Ghazala Wahab, while deposing before the Court in her examination, said that her working desk at 'The Asian Age' was placed right outside Akbar's office, who always used to keep his office door open, except during meetings. 'I was once working on my computer when I realised that he was staring at me.', she deposed before the court.

In submitting so, she went ahead to depose that Akbar started sending her personal messages through Asian Age internet, and then asked her to come to his office. As she entered, he asked her find a word from the dictionary which was kept so low that one had to either bend or squat to open it.

'As I squatted to look for the word, Akbar came from beyond and held my waist. He started running his fingers from my breasts to my thighs. He held his back against the door to prevent it from opening. As I resisted, he held me tightly and pressed his thumb against my breasts' she submitted before the court.

While deposing so, Ghazala also informed the Court that on the next day of the alleged incident, Akbar sent her a message on the internet asking her to come inside. When she knocked and entered the room, he was standing close to the door and before she could react, Akbar shut the door, trapping her between the door and his body.

Ghazala then deposed that she immediately flinched and Akbar held her by her shoulders and bend to kiss her. Thereafter, she ran out of his office crying, down to the stairs, outside the building to the parking for finding a lonely spot there, where she continued to cry.

Ghazala also highlighted in her examination before the Court that there was no redressal mechanism at 'The Asian Age' to deal with instances of sexual harassment by male bosses or colleagues. Therefore, on one day, she messaged Akbar about her disapproval of his behavior, informing him that such behaviour was unwelcome and unacceptable. In the reply, Akbar told her that he had genuine feelings for her.

Priya Ramani on the other hand while deposing on a meeting between her and Akbar in the Oberoi Hotel, Mumbai, submitted in the Court that Mr. Akbar called her inside the hotel room which was his bedroom.

Ramani deposed that she felt ill at ease to be in such an intimate space for a professional interview. Thereafter, Ramani informed the Court that Akbar asked her questions about her boyfriend, family and marital status. Thereafter, she also said that Akbar offered her an alcoholic beverage from the Mini Bar to which she refused. Thereafter, Akbar got up and made himself a drink to which she thought it was Vodka.

Furthermore, while narrating her incident of sexual harassment, Ramani also argued that she doesn't believe that Akbar had an impeccable reputation or that he's a strict professional.

"My tweets were not malicious, I spoke the truth. This is a false case filed to create a chilling effect among all the women who had spoken out about their experiences about sexual harassment at the hands of Mr Akbar. It's an attempt to intimidate us and me by deliberately targeting me, Akbar, seeks to divert attention away from the serious allegations of sexual misconduct against him and the public outrage that had followed." said Priya Ramani in the Court.

Ramani said that sexual harassment need not be physical and can be verbal and mental.

Akabar's legal team, on the other hand, led by Senior Advocate Geeta Luthra, argued that the Vogue article affected his "stellar reputation reputation built brick by brick over 30 years". Luthra argued that Ramani's allegations were unbelievable as she kept quiet for over 30 years without availing any legal remedies.

"A reputation is a day by day, minute by minute, brick by brick built structure. It takes one second to destroy it. It takes 50 years to build it. No one has casted a single blemish. Thousands of employees have been working with me every year, even more than that. There was not a whisper for over 50 years. And then it can without any due process because you don't believe in due process. Just say something after 30 years, this is not tenable." argued Senior Advocate Geeta Luthra on behalf of Mr. MJ Akbar.

Ramani's lawyer Senior Advocate Rebecca John argued that by choosing Ms. Ramani for filing the criminal defamation complaint, Akbar was doing "selective prosecution" as he felt her to be a soft target.

The Court while refuting the argument of Akbar having a stellar reputation, also went ahead to observed:

" It cannot be ignored that most of the time, the offence of sexual-harassment and sexual abuse committed in the close doors or privately. Sometimes the victims herself does not understand what is happening to them or what is happening to them is wrong. Despite how well respected some persons are in the society, they in their personal lives, could show extreme cruelty to the females. "

In a rather significant observation on the issue of lack of redressal mechanism available to women in dealing with instances of sexual harassment at workplace, the Court also held:

"The time has come for our society to understand the sexual abuse and sexual-harassment and its implications on victims. The society should understand that an abusive person is just like rest of the other person and he too has family and friends. He can also be well respected person of the society. The victims of the sexual-abuse not even speak a word about abuse for many years because sometimes she herself have no idea that she is a victim of abuse. The victim may keep believing that she is at fault and victim may live with that shame for years or for decades. Most of the women who suffer abuse do not speak up about it or against it for simple reason " The Shame" or the social stigma attached with the sexual harassment and abuse. The sexual abuse, if committed against woman, takes away her dignity and her self confidence. The attack on the character of sex abuser or offender by sex abuse victim, is the reaction of self defence after the mental trauma suffered by the victim regarding the shame attached with the crime committed against her."

Commenting on the trauma faced by Indian women on being sexually abused, the Court also observed:

"The subtlety of the questions, asked in a situation of intense personal trauma, is indicative of her cerebral power and her ability of sharp and logical analysis. The Indian women are capable, pave the way for them to excel, they only require the freedom and equality. The 'glass ceiling' will not prevent the Indian women as a road lock for their advancement in the society, if equal opportunity and social protection be given to them."

Woman has a right to put up the grievance at any platform of her choice even after decades. Woman cannot be punished for raising voice agains sex abuse . Right to reputation cannot be protected at the cost of right to dignity - Court in #PriyaRamani case.#MJAkbar #MeToo pic.twitter.com/GtFENC5EQr