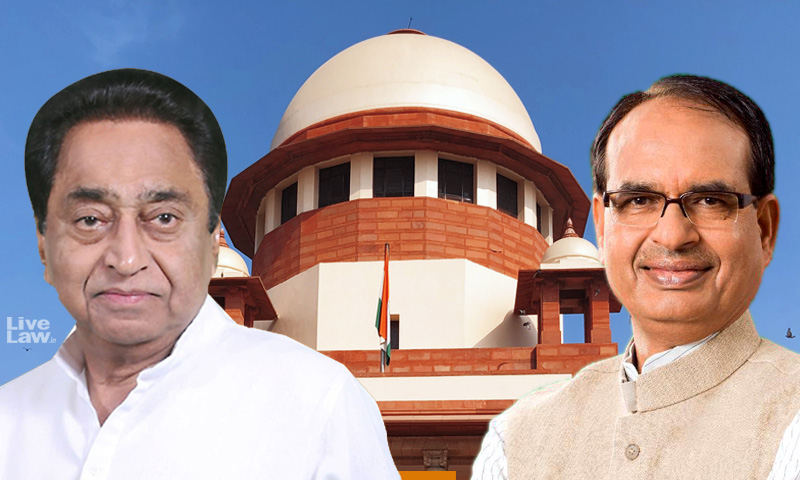 "MLA's are being detained by the BJP to skew numbers & topple the elected Government" Brother of Manoj Chaudhary, a Congress MLA has filed a writ petition before the Supreme Court, seeking the MLA's release from illegal detention. The petitioner has claimed that Chaudhary was abducted from his residence and is being held by Bhariya Janata Party members along with...

Brother of Manoj Chaudhary, a Congress MLA has filed a writ petition before the Supreme Court, seeking the MLA's release from illegal detention.

The petitioner has claimed that Chaudhary was abducted from his residence and is being held by Bhariya Janata Party members along with other MLA's of the state of Madhya Pradesh at a private resort in Bengaluru, Karnataka and that it would be undemocratic and unconstitutional to conduct the floor test if the MLA's who are being held in captivity are not released before the floor test.

"That the detenue is being forcefully held captive under the clout of the state of the ruling party with the aid and help of the police authorities of the state of Karnataka, completely against his free will and consent", the petition states.

In light of this, the petitioner further states that on March 11, 2020, both his father & him reached the said resort and found Chaudhary, along with some other MLA's of state of MP being held in captivity.

Depicting the manhandling and abuse, the Petitioner has narrated in his petition, that his father and him were allegedly restrained from meeting Congress MLA, Manoj Chaudhary and were immediately taken into custody by the police personnel present at the spot and on to a nearby Police Station.

"It is submitted that the Detenue is not being allowed to leave the premises at Bengaluru and is being deprived of his liberty and expression of choice thereby leading to the violation of his rights under Article 19 & 21 of the Constitution. The detention of the Detenue is completely unwarranted, illegal and without any authority" the Petitioner contends.

The Petition has further elucidated that the detention of Chaudhary and other MLA's by the BJP is an abuse of official machinery and power, which has been done to skew the number of MLA's in the Legislative Assembly.

Moreover, the petitioner has averred that the BJP, in its attempt to scuttle the democratic process, has coerced the MLA's into resignation.

On March 16, the Petitioner had written a letter to Governor (of Karnataka), alleging kidnapping of his brother by the BJP and demanded release.

It would hear the petition, filed by former Chief Minister Shivraj Singh Chouhan tomorrow at 10.30 AM.

Last week, Jyotiraditya Scindia, a top Congress leader defected to the BJP last week, and resigned from the assembly. Soon after Scindia announced he was leaving his old party, several Congress MLA's offered their resignation to Speaker of Legislative Assembly.

Six of their resignations have been accepted, while sixteen others have approached the Supreme Court, asking why theirs haven't.