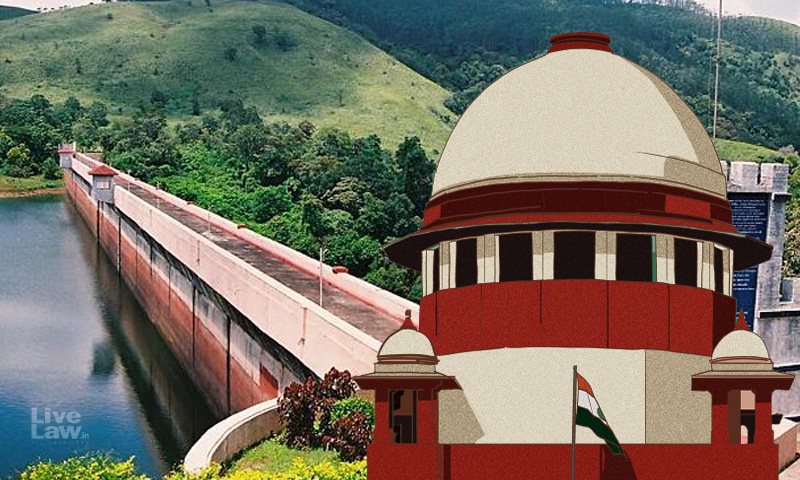 In the Mullaperiyar dam case, the Supreme Court on Thursday turned down a plea made by the State of Kearla to replace the present Chairman of the Supervisory Committee, which was constituted by the Supreme Court in 2014 to monitor the safety arrangemnets of the 126-year old dam.A bench comprising Justices AM Khanwilkar, Abhay S Oka and CT Ravikumar was against changing the composition of...

In the Mullaperiyar dam case, the Supreme Court on Thursday turned down a plea made by the State of Kearla to replace the present Chairman of the Supervisory Committee, which was constituted by the Supreme Court in 2014 to monitor the safety arrangemnets of the 126-year old dam.

A bench comprising Justices AM Khanwilkar, Abhay S Oka and CT Ravikumar was against changing the composition of the present Committee. The bench said that it will equip the present Committee with the powers under the recently enacted Dam Safety Act 2021 and will permit the Comittee to continue as a working arrangment till the National Dam Safety Authority comes into operation. Orders in that regard will be passed tomorrow morning.

Senior Advocate Jaideep Gupta, appearing for Kerala, suggested that the Chairman of the Central Water Commission be made the head of the Supervisory Committeee. However, Additional Solicitor General Aishwarya Bhati, on instructions from the Department, submitted that it will not be feasible for the CWC Chairman to head the Supervisory Committee as he is already heading 21 other panels.

Gupta said that the present Chairman of the Committee, Mr. Gulshan Raj, Chief Engineer of the Dam Safety Organization, was lower in rank to the Additional Chief Secretaries of Kerala and Tamil Nadu who are members of the Committee.  Hence, he sought for a person who is more senior in rank as the Chairman. The bench pointed out that this arrangment had been in existence since 2014 and added that disrupting the Committee could be counter-productive.

"We will not disturb the present Supervisory Committee, and we will permit one representative each from Kerala and Tamil nadu..", Justice Khanwilkar said.

The bench added that if a new person comes, it will be difficult for him to acclimatize with the situation, and hence it will be better that the persons who have been handling the matter in the past conitnue.

"If a new person comes, it will be difficult, there will be gaps in the decision...new committee will take time to acclimatize with the sitaution...Please understand, that new committee will not have comprehensive approach as there's no past experience...it will be prejudicial if the committee is destabilized.. the present arrangemnet is working well, and you want to disrupt it based on preceptions?", Justice Khanwilkar observed.

The bench cautioned against making any "experiments" with the arrangement and warned that a "half-baked cake will destroy the dam".

"Until new committee comes up which is made up by the Centre, till then let the present set up continue. Don't disturb the present committee based on perceptions", Justice Khanwilkar said.

The Bench was hearing a batch of petitions filed by Kerala-based parties seeking measures to ensure the safety of the century old dam.

The Supreme Court on Tuesday(April 5) had asked the Centre and the states of Tamil Nadu and Kerala to consider a "working arrangement" where the court-appointed Supervisory Committee may be entrusted with the functions and duties of the National Dam Safety Authority under the Dam Safety Act, 2021.

During the hearing in the pre-lunch session, there were few exchanges between Kerala and Tamil Nadu. Senior Advocate Shekhar Naphade, appearing for Tamil Nadu, alleged that Kerala was obstructing the TN officials from carrying out the works related to the Dam. "The whole attempt of Kerala is to drive us out of Kerala", Naphade submitted. "Every year, the issue is raised- this issue of flood, safety has been examined as recently as January 2022 by the supervisory committee, and in categorical terms, it says that the dam is safe", Naphade added.

Gupta countered this allegation by saying, "Can your lordships imagine the submission in independent India that Tamil Nadu is scared of being driven out of Kerala. Is this a permanent colonisation of Kerala by Tamil Nadu?".

The Bench said that it is focusing now only on the safety of the Dam and was not going into other contentious issues. Naphade submitted that Tamil Nadu should be permitted to carry out certain things which the 2006 and 2014 judgments have permitted in relation to the dam.

Mr. Naphade: "Otherwise, I am in a position to demonstrate how right from 2014, there has been obstruction, judicially recognised"

Mr. Gupta: "If my friend wants these issues to be decided by your lordships, we will argue"

Justice Khanwilkar: "what is there to argue now after the Act"

Mr. Gupta: "That is why we are agreeable to Your Lordships' vision. If my friend is seeking directions from the court, then we have to place the entire matter before your lordships"

Justice Khanwilkar: "We are not examining those allegations and counter allegations. We don't have to do it. Don't go in the history and past"

Mr. Gupta: "but my friend is insisting that it has to be a direction"

Justice Khanwilkar: "let us not go into the history and past policies. Concentrate on the future of the dam"

Mr. Gupta: "Safety measures don't include a new dam according to him. We are saying the best safety measure is a new dam"

Justice Khanwilkar: "to what extent it is correct, it is a matter for the authorities to examine"

Mr. Gupta: "Absolutely, I am not saying anything to that effect..."

Mr. Naphade: "the Act only deals with safety, nothing more"

Justice Khanwilkar: "Today, immediate attention is required to be given to the safety of the existing dam for which authorities are there under the act but it is not established"

Mr. Naphade: "My friend repeatedly says 'we have to argue". It is not like we are running away from that battle"

Justice Khanwilkar: "We are not recording anything to that effect"

Mr. Gupta: "Does my note say that we want to argue? I have only said that if my friends argues or says something to that effect then we have to argue"

Justice Khanwilkar: "We appeal to both the states to let the water flow, and safely"

'We will not be going to the issue of new dam right now; Vesting the supervisory committee with statutory functions and powers and strengthening it is the first arrangement to be ensured'- SC

Justice Khanwilkar (to advocates on the petitioners' side): "Supervisory committee has been constituted by this court. Please don't don't say the committee is not sensitive about your issues. If there is specific material to support that allegation, we will look into it. But don't make this very wide statement. Because it is appointed by the Supreme Court order forget about the states, we are not on the states- the safety is the complete responsibility of the supervisory committee. We are saying all functions under section 9 will go to the supervisory committee, which includes those under the second schedule also"

Justice Khanwilkar: "We will not be going to the issue of new dam right now. It is for the committee to evolve some mechanism for safety in the first place, and maybe if for value addition another dam is required, even that will be considered, but that will be considered at an appropriate time but not today. Today our concern is to immediately empower the supervisory committee with all the powers that are available with the Authority under the 2021 Act so that there is a statutory mechanism which starts rolling out immediately. Today as regards the activities of the supervisory committee, shackles are there of the Supreme Court judgment. Now the authority functioning under the Act has very wide powers. So let that committee discharge that power"

Justice Khanwilkar: "There are enough guidelines in the act. Don't take up one-one point from the 2021 act. It is a holistic arrangement to ensure safety of every dam across the country, not only one dam. You are concerned about only one dam, it is concerned about all the dams in the country. With particular to this dam, we are focusing presently, taking help of the supervisory committee which is already there and strengthening that committee to discharge all statutory functions which are enumerated under the 2021 act. That is the obligation of the supervisory committee"

Justice Khanwilkar: "The supervisory committee will have all powers of the authority under the act which includes prosecuting, There is penal offence also for non-compliance of directions. Just see the outcome of how we are dealing with it. Then make your suggestions and then we will consider it. Right now you are not allowing any system to work. By keeping us busy, you are allowing status quo to prevail. You are anticipating too many things- that many things will not happen. Don't start on that note. Supervisory committee will be able to deliver all your aspirations and take care of all apprehensions. You can make a representation to the supervisory committee"

Justice Khanwilkar: "this is the first arrangement to be ensured. After that maybe all issues can be resolved. You have to give some timeframe for that and only then you can start making grievances. Before the committee is given that power, the committee actually moves into action, you start raising points just because you have something in mind? Can you go beyond the statute? We are giving all functions and powers of the authority to the supervisory committee. What more can be said about it? Make particular representations to the supervisory committee. We don't have to examine all grievances. That is their obligation. Don't come here straight for every grievance. One house is affected, it is not mean that we start looking at all issues. The supervisory committee in the first place will examine. The act is a very comprehensive act, you cannot say that this act is falling short in any areas"