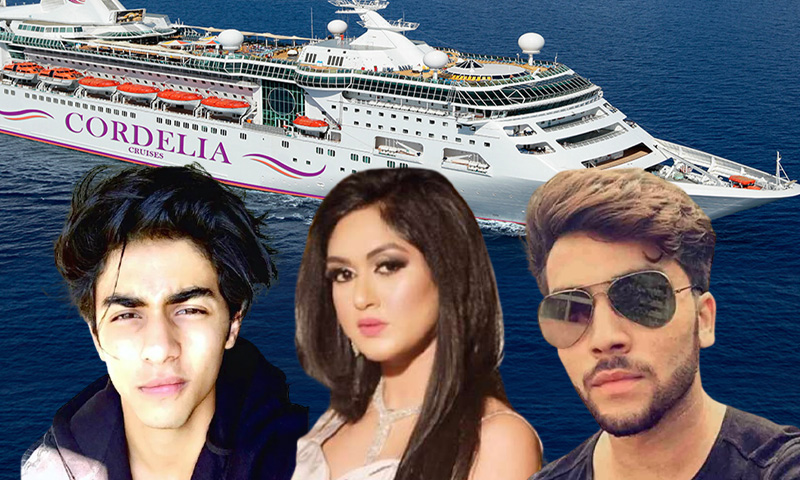 A Mumbai Court rejects bail applications filed by Aryan Khan, son of actor Shahrukh Khan, Arbaaz Merchant and Munmun Dhamecha accused in connection with the seizure of drugs on a luxury cruise ship off the Mumbai coast. Additional Metropolitan Magistrate RM Nilekar observed that the bail pleas are not maintainable, and are hence rejected. ASG Anil Singh, appearing for the...

A Mumbai Court rejects bail applications filed by Aryan Khan, son of actor Shahrukh Khan, Arbaaz Merchant and Munmun Dhamecha accused in connection with the seizure of drugs on a luxury cruise ship off the Mumbai coast.

Additional Metropolitan Magistrate RM Nilekar observed that the bail pleas are not maintainable, and are hence rejected.

ASG Anil Singh, appearing for the Narcotics Control Bureau, had opposed the bail pleas on the ground of maintainability. He argued that the offences alleged against the accused are exclusively triable by the Special Court of Sessions under the NDPS Act, not a magisterial court.

Yesterday, the Judge had rejected further NCB Custody for the accused and remanded them to judicial custody instead.

Advocate Satish Maneshinde appearing for Aryan Khan today argued that there has been no recovery from Khan and that the rigours of bail under Section 37 of the NDPS Act will not apply to him.

Advocate Taraq Sayed appearing for Arbaaz Merchant denied the allegation regarding recovery of 6 gm contraband. "I am shooting myself in the foot if contraband is found," he remarked while demanding access to CCTV footage of the incident.

Advocate Ali Kashiff appearing for Munmum Dhamecha also argued that she deserves to be released on bail given the fact that no recovery has been made from her and that the NCB has been unable to show her connection with other co-accused.

The ASG however alleged that the WhatsApp chats between accused supplier Aachit Kumar and Aryan Khan refers to "bulk quantities of drug".

Embargo on grant of bail u/s 37 NDPS not applicable to Aryan Khan: Maneshinde

Advocate Satish Maneshinde appearing for Aryan Khan argued that Khan is not accused of financing, which is punishable under Section 27A of the NDPS Act. Thus, the embargo on grant of bail under Section 37 of the Act will not apply to Khan.

"There is no material (against me), even in messages," he argued.

Maneshinde cited the bail order in Sohil Sk. Samir v. State Of Maharashtra, where the appellant was released despite intermediate quantity.

"I am a 23-year-old with no prior antecedents. I happen to be from Bollywood. I went on an invitation, refused when asked if I have drugs…Data from my mobile has been retrieved and sent for forensics…I have been found with nothing, not an ounce but so much capital is being made out of it," he remarked.

Maneshinde also relied on the judgement in Harsh Shailesh Shah v. State of Maharashtra where the Bombay High Court, while adopting the reformative approach for the two first-time offenders, granted bail in a case for possession and consumption of drugs.

In this case, it was held that prima facie purchasing drugs for another person at a party would not make one a drug peddler to attract the rigours of section 37 for bail under the NDPS Act.

Maneshinde added that Khan has deep roots in the society as his family lives in Bombay and he has an Indian passport. "I (Khan) am not going to abscond. There is no question of tampering. I should be granted bail," he submitted.

Opposing this submission, ASG Singh submitted, "What will have to be considered is how influential the people are…there is a chance of tampering…This is not an isolated case and any sort of protection in the nature of bail would hamper investigation."

"Even if they want to say I will tamper with evidence, they should come with a positive case of how I will do it. Just bald allegations! Just because I come from an affluent family doesn't mean I'll tamper with evidence. What influence have I used? I am suffering from the last six days," Maneshinde responded for Khan.

Nothing to connect Arbaaz Merchant with other accused: Sayed

Advocate Taraq Sayed appearing for Arbaaz Merchant argued that there is nothing on record to connect him with the co-accused.

Merchant has allegedly been found with 6 gms of charas. He has denied the allegation and has filed an application seeking access to the CCTV footage from when he was arrested.

The prosecution has opposed the said application saying that it will prejudice to the ongoing investigation.

"I am shooting myself in the foot if contraband is found. The court can ascertain the truth by a sentence in a reply," Sayed argued.

Earlier, Sayed had alleged that NCB has tried to prejudice the court that there are multiple seizures made.

"In these five days, is the NCB incompetent and inept to investigate 6gms of charas (allegedly recovered from him)? Where is the question of custody? They are saying they want to confront. How long does it take to confront?" he had argued while opposing NCB custody.

Contraband was found on the floor, no recovery from Munmun Dhamecha: Kashiff

Advocate Ali Kashiff appearing for Munmun Dhamecha argued that even according to the prosecution, the alleged contraband of 5 gms was found on the floor and two other people Somiya and Baldev were also present there.

"Why are they not arrested?" the counsel asked.

He argued that the NCB has alleged Damecha of having nexus with the recovery however, it hasn't even been able to show how she is connected to Aryan and Arbaaz.

In its reply however, the NCB has alleged that the contraband was recovered from Dhamecha's "conscious possession" and that there are WhatsApp chats, pictures to show her involvement in the illicit drug chain.

The reply filed by NCB opposing the bail plea filed by Munmum Dhamecha was accessed by LiveLaw.

Therein, the agency has claimed that all of these persons are an integral part of a common thread which cannot be separated and hence to be tried together before the Special Court of Sessions. In such situation the "quantum of recovery from an individual accused becomes inconsequential".

The reply adds that since there has been a seizure of commercial quantities of contraband, the case one applicant from whose person recovery is not made "cannot be considered in isolation" as every case is connected and is "intertwined with each other".

During the course of hearing, the ASG also alleged that the WhatsApp chats between accused supplier Aachit Kumar and Aryan Khan refers to "bulk quantities of drugs".

He added that the communication of the accused persons shows that they are not new to using contraband. "Therefore, it's not a coincidence," he said.

At the outset, the Respondents opposed the bail applications and filed a reply before the Court saying that the same are misconceived and not maintainable.

It was their case that the offences alleged against the accused are exclusively triable by the Special Court of Sessions under the NDPS Act, not a magisterial court.

The prosecution has relied on the case of Rhea Chakraborty v. Union of India, to argue that all the offences under the NDPS Act are cognizable and non-bailable, hence triable exclusively by a Special Court.

ASG Anil Singh therefore referred to the case of TK Latika v. Seth Karsandas Jamnadas, to argue that this preliminary issue be decided first, since, if the court comes to the conclusion that the application is not maintainable, then there is no point in going into the merits of the case.

"I am surprised that my senior is citing a civil judgement in a criminal case," Advocate Sayed responded to the ASG's objection.

Maneshinde on the other hand argued that the bar under Section 37 of the NDPS Act does not apply in the instant case hence, bail can be considered by this court.

He further argued that Section 36A of the NDPS Act, which provides that all offences attracting imprisonment for over 3 years are triable by the special court, does not apply in the present case.

He relied on the judgement in Sanjay Narhar Malshe v. State Of Maharashtra to argue that the court is governed by CrPC and while there are several offences that are triable by special courts but, bail can still be considered by the Magistrate's court.

To this, the ASG responded that the Sanjay Nahar Malshe's case supports the NCB's case that only Special Court is competent to hear the matter.

"The sum and substance of the judgement is...If there is no bar under the Act, the Magistrate can consider bail. But when there is a bar like under Section 36A of the NDPS Act, it will go to the special court," he said.

"They may choose to say that the special court can try the offence. But this court's role is not limited to remanding the accused. The court is supposed to analyse the evidence and the court has the power to even discharge me, if no evidence is found."

However, the ASG continued,

He stated that in the case of Harsh Shailesh Shah (supra) cited by Maneshinde where an intermediate quantity of contraband was recovered, bail was rejected by the Sessions Court (special court) and then they approached the High Court.

The ASG cited another judgement where even with a small quantity of alleged seizure, the bail application was decided by a special court.