'Why Is Your Enthusiasm More Apparent?' : Mumbai Police Objects To ED Appearing In TRP Case Against Republic TV 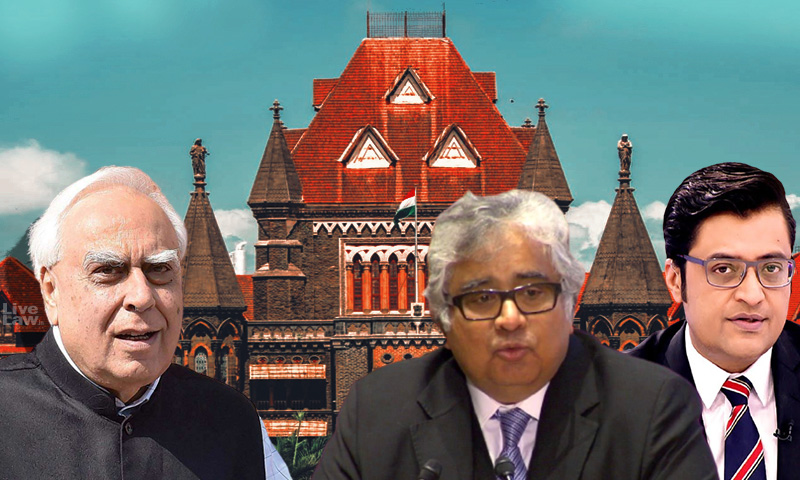 The hearing of the TRP case in the Bombay High Court witnessed dramatic scenes on Friday with Senior Advocates Harish Salve and Kapil Sibal exchanging words over the appearance of Enforcement Directorate in the matter.The Court was hearing the writ petitions filed by ARG Outlier Media Pvt Ltd (the company which runs Republic TV channels) challenging the investigation of Mumbai police in the...

The hearing of the TRP case in the Bombay High Court witnessed dramatic scenes on Friday with Senior Advocates Harish Salve and Kapil Sibal exchanging words over the appearance of Enforcement Directorate in the matter.

The Court was hearing the writ petitions filed by ARG Outlier Media Pvt Ltd (the company which runs Republic TV channels) challenging the investigation of Mumbai police in the case related to rigging of TRP ratings by private news channels. The petitioner ARG Outlier filed an application to implead the Enforcement Directorate - which has filed a money laundering complaint over TRP rigging - as an additional respondent in the petition.

Senior Advocate Harish Salve, appearing for ARG Outlier Media Pvt Ltd, submitted that if the findings of ED in the case are different from those of the Mumbai police, it means that the latter is acting with malice against Republic TV and its main anchor Arnab Goswami.

The appearance of ED in the matter was strongly objected to by Senior Advocate Kapil Sibal, appearing for Mumbai police.

"I have strong objections to ED appearing in this matter. Why is your enthusiasm more apparent? Obviously you want to support him", Sibal submitted.

"I know about your dishonesty and ED's honesty", Sibal added responding to Salve.

In a sharp retort, Salve said, "It is interesting that my learned friend appearing for the Maharashtra government is calling a Union agency dishonest."

"I said you are dishonest", Sibal replied to Salve.

"This is a a very serious matter. A state is calling a Union agency dishonest!", came Salve's response.

ASG Anil Singh submitted that the ED has filed an affidavit in the impleading application filed by ARG Outlier and added that a status report can be filed in a sealed cover. Sibal opposed ED filing a status report, asserting that Mumbai police has the jurisdiction to investigate the case.

A bench comprising Justices SS Shinde and Manish Pitale adjourned the further hearing in the case till January 29 after Sibal sought time till next Monday to file reply to the arguments of Salve regarding lack of jurisdiction of Mumbai police to investigate the case. Though the bench initially suggested posting the case to January 22, Salve expressed that he has certain difficulties on that day. Accordingly, the matter was posted to January 29, for virtual hearing. The bench is holding virtual sittings only on Fridays.

On Friday, Salve started submissions by saying that the Mumbai police case was "politically motivated" to "settle scores" with Arnab Goswami.

"The proceedings start with Mumbai police commissioner calling a press conference, with a glee on his face, against Mr Goswami", Salve said. He submitted that the Mumbai police investigation has 'drifted off' into areas where they have no jurisdiction.

He submitted that none of the allegations make out any offence even remotely.

On the previous hearing date, January 6, Sibal had told the bench that Mumbai police has found more evidence against Republic TV in the TRPS cam case and therefore the interim protection cannot continue beyond January 15.  But on Friday, Sibal agreed to extend the protection till January 29 as the hearing was getting adjourned. The bench also took on record the status report filed by Mumbai police.  Earlier this week, the Mumbai police filed a 3400-page supplementary chargesheet in the case against Vikas Khanchandani, CEO of Republic TV; Romil Ramgarhia and Partho Dasgupta, CCO and CEO of Broadcast Audience Research Council (BARC), respectively.

The TRP Scam FIR was registered by the Mumbai police in October last year.
In November, the Mumbai Police Crime Branch filed a 1,400-page chargesheet in the case, naming six channels, including those of Republic Media Network and News Nation, as allegedly paying money to boost TRPs for around two years.
The company running Republic TV channels and Goswami moved the High Court seeking to restrain coercive action by Mumbai police and handing over of the investigation to the CBI.
Meanwhile, the police arrested the Republic TV CEO Vikas Khanchandani in the case. The police also sought to arrest the Chief Operating Officer of the channel, Priya Mukherjee, in the case. However, she was granted anticipatory bail by the court.

In December, he former CEO of BARC, Partho Dasgupta, was arrested by the Mumbai police. On January 5, a Magistrate in Mumbai denied Dasgupta - who was BARC CEO from June 2013 to November 2019 - bail observing that he "manipulated TRP for particular TV channels by using his office as CEO of BARC".