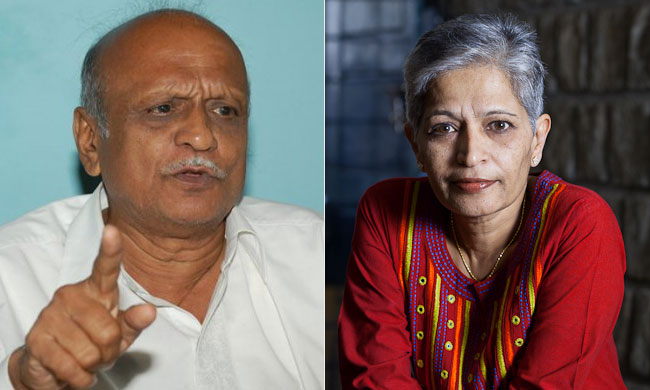 The Supreme Court bench of Justices R F Nariman and Vineet Saran today observed that there were similarities between the murders of Kannada scholar M M Kalburgi and Bangalore based journalist Gauri Lankesh.

The bench therefore ordered that the Special Investigation Team already constituted by the Karnataka Government to probe Lankesh murder should investigate Kalburgi case as well. The probe will be monitored by Dharwad bench of Karnataka High Court.

The order was passed in a petition filed by Umadevi Kalburgi, widow of M M Kalburgi, seeking CBI probe in the case.

She had alleged that there was common link between the murders of her husband and that of activists Narendra Dabholkar, Govind Pansare and Gauri Lankesh.

CBI, which is investigating Dabholkar murder on directions of Bombay High Court, had informed a Court in Pune last August that the murders of Dabholkar and Lankesh were linked. This significant submission was made when the agency was seeking the custody of one Sharad Kalaskar, who was nabbed in relation to the case.

Dabholkar, a Pune-based anti-superstition activist, was shot dead while he was on morning walk in August, 2013. Govind Pansare, a CPI leader and author of the book "Who was Shivaji?", was shot dead in February 2015. Kalburgi, a professor and author, was shot dead in August 2015. Lankesh, a Bangalore based journalist, was shot dead in front of her residence in Bengaluru in September, 2017. It is alleged that the murders were handiworks of right-wing fundamentalists, who were opposed to the ideas expressed by the slain authors/activists.

On December 11, last year, the apex court had favoured a CBI probe into the murders of Kalburgi, social activist Govind Pansare and journalist Gauri Lankesh if there appeared a "common thread" in these incidents.

During the hearing today, Justice Nariman observed that if the four murders were linked, then they should be investigated by one agency.

At this point, Karnataka government submitted that they have already constituted an SIT to probe Lankesh murder.

Based on this, the Court ordered that the SIT to take over the investigation of Kalburgi case as well.