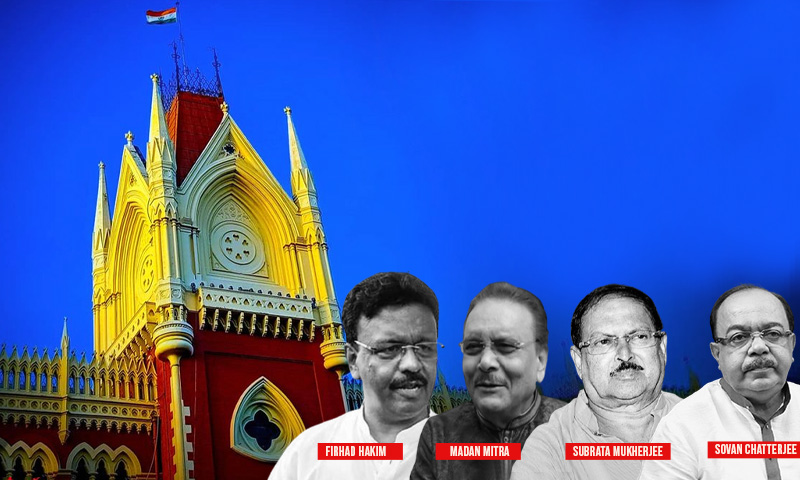 A 5-Judge Bench of the Calcutta High Court comprising of ACJ Rajesh Bindal, Justices Harish Tandon, IP Mukerji, Arijit Banerjee and Soumen Sen on Monday adjourned hearing in the case pertaining to bail of four Trinamool Congress leaders, who have been in custody since May 17 since their arrest by the CBI in the Narada Scam Case. The Bench will continue hearing the case day...

A 5-Judge Bench of the Calcutta High Court comprising of ACJ Rajesh Bindal, Justices Harish Tandon, IP Mukerji, Arijit Banerjee and Soumen Sen on Monday adjourned hearing in the case pertaining to bail of four Trinamool Congress leaders, who have been in custody since May 17 since their arrest by the CBI in the Narada Scam Case.

The Bench will continue hearing the case day after tomorrow.

When the hearing started, the Solicitor General Tushar Mehta, appearing for the CBI, made a request for deferring the hearing till day after tomorrow, as the CBI has approached the Supreme Court against the May 21 order allowing house-arrest of the TMC leaders, and that the agency is trying to get the matter listed tomorrow in the top court.

The bench did not immediately adjourn the hearing, and held over a two hour long hearing on the issues to be formulated in the case. Full minute-by-minute account of the hearing may be read here.

SG Tushar Mehta, Advocate General Kishore Dutta and Senior Advocates AM Singhvi and Siddhartha Luthra made submissions regarding the issues which can be formulated in the case.

Justice IP Mukerji observed that one of the issues is that if the accused have not been arrested during investigation for over 7 years, what is the occasion for arrest suddenly after filing chargesheet.

"If the power of arrest has not been exercised for over 7 years, why should they be arrested suddenly now? This is one of the issues," the Judge said.

However, the Solicitor General submitted that this would have been an issue if the court was considering the issue of bail. "Since the issue is vitiation of the trial court proceedings on account of the mass protests, this alone cannot be the consideration," he contended.

Justice Soumen Sen said another issue is whether the bail already granted can be stayed while exercising powers of transfer under Section 407 CrPC and without an application for cancellation of bail under Section 439(2) of CrPC.

To this, Senior Advocate AM Singhvi submitted that Section 407 CrPC application made by CBI before the High Court does not make out any circumstances for exercising of powers by the Court.

He reiterated that the test for Section 407 application is if the judge was not able to hear the matter or the counsels were prevented from arguing.

"The trial court heard the matter virtually. The learned Special Judge does not give any hint of either access to justice being disturbed or hearing being obstructed. The test of martial law is courts cannot function. The Special Judge gives no such indication," he submitted.

Solicitor General Tushar Mehta submitted that orchestrated attempts were made to prevent the arrest of the four TMC leaders and their production before the Magistrate.

He sought a declaration that Trial Court proceedings of May 17 are void and non-est in law and urged the High Court to de novo hear the arrested TMC leaders' bail applications.

In this regard, the SG stated that the CM-led dharna outside CBI office and subsequent stone-pelting had a 'terrorizing effect' and prevented the agency from arguing its case properly. He submitted that even the physical copy of the case diary could not be produced before the Trial Court and ultimately the bail order came to be passed.

The SG responded that a detailed application under Section 407 of CrPC for transfer was filed on 19th May. He told the Bench that the agency had also invoked the writ jurisdiction of High Court under Article 226 of the Constitution and Inherent Powers under Section 482 of CrPC, seeking to declare Trial Court proceedings of May 17 void and non-est in law.

However, Singhvi asked if an application moved at a later stage can be give "retrospective validation" to the letter and oral mentioning made on 17th.

The SG argued that the first issue is whether the Court can act on a letter and an oral submission made by the investigating agency when the incidents were happening in public glare. Entire media was capturing it, the SG said.

The second issue, the SG pointed out, pertains to the contours of the court's jurisdiction under Section 407.

The third issue would be, he said, whether the Division Bench could have considered the matter, when bail and transfer are before the single bench as per roster.

Both Luthra and Singhvi argued that Bail cannot be cancelled in exercise of powers under Section 407 CrPC. They also pointed out that the division bench order was passed without hearing the accused and the so-called interim relief is in the nature of final relief as the personal liberty of the four leaders continues to be curtailed.

"Is there a valid exercise of Section 407 CrPC powers by the Hon'ble Division Bench on May 17 including the power to stay bail already granted? This is issue number 1," Singhvi said.

"Bail is a judicial order. It cannot be cancelled under Section 407 or Article 226. The only remedy is Section 439(2) CrPC or 482, if there is pervesity. There are no circumstances to invoke 482…The issue of liberty is sacrosanct. Even judicial custody is a curtailment of liberty."

He further argued that there cannot be a transfer of the case to the High Court as it is a special offence and special court. He submitted the CBI's request is contrary to precedents such as AR Antulay.

The counsels also opposed CBI's plea to declare Trial proceedings as vitiated. Singhvi dubbed the gatherings as 'democratic protests' and submitted that mere presence of protestors outside Trial Court did not affect the judicial proceedings as the hearing was virtual.

He submitted that there is only one issue— whether the persons who were granted bail by the Trial Court should be released on liberty. "Should the order of special judge of May 17 be allowed to operate? That is the only issue," he said.

"Procedure must be the handmaiden of justice, especially when personal liberty is involved. Is there a valid exercise of Section 407 powers by the hon'ble division bench on May 17 including the power to stay bail already granted?"

The second issue, Singhvi said, is whether the accused were entitled to bail and could the bail already granted be reversed?. The third issue he said is the effect of not hearing the accused, as a facet of natural justice and fair play, while reversing bail.

Singhvi also question the legality of arrest as the CBI did not obtain sanctions from the Speaker, before effecting the arrest.

"The sanction from Governor is bad in law since as per Constitution Bench judgments Speaker is the authority to grant sanction with respect to legislators," he submitted.

Singhvi insisted that the triple tests of bail are satisfied in the case and there is no flight risk of accused, as they are MLAs and Ministers, and the arrest happened after 7 years.

In this context, Luthra submitted,

"It is a case where there is abuse of power of arrest. Voice samples were taken in 2019. Without getting a report on the voice samples, which is the only evidence, a chargesheet was filed. Chargesheet was placed before the Governor.

Advocate General also submitted that the Calcutta High Court has no original criminal jurisdiction and therefore there is the issue whether the CBI prayer to transfer to the HC that case is untenable.

On May 17, theDivision Bench had stayed the bail granted by the Special CBI Court at Kokata to four Trinamool Congress leaders - Firhad Hakim, Madan Mitra, Subrata Mukherjee and Sovan Chatterjee - who were arrested dramatically by CBI on May 17.