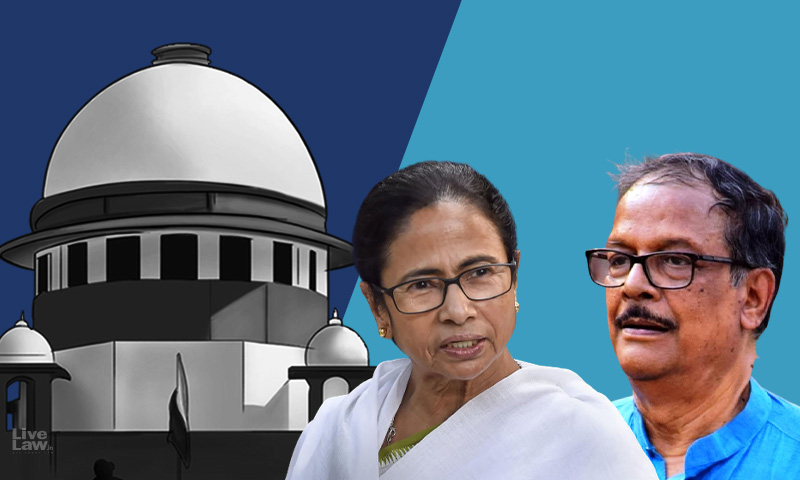 The Supreme Court on Friday directed the State of West Bengal, West Bengal Chief Minister Mamata Banerjee, and the State Law Minister Moloy Ghatak - who are challenging the refusal of the Calcutta High Court to accept their affidavits filed in the Narada case - to file an application before the High Court stating the reasons for not filing such affidavits earlier.They are directed to...

The Supreme Court on Friday directed the State of West Bengal, West Bengal Chief Minister Mamata Banerjee, and the State Law Minister Moloy Ghatak - who are challenging the refusal of the Calcutta High Court to accept their affidavits filed in the Narada case - to file an application before the High Court stating the reasons for not filing such affidavits earlier.

They are directed to file the applications by June 28, after serving advance copies to the CBI on June 27. The CBI has been given liberty to file reply to the applications.

The Supreme Court further requested the High Court to decide first the applications seeking acceptance of affidavits on the next scheduled hearing date, June 29.

To facilitate this arrangement, the Supreme Court set aside the June 9 order passed by the High Court, wherein it had refused to take on record the affidavits filed by the State, Chief Minister and Law Minister in the CBI's transfer plea in the Narada Scam case.

"...we are of the opinion that the petitioners ought to have given an application to take the respective counter-affidavits on record, especially when the submissions of the parites were going and had progressed substantially. At this stage, a suggestion was made by this court that the matter could be remanded to the High Coiurt to decide afresh on the basis of the reasons given in the applications filed by the petitioners within the specified time. The counsel for the parites have graciously agreed to the suggesion of this court", the Supreme Court recorded in the order.

A vacation bench comprising Justices Vineet Saran and Dinesh Maheshwari said that it was not going into the merits of the matter and was confining itself only to the issue of grant to time for filing counter-affidavits.

Submissions of CM and Law Minister

In today's hearing, Senior Advocate Rakesh Dwivedi appeared for Chief Minister Mamata Banerjee and Law Minister Moloy Ghatak.  He submitted that the effective arguments before the larger bench started only on May 31. On May 27, the larger bench said that it was going to decide first the applications for recall filed by the TMC leaders against the stay of their bail order.

On June 2, the CBI filed an additional affidavit. The Solicitor General finished his arguments for CBI on June 3. There was no hearing on June 4, 5 and 6. The State filed its counter on June 7. Banerjee and Ghatak filed their counter-affidavits on June 9. The counter-affidavits of Banerjee and Ghatak were necessary in view of the allegations made by the CBI that the protests led by them on May 17 against the arrest of TMC leaders vitiated the bail hearing before the Special CBI Court at Kolkata.

"The bench refused to accept the counter-affidavits saying that it was an attempt to fill the lacunae after the arguments of Solicitor General. The concept of 'not-allowing filling of lacunae' is only there in civil proceedings and not in criminal proceedings", Mr.Dwivedi submitted.

Submissions of State of West Bengal

Senior Advocate Vikas Singh, appearing for the State of West Bengal, said that the High Court rules give right to a party to file a reply. It was only out of courtesy that the State sought permission to file reply; there was no need to ask such permission, since it as a right.  Such right cannot be presumed to be given up. Only if the High Court has given a time-limit for filing reply, the filing of counter-affidavit can be barred beyond such time-limit, Mr.Singh said.

The State was impleaded as party only on May 27. The Chief Minister and Law Minister were served notice also only on May 27. State has raised an objection to the maintainability of the petition on May 31.

What was filed by the CBI on June 2 was not an affidavit as such, but only a chronology of events, which was submitted on the basis of request made by the bench after the completion of oral arguments on May 31, the SG said.

He said that the state was represented throughout the hearing and they waited till June 9. taking a "calculated risk", to file the affidavits belatedly, to "fill up the lacunae" in the case.

The Solicitor General also suggested that the Supreme Court could ask the parties to make a request before the 5-judge bench of the Calcutta High Court seeking permission for filing affidavit.

Bench suggests parties approach the HC with an application

At this stage, Justice Saran asked Senior Advocate Vikas Singh, if any application was filed along with the affidavit seeking permission for take it on record.

"You were aware of the proceedings from Day 1. You chose to file it on 7 and 9. There could a presumption that you waived your right. Whether that presumption is right or not we is another matter. Why you haven't, there should be an explanation. Is there any application?", Justice Saran observed.

"If in the midst of hearing, if you want to place anything on record, probably you were required to move an application indicating why the affidavit could not be filed earlier", Justice Maheshwari added.

The bench said that it could remand the matter to the High Court if the parties agree to file such an application.

"The reasons stated in the impugned order will come in our way", Dwivedi replied.

The bench said that it will ask the High Court to consider the matter afresh. The Solicitor General said the the right of the CBI to oppose such an application should be reserved. The bench told the SG that such a right follows the liberty granted to the parties.

Senior Advocate Vikas Singh said that if CBI could be allowed to file an affidavit without an application on June 2, the state could not put to a different treatment. The bench said that it was not going into the merits of the dispute and will leave all contentions open to be raised in the application.

The bench said that it will set aside the June 9 order, and will ask the parties to file the application to accept the affidavit on June 28. The High Court is slated to hear the matter next on June 29.

At the previous hearing, the Bench had adjourned the matter as the same had been listed during the course of the day on account of Justice Aniruddha Bose recusing. The Court further extended the order of the Bench headed by Justice Hemant Gupta on 18th June, pertaining to the Calcutta High Court being requested to not take up the matter before the instant pleas are heard.

The impugned 9th June order of the Calcutta High Court observed that the Chief Minister, Law Minister and the State had "waited for the arguments in the case to be substantially completed before seeking to place on record their pleadings in response…It is nothing else but filling the lacunae or supporting the accused. That is why, even the learned Counsels appearing for the accused are also supporting the prayer made by the State for taking these belated affidavits on record".

It was further noted by the High Court that, "The Respondents have taken a calculated risk in not filing their affidavits at the right time, now they cannot be allowed to do so at their own whims and fancies, whenever they wish to do the same. Urgency of the matter could be appreciated on behalf of the accused, who were in custody but it cannot apparently be on behalf of the State, hence, if the State or other persons impleaded by the CBI wanted to file their response, time could have been sought at that time and not when the arguments are at an advanced stage".

The pleas filed before the Supreme Court submit that rights of the State should not be hampered, especially when the CBI was allowed to file additional affidavits. This was also argued by Senior Advocate Rakesh Dwivedi, appearing for the Law Minister, who submitted that it was a question of justice, and that if the affidavit was ignored, the interests of justice would not be served.

However, Solicitor-General Tushar Mehta had objected to the affidavits being taken on record in light of the arguments being completed.

While the Supreme Court had earlier heard the petitions filed by the State and the State Law Minister, a new petition on the same issued has been filed by Chief Minister Mamata Banerjee as well.

Directions issued by the Supreme Court

(i) In view of the fact that 29.06.2021 is the date fixed before the High Court, we direct that the petitioners may file their respective applications giving reasons to bring the counter affidavits filed by them on 07.06.2021 and 09.06.2021 respectively on record, by Monday i.e. 28.06.2021, after serving advance copies on the counsel for the Central Bureau Of Investigation and other necessary parties, on or before 27.06.2021. The Central Bureau Of Investigation and other parties, if they so desire, may file their reply to the application by 29.06.2021, after serving an advance copy to learned counsel for the petitioners by 28.06.2021.

(ii) We request the High Court to first decide the aforesaid applications of the petitioners herein, for taking the counter affidavit/affidavits in response on record, before proceeding to decide the merits of the 5 case.

(iii) We may further add that to avoid any prejudice to be caused to any of the parties, the order dated 09.06.2021 shall stand annulled and the High Court shall decide the matter de-novo. It goes without saying that after deciding the aforesaid applications of the petitioners, the High Court shall decide the further course of action and proceed with the matter accordingly.