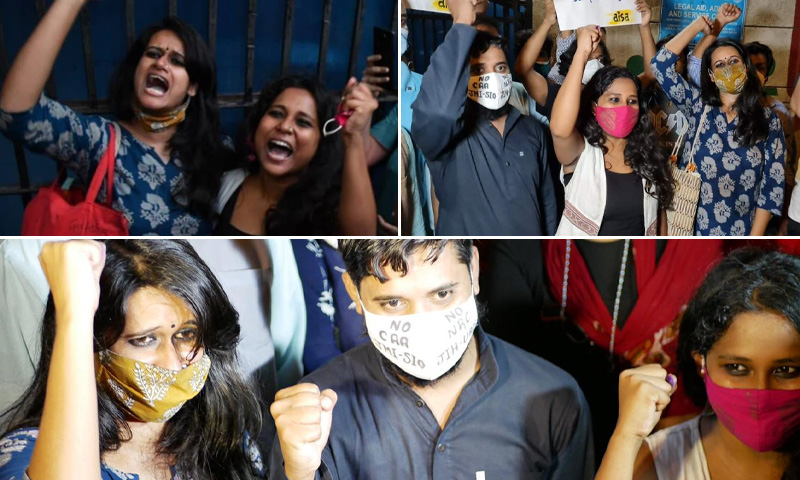 Student activists Natasha Narwal, Devangana Kalita and Asif Iqbal Tanha have been released from Tihar Jail after the Delhi High Court granted them bail on June 15 in the case related to Delhi riots conspiracy.The development came after a Delhi Court issued orders for their immediate release earlier today after observing that Delhi Police's argument saying that more time was needed to verify...

Student activists Natasha Narwal, Devangana Kalita and Asif Iqbal Tanha have been released from Tihar Jail after the Delhi High Court granted them bail on June 15 in the case related to Delhi riots conspiracy.

The development came after a Delhi Court issued orders for their immediate release earlier today after observing that Delhi Police's argument saying that more time was needed to verify the addresses of the accused and their sureties, cannot be a plausible reason for keeping them imprisoned.

"I observe that atleast verification process qua sureties should have been filed by 1 PM yesterday all sureties are residents of Delhi. Apropos the reason forwarded by IO that verification qua accused's permanent address would need time, I would say that this by itself cannot be a plausible reason for the accused to be kept imprisoned till the time such reports are filed."

Observing that it will be expedient in the interest of justice, the Court accordingly ordered thus:

"The accused is directed to be released forthwith as per Orders of Delhi High Court. Since the verification of permanent address of accused shall require sometime, let the Report to this effect be filed by IO on or before 23.06.2021 at 2 30 PM with the concerned court."

The release warrant should be immediately prepared and be sent to the Jail Superintendent via email, the Court had ordered.

Earlier, Additional Sessions Judge Ravinder Bedi of Karkardooma Courts had deferred orders on their release after Delhi police sought time to verify the addresses of the accused and sureties.

Meanwhile, the activists had approached the Delhi High Court today morning aggrieved with the Trial Court deferring their release despite the bail granted to them. A division bench of Justices Siddharth Mridul and Anup Jairam Bhambhani (which granted bail) observed that the trial court should consider the matter expeditiously and asked the parties to appear before the trial court at 12 noon today. The High Court will consider the matter today at 3.30 PM.

The Trial Court had yesterday reserved the orders on the release of Natasha Narwal, Devangana Kalita and Asif Iqbal Tanha. The pronouncement was deferred to 11 AM today citing "heavy board" after the Delhi Police had moved an application seeking some more time in conducting the verification of their addresses and also the Aadhar verification of their sureties.

The Delhi Police had stated that the outstation permanent addresses of student activists need to be verified for the purpose of their release pursuant to the Delhi High Court orders granting them bail.

Apart from this, the Delhi Police also sought directions to the UIDAI to verify the Aadhar card details of the sureties.