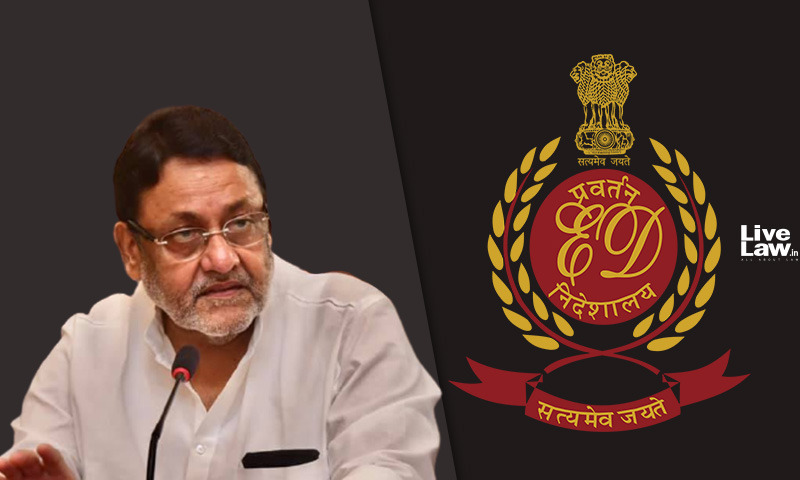 Maharashtra Cabinet Minister and NCP leader Nawab Malik has filed a Special Leave Petition in the Supreme Court seeking his immediate release in the money laundering case being investigated by the Enforcement Directorate. The petition stems from the Bombay High Court's order of March 15, 2022, refusing interim release in a habeas corpus petition filed on the ground that his...

Maharashtra Cabinet Minister and NCP leader Nawab Malik has filed a Special Leave Petition in the Supreme Court seeking his immediate release in the money laundering case being investigated by the Enforcement Directorate.

The petition stems from the Bombay High Court's order of March 15, 2022, refusing interim release in a habeas corpus petition filed on the ground that his arrest was "completely illegal," consequently challenging the Special Court's order remanding him in custody.

The ED alleged that Parkar and Malik usurped a property in Kurla from one Munira Plumber. In 2003 Malik, through his family, bought a company called Solidus Investments Private Limited – which was also a tenant on the concerned property. He then, through Solidus, paid Parkar the money to get ownership rights for the land in 2003 and September 2005. And since Parkar was allegedly a part of Dawood's gang, the money paid to her became proceeds of crime, the ED claimed.

While rejecting Malik's prayer for interim relief the HC had observed that "certain debatable issues are required to be heard at length," however, requirements of arrest under section 19 of PMLA were prima facie complied with.

Significantly, it had also observed that, prima facie, claiming that a property is untainted would amount to an offence under section 3 of the PMLA 2002.

Malik claims that since his petition was strictly on the law, the HC couldn't have given a prima facie finding regarding section 3 of PMLA without reasoning.

"The High Court also already having taken a prima facie view that debatable issues arose, could not have then gone on to take a contrary prima facie view on Section 3 of PMLA, without any reasoning as to how in the present case, there was any predicate offence, let alone any offence under PMLA with regard to the Petitioner."

Malik has claimed that High Court while issuing rule has upheld that deprivation of the liberty, and refused to grant interim release, in violation of settled position in Arnab Manoranjan Goswami vs. State of Maharashtra (2021) 2 SCC 427 and the established principles in a writ of habeas corpus.

"The arrest therefore being illegal and in violation of fundamental rights of the Petitioner as well as statutory provisions, he was entitled to a Writ of Habeas Corpus."

Malik claims his arrest was illegal as he was picked up in the wee hours without issuance of summons u/s 41A of the CrPC. "ED sought to carry out this entire exercise on the purported strength of a transaction from more than 22 years ago, at a time when the PML Act was not on the statute book," the petition adds.

Malik states that the FIR against Dawood, based on which the ECIR is registered against him neither the crime, nor the duration has been set out.

Moreover, ED's case is based on Munira's denial of a supplementary Irrevocable Power of Attorney dated July 23, 1999 given by her to Salim Patel (now deceased driver of Haseena) by which he was allowed to deal with the property, including transfer it.

Before that, in March 1999 also she had executed a PoA. It's ED's case that Malik's family dealt with Parkar through the driver buoyed by the PoA.

Malik's contentions before the Supreme Court are as follows:

Petition was purely on legal grounds. First that the alleged fraudulent transaction took place in 1999 when the Power of Attorneys were executed in favour of Salim Patel. In 1999 PMLA was neither legislated nor notified and did not form part of the Statute book and hence, PMLA cannot be applied retrospectively.

Even if the 2005 transaction is considered, even then the transaction would not form part of any of the scheduled offences in Part A or Part B of the PMLA as it then existed in 2005. "Hence, it was the Petitioner's case that there was no offence when the property purchase transaction was completed and hence, there cannot be any retrospective application to the amendments of 2013 as well as 2019, which would otherwise violate Part III of the Constitution of India."