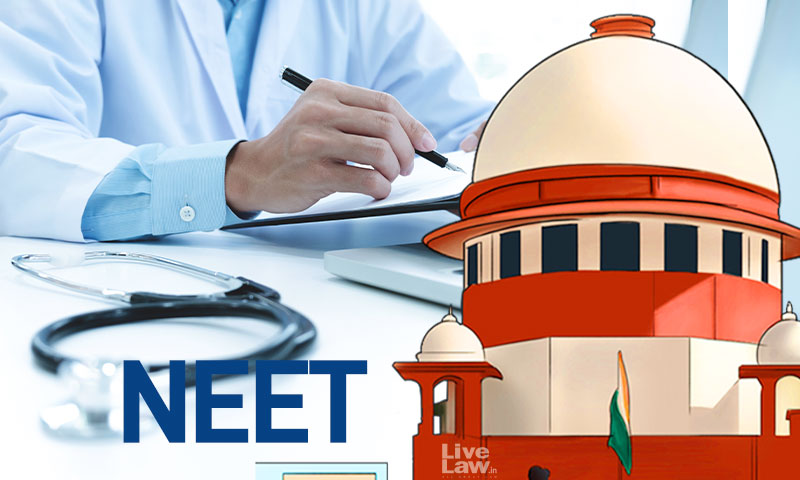 The Apex Court had sought the response of NMC, on the last date of hearing i.e. 04.02.2022 in a petition filed by a NEET-UG candidate who claimed to have passed her 10+2 courses as a private student. Senior Advocate, Mr. S.K. Gangele appearing on behalf of the petitioner had averred that though the petitioner has been admitted for counselling, the State of Madhya Pradesh is insistingthat she submits the Class 11 marksheet. He claimed that other States were not urging on making such submissions. In view of the same, Advocate, Mr. Guarav Sharma appearing on behalf of NMC had been asked by the Court to seek instructions.

Appearing before a Bench comprising Justices L. Nageswara Rao and B.R. Gavai, Mr. Sharma submitted that the requirement to submit marksheet for Class 11 is not there at the time of counselling. However, at the time of admission it would be required to verify if the student has undergone the Class 11 course.

"Milord, the requirement of giving 11th marksheet is not there at the time of counselling. Anybody who has not passed 11, they are not allowing them to continue. Because documents are verified at the time of admission."

In order to seek confirmation, the Bench reiterated, "He is saying that the other states are permitting. He has shown some papers for Himachal Pradesh."

In response, Mr. Sharma submitted that -

"Even HP has a requirement."

He further argued that when the eligibility criteria for NEET-UG was challenged before the Delhi High Court, upon consideration it had only struck down the exclusion of students undergoing requisite courses from open school and as private students, but had not struck down the requirement to complete 10+2 courses.

"I have a new submission as per the brochure, even after the struck down of proviso they are not eligible to sit in the NEET. I have the affidavit filed by National Open School before the Delhi High Court where they had said that there is a requirement of two years of study for these type of education."

"Let us have some clarity on this. What do you mean by two years of education. Do they have to complete 2 years course or do they have to write examinations for 11th as well as 12th?"

Mr. Sharma submitted that the eligibility criteria was that the aspirants have to study for two years, 11th and 12th.

"So, this petitioner has not studied for two years?"

Mr. Sharma referred to the list of dates wherein it has been stated that the petitioner has not passed 11th standard.

"That is not clear. In the list of dates they have said that they have not passed 11. They have done their 10th in the year 2013 and 2016 and thereafter there is no submission as to what they were doing."

Mr. Sharma submitted that the petitioner has not studied Physics, Chemistry, Biology and English for two years, which is the requirement to meet eligibility criteria. He referred to Code 2 in the NEET Brochure and the Brochures issued by different States in consonance with the eligibility criteria set out in Code 2.

"Code 2: The Higher/Senior Secondary Examination or the Indian School Certificate Examination which is equivalent to 10+2 Higher/Senior Secondary Examination after a period of 12 years study, the last two years of such study comprising of Physics, Chemistry, Biology/Bio-technology (which shall include practical tests in these subjects) and Mathematics or any other elective subject with English at a level not less than the core course for English as prescribed by the National Council of Educational Research and Training after the introduction of the 10+2+3 educational structure as recommended by the National Committee on Education.

He clarified that though candidates who have passed from open school or private candidates have been, now, found to be eligible by the Delhi High Court, the requirement of passing 10+2 was never struck down.

"The problem is that there is only one examination that is for class 12. That is why the maksheet is only issued for class 12."

The Bench noted that in the list of dates it is mentioned that the petitioner did not appear for Class 11 course. However, as per rules and regulations they were permitted to appear in 10+2. The Bench emphasised that nowhere in the petition it has been asserted that she has undergone a 2 years course.

"Kindly see that the course is 2 years. They have studied for two years. That is why they have passed the examination. That is why Class 12 marksheet have been issued."

He asserted that most of the other states have not forced candidates to submit Class 11 marksheet.

Mr. Sharma suggested that the petitioner should clarify if they had taken up Class 11 courses, as the same would squarely determine their eligibility.

"Let them clarify that if they have studied 11th, they are eligible. If not then they are ineligible."

The Bench was of the opinion that there was a confusion, as generally if the Class 11 course is undertaken there ought to be some formalities that the student has to undergo. It stated that Mr. Gangele has not filed any material to show that the petitioner had indeed undergone the Class 11 course, which he had so vehemently submitted during the course of the hearing.

"There is a gap between what you are saying. There will be a course and an examination conducted by schools. A formality will be gone through. Some better institutions also fail students in 11th. No material has been filed to show that you have undergone the course. We will hear the matter with other matters."