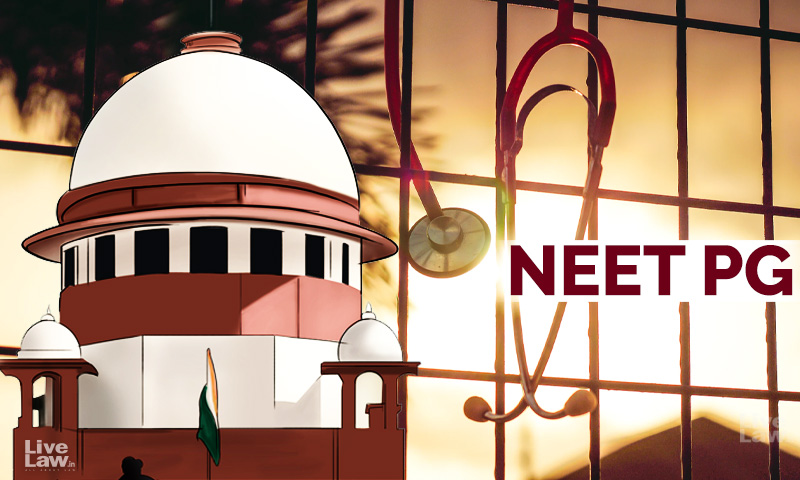 The Supreme Court was informed on Thursday that the National Board of Examination has granted the request made by two pregnant candidates for change of exam centre for NEET-PG 2021.Recording this submission, a bench comprising Justices UU Lalit, S Ravindra Bhat and Bela M Trivedi disposed of the writ petition filed by the candidates seeking option to change centre.On August 31, the bench...

The Supreme Court was informed on Thursday that the National Board of Examination has granted the request made by two pregnant candidates for change of exam centre for NEET-PG 2021.

On August 31, the bench had issued a limited notice only with respect to two petitioners- petitioners 1 and 2- who were pregnant.

Today, Senior Advocate Kavin Gulati, appearing for petitioners 1 & 2 informed the bench that the NBE has permitted for change of centre for them.  He further submitted that there is another petitioner who is in 9th month of pregnancy whose request for change of centre also needs to be allowed. Additional Solicitor General Maninder Singh, appearing for the NBE, told the bench that the said request will also be granted.

Taking note of the fact that the request of the petitioners have been met, the Supreme Court disposed of the writ petition.

The petitioners were represented by Dubey Law Associates and the petition was filed through Advocate on Record Charu Mathur.

The plea argued that the choice of center made by the candidates on earlier location was on the basis of their nearest location to their centres as on April 18, 2021. It is also pertinent to mention that NEET PG 2021 was firstly scheduled for April 18, 2021 and thereafter it was postponed and scheduled for September 11, 2021.

The doctors in their plea have sought directions to the National Board of Examination to allow the candidates the "centre change option" in view of the subsequent events from the date when the exam was last scheduled i.e. April 18, 2021 and allow the candidates who were posted in Covid duties or were undergoing compulsory training/ bondas on April 18, 2021 to choose center on the basis of their current location and not the previous posting location.

Relief for directing the National Board of Examination to allow the edit window for change in center with immediate effect had also been sought for.

The plea had also averred that the exact location of the center was informed to the candidates only when the admit cards were released.

"The distance between the earlier chosen city for the centre was totally on the basis of the covid duty posting area and on the basis of other covid related reasons. However, almost after 4 months of postponement of exam, the Petitioners have been overtaken by events and that they humbly place a request for the centre change window as most of them did not made choice of their centre as their base location," the plea stated.

Doctors in their plea had also argued that due to the upsurge in CoVID cases, the final year MBBS students were required to apply for bond service and the candidates who applied for the same had chosen the center as per their posting schedule which is different after lapse of more than four months.

"Respondents failed to consider that owing to the peculiar circumstances of this year, the center change option was also given in INI CET examination, which was postponed after the direction was issued by this Hon'ble Court in the matter of Poulami Mondal &Ors. Vs. All India Institute of Medical Science &Ors. [W.P. (C) 628 of 2021]," plea also states.