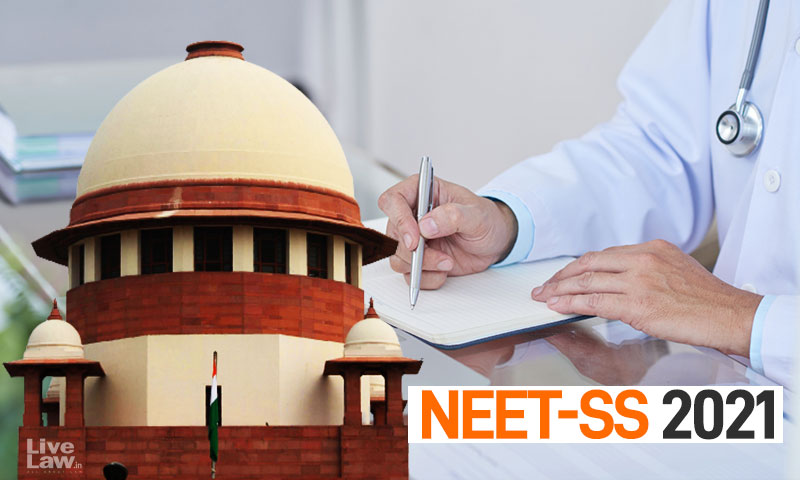 The Supreme Court on Monday refused to interfere in a petition seeking lowering of cut off percentile for admission in NEET Super Speciality courses.

Observing that if a considered decision is taken to not lower the percentile it cannot be faltered, the bench of Justices DY Chandrachud and Surya Kant in their order said,

"Sufficiently candidates were available for undertaking the counseling of vacant seats and the decision not to reduce the percentile is based on not compromising the merit. Doctors have to deal with life and merit cannot be disregarded. Question is to whether the percentile should be reduced further is a matter of academic policy. Reasons by the Ministry cannot be regarded as extraneous and arbitrary. In the circumstances it is not possible for this court to entertain the request for directing reduction in the percentile. If considered decision is taken to not lower standards to lower the percentile such a decision cannot be faltered."

Appearing for the petitioners, Senior Advocate PS Patwalia submitted that about 940 seats were vacant for the academic year 2021-22. Seeking to lower the cut off, Senior Counsel had submitted that it would be a national waste of resources if the seats are not filled up.

To further substantiate his contention, Senior Counsel submitted that in the previous Academic Year the cut off percentile which was initially fixed at 50 was reduced to 30 for 2019-20 and 45 for 2020-21. Apprising the bench with regards to the reduction in cut off in respect of other PG Medical courses, he submitted that there was no reason why distinction should be made for SS Courses. Reliance was also placed by the Counsel on the Top Court's judgment in Harshit Aggarwal v Union of India which noted that the Central Government had earlier lowered the qualifying cut off by 10.00 percentile for the admission of BDS Course for the academic year 2019-2020.

Appearing for the Union Ministry of Health and Family Welfare, Additional Solicitor General Aishwarya Bhati submitted that during the academic year 2019-2020, the percentile of 50 which was fixed for eligibility was reduced to 30 as result of which vacant seats came down by 272 from 809. She further submitted that for 2020-21, the percentile was reduced for 50-45 as result of which vacant seats were reduced by 91 from the original 916 seats.

It was also her contention that for the current academic year, the percentile has been maintained for 50 resulting in a total of 940 seats and that major part of seats which have remained vacant were in subjects where seats do remain vacant as a matter of contemporary experience. She further submitted that a meeting was convened on 4th May 2022 comprising of other stakeholders and after considering the issue it was decided to not lower since lowering the percentile would lead to compromising of the standard.

It may be noted that the Top Court on May 2, 2022 had also refused to interfere with the Miscellaneous Application seeking further reduction of 5 percentile for NEET PG 2021.

The bench of Justices DY Chandrachud and Surya Kant in their order said,

"This court would not be inclined to interfere unless there is any manifest arbitrariness. The Union Government took the decision after due consideration of reducing the percentile of 15. Reduction of 5 percentile would be trenching upon the academic/ policy domain. Hence we find no merit. MA is disposed of."