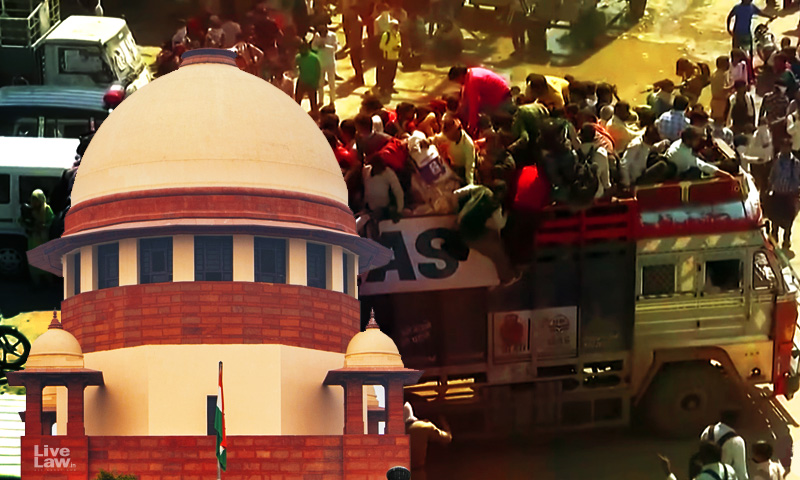 The National Human Rights Commission (NHRC) has filed an application seeking to intervene in the case of Suo Motu cognizance taken by the Supreme Court with regard to the condition of migrant workers stranded in different parts of the country amid the COVID-19 induced lockdown. Through its application, NHRC purports to examine the laws governing the protection of human rights of...

The National Human Rights Commission (NHRC) has filed an application seeking to intervene in the case of Suo Motu cognizance taken by the Supreme Court with regard to the condition of migrant workers stranded in different parts of the country amid the COVID-19 induced lockdown.

Through its application, NHRC purports to examine the laws governing the protection of human rights of migrants and suggest measures to ensure the same are not compromised, as per its prescribed statutory functions. Since the Commission was established to protect and promote human rights under the Protection of Human Rights Act, 1993, it is stated that the application is in furtherance of its prescribed functions under the Act.

Its functions, states NHRC, are "to intervene in any proceedings involving any allegation of violation of human rights pending before a court", and "to review the safeguards provided by or under the Constitution or any law for the time being in force for the protection of human rights and recommend measures for effective implementation".

The Commission has informed Court that, based on certain reports, it has taken suo motu cognizance of migrants in 6 different cases and has issued notice to various Governments and Departments, asking them for details on what action they have taken to provide food, water and other basic amenities to those who are seen to be struggling.

NHRC details these 6 instances where it felt the need to step in due to apparent human rights violations, and issued notice to the following authorities, in each separate case respectively:-

NHRC further points out that the Inter-State Migrant Workmen (Regulation of Employment and Conditions of Service) Act, 1979 is an important legislation to govern inter-state migrant workers, which was aimed at providing inter-state workmen with conducive work conditions and preventing exploitation.

Despite the legislation granting migrant workers entitlement to wages similar to other workmen, displacement allowance, journey allowance and payment of wages during the period of journey, NHRC contends that their plight in recent times has shown that the Act was never implemented in its true spirit.

In this light, NHRC has come up with a list of 10 short-term and 10 long-term measures to help reduce the hardships and grievance of poor labourers. The Top Court has been asked to consider these suggestions in order to not only alleviate the current plight of migrant workers, but to also ensure that such distress is not caused in the future.

The suggestions enclosed in the application filed through Advocate Mohit Paul are as follows:-

As the matter was taken up today before a Bench comprising of Justices Ashok Bhushan, SK Kaul and MR Shah, Senior Advocate Prabhu Patil expressed the NHRC's desire to intervene in the matter.

Patil apprised the Court of this application and stated that the aforementioned measures had been suggested by the Commission.

As the counsel urged the top Court to consider implementing these measures, Solicitor General Tushar Mehta stated that the same could wait, as they were long term solutions and the Court was currently concerned with the present situation.

Patil submitted that the NHRC was not being adversarial and willing to help, while the Solicitor clarified that he was not opposed to the Commission's intervention.

The Bench reserved its Order on the Suo Motu matter and will deliver the same on Tuesday, June 9.