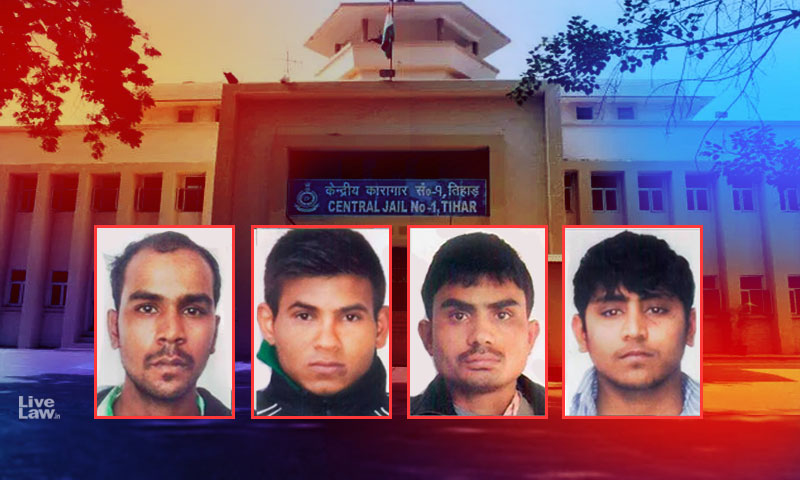 The execution of four convicts in the 2012 Delhi gangrape and murder case - Mukesh Singh(32), Akshay Kumar Singh(31) , Vinay Sharma(26) and Pawan Kumar Gupta(25) - was carried out at Tihar Jail, Delhi on Friday morning at 5. 30 AM.Though the convicts made late night attempts to stall the execution by filing a revision petition in the Delhi HC and also a writ petition in the Supreme Court,...

Though the convicts made late night attempts to stall the execution by filing a revision petition in the Delhi HC and also a writ petition in the Supreme Court, the same were dismissed by the Courts.

A Delhi High Court division bench comprising Justices Manmohan and Sanjeev Narula rejected the petition at around 12 AM after a special late night hearing at the residence of Justice Manmohan. The petition had sought stay of execution, inter alia, on the ground that second mercy petition of Akshay was pending.

After that, a writ petition was filed in the Supreme Court, challenging the rejection of mercy plea of Pawan Gupta. Following a hearing which commenced at around 2.45 AM, a bench comprising Justices R Banumathi, Ashok Bhushan and A S Bopanna dismissed the petition around 3. 45 AM.

The execution was earlier deferred on three occasions.

It was on January 7 that the Trial Court issued death warrants in the case for the first time, for execution on January 22.

On January 17, the date was postponed, noting that convict Mukesh's mercy plea was rejected only on that day. The new date was fixed as February 1, to provide the mandatory 14 days notice for the convict after the rejection of death penalty.

On the eve of the new date, January 31, the Trial Court stayed the execution until further orders, taking note of the fact that the other three convicts have not exhausted all their legal remedies. ASJ Dharmender Rana of Patiala House Court refused to accept the plea of the State for separate hanging of Mukesh by reasoning that all convicts sentenced by a common order should be executed together.

Next, on February 17, the trial court issued black warrant for execution on March 3.

On March 2, a day before the scheduled hanging, the date was deferred taking into account the mercy petition submitted by Pawan Gupta.

After the rejection of Pawan's mercy petition, the trial court issued fresh death warrant on March 5 for execution on March 20.

The Patiala House Court postponed the hearing on the death warrant till January 7, 2020.

Jan 31 -The Supreme court dismissed the review petition filed by Pawan Kumar Gupta, one of the four death-row convicts in the 2012 Delhi gangrape.

The Delhi court stayed hanging of four convicts in Nirbhaya until further orders. Additional Sessions Judge Dharmender Rana at Patiala House Court passed the order in the applications filed by the convicts to stay the execution of their death penalties scheduled on Feb 1 at 6am.

Feb 12 - Additional Sessions Judge Dharmendar Rana of Patiala House adjourned the hearing of Tihar jail's plea seeking fresh death warrant against the four convicts. The adjournment was granted in order to ensure legal aid for Pawan Gupta, one of the convicts. The Court noted that a death row convict has a right to audi alteram partem till his last breath.

The Court observed in the order that "any condemned convict must not meet his Creator with a grievance in his bosom that the courts of this Country have not acted fairly in granting him an opportunity to exhaust his legal remedies".

● March 5 - The Delhi Court issued fresh death warrant in the Nirbhaya gang rape and murder case for the execution of death sentences by hanging by the neck of four convicts on March 20 at 6 AM.

● March 17 - One of the convicts Mukesh sought to declare the trial as vitiated alleging concealment of material documents and facts. Moving an application before Additional Sessions Judge Shri Dharmendra Rana, Mukesh had contended that the State concealed vital documents in the trial court and secured the final order to execute the death sentence.

The Delhi Court rejected the plea moved by Mukesh. The Additional Sessions Judge Dharmender Rana while dismissing the matter, referred the matter to the Bar Council of India to take note of the conduct of the lawyer.

● March 18 - Delhi High Court dismisses plea moved by one of the convicts Mukesh seeking the trial court order dated 10/09/2013, wherein he was convicted for the rape and murder of Nirbhaya, to be declared as invalid on the ground of concealment of vital documents.

12 AM : Delhi HC dismisses convicts' plea for stay on execution.