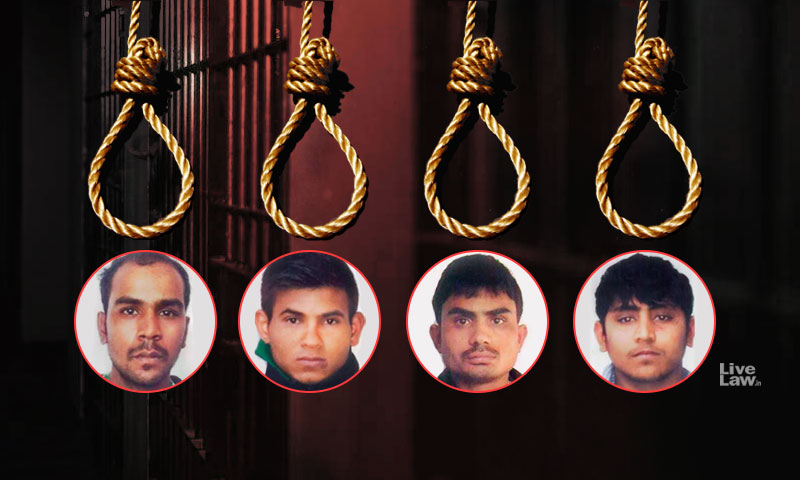 Observing that the four convicts in the Nirbhaya case cannot be executed separately, the Delhi High Court on Wednesday directed them to exhaust their remaining legal remedies within 7 days from today. After that period, the authorities should act as per law, ordered the Court.Though the Court did not agree with the interpretation of the Trial Court that pendency of mercy petition of even...

Observing that the four convicts in the Nirbhaya case cannot be executed separately, the Delhi High Court on Wednesday directed them to exhaust their remaining legal remedies within 7 days from today. After that period, the authorities should act as per law, ordered the Court.

Though the Court did not agree with the interpretation of the Trial Court that pendency of mercy petition of even one convict is ground to postpone the executions, it did not set aside the order.

Since their fate has been decided by the same order up to the Supreme Court, they must be executed together, the Court said. As per the law laid down by the Supreme Court in Shamsher Singh v. State of UP, convicts against whom a common sentence order is passed cannot be executed separately, noted the HC.

The Court was passing orders on the the revision petitions filed by Union Ministry of Home Affairs against the January 31 order of the Trial Court which stayed the executions of four convicts in the 2012 Delhi gangrape and murder case until further orders.

The High Court held that Rules 834 and 836 in Delhi Prison Rules, which speak of postponement of execution in the event of pendency of legal proceedings by co-convicts, talk only about appeals and not mercy petitions.

"I do not agree with the opinion of the trial court that the word 'application' in Prison Rules is a generic term which shall also include mercy petition. Therefore, the court believes that the words 'application' and 'appeal' in Rule 836 of the Delhi Prison Rules does not include mercy petition.", Justice Suresh Kumar Kait of High Court observed.

"It is also relevant to consider whether delay in execution of death sentence is attributable to the delay tactics of the convicts. I have no hesitation to say that all the convicts waited, for reasons best known to them, to file their review petitions after more than 150 days. Akshay filed his review after delay of more than 900 days", added the judge

"Convicts have adopted delayed tactics. So I hereby direct all convicts to exercise their legal remedies within 7 days, after which the court expects the authorities to act as per the law", the operative portion of the order dictated in open court stated.

Justice Suresh Kumar Kait had reserved orders on the petitions after a special hearing held on Sunday afternoon.

Additional Sessions Judge Dharmender Rana of Patiala House Courts had stayed the hangings, which were scheduled on February 1, citing the reason that all the convicts had not exhausted their legal remedies.

During the proceedings in HC, it was argued by Solicitor General Tushar Mehta that the Trial Court erroneously interpreted Rule 836 of Delhi Prison Rules, to hold that pendency of mercy petition of even one of the convicts would automatically stay the execution of the death sentence all the other co convicts.

Since the convicts were charged for having common intention to hatch a criminal conspiracy the punishment against them can be executed only together, John submitted.

Out of the four convicts, Mukesh Singh has exhausted all his legal remedies, including mercy petition and also the challenge against the rejection of mercy.

The President had rejected the mercy plea of convict Vinay Sharma on Saturday.

Another convict Akshay Kumar Thakur filed mercy petition on Saturday. The fourth convict Pawan Gupta has not yet filed curative petition in SC and mercy plea before the President.