The National Law Aptitude Test (NLAT) 2020 for admissions to UG/PG law courses at the premier National Law School of India University (NLSIU), Bangalore was held yesterday. Whereas NLSIU has claimed that its technological and proctoring processes have performed "to scale", many students complained of login-related issues, verification issues, technical glitches, untimely submission...

Whereas NLSIU has claimed that its technological and proctoring processes have performed "to scale", many students complained of login-related issues, verification issues, technical glitches, untimely submission of answers, etc.

NLSIU has announced that students who faced technical difficulties during the exam may login to the admission portal and raise a query, latest by 12pm on September 13.

There are complaints of rampant cheating during the exam which the AI-based human proctoring failed to detect. Photos of NLAT questions were allegedly circulated all over social media and some candidates claimed to have discussed the entire question paper with their friends, over messages during the exam. Some miscreants even run the entire test live via Zoom screen share. 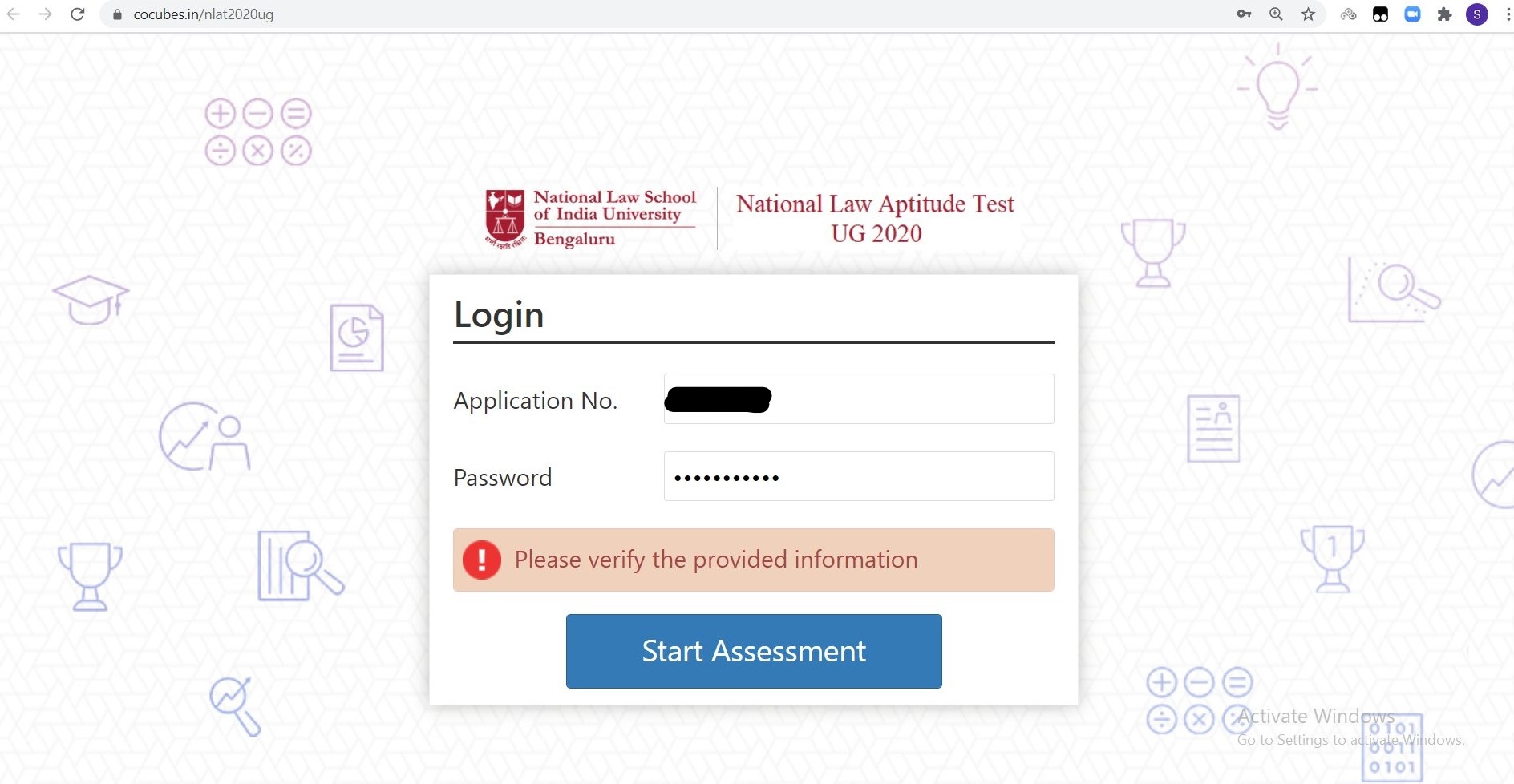 The examination for PG Course commenced at 6 PM. Terming it a "collective failure", a law student from AMU disclosed that he constantly faced technical glitches during the exam. Further, there were multiple web-cam alert signals, that disturbed the candidates.

A student from Campus Law Center, Delhi wrote on Twitter that he could not even see the question paper properly. "My test paper started at 06:46 p.m. and got automatically submitted at 06:50 p.m." he wrote to the University.

So far as the UG exam is concerned, it was held in three sessions. The first session of the exam commenced at 12.30 pm; the second session began at 2.15 pm and the third session started at 4.00 pm.

A candidate, who was allotted the first slot, told LiveLaw that she was unable to appear for the examination as she could not proceed beyond the "Document Verification" page. She also claimed that the Help Desk set up by the University could not resolve her problem, despite numerous calls.

"I had filled up the NLSIU (UG) Admission form to appear for NLAT 2020. I was allotted the 12:30pm time-slot. I've been sitting in front of my system since 11:55am and haven't yet been able to login. For some reason the test process is not moving beyond the "document verification" page. I've called the help-desk number at least 15 times. Now, I've been instructed to contact the authorities from NLSIU as the person who has been listed as the point of contact is unable to help me," she told.

"NLAT 2020 has been an absolute disaster. I had my time at 12:00 and i waited till 12:30 after I uploaded my photo of me and the ID card. Didn't get verified till now and I have given up hope. When I called the technical assistance no., they told me to call the University," another student said.

These statements were given three hours after the exam-start time and till then, the students had not received any satisfactory response from the authorities.

Another student wrote to LiveLaw, informing that he got only 18 minutes time to write the examination, as he faced login issues. It may be noted that the exam duration stipulated by the University is of 45 minutes.

"My slot was 12:30. I logged in by 12 and since then i was only shown the message of 'waiting for verification'. I also contacted the authorities but nothing happened. My test started around 1:40 and in about 18 minutes the test got submitted automatically. I couldn't even complete the test," he told.

Some students were unable to login because despite entering the login credentials provided by the University, the exam portal prompted that there were credentials were not verified.

"My NLAT exam slot was 12:30-1:15. I couldn't login into my exam. I had tried many times with the Application No. and Password which I had got on my mail. But still was not able to login. I have mailed the issue but got no response," a student wrote miserably as she was unable to appear for the exam.

Some students also complained that the NLAT server crashed numerous times during the exam, rendering it impossible to attempt any questions. Further, there was no spport forthcoming from the University's end.

For the second slot of UG exam, NLSIU informed that nearly 95% candidates had successfully logged in.

However, students faced issues even after logging into the portal. Many complained that the exam was submitted automatically, much before the exam time concluded.

Narrating his 'disturbing experience' of the NLAT 2020 a student wrote to LiveLaw thus:

"The test began at 2:30 p.m. after I used a photo of my Aadhaar shot with my webcam as ID proof. Throughout the test, there were incessant prompts from the system to keep my face in the "camera zone". It was as though these folks don't understand that to do calculations on paper for a math question, you need to look at it! However, the disturbing prompts were not the biggest problem.

At the 39th minute mark, in a 45 minute test, my paper was automatically submitted!! I had not clicked or hit any key to submit my paper. I was busy working out the questions. I was literally robbed of 6 full minutes of precious test time! I panicked and immediately wrote to the NLSIU email, asking for guidance and help. I don't think I'll be getting a response."

He also pointed out that the exam portal accepted his verification ID after numerous attempts, which made him panic even before the exam started.

"Sir my exam was submitted due to system error from your side and then I have to restart my PC and my test was automatically submitted without even answering a single question. I had not even read the first question ... My exam was in 2nd slot of 2:15," another student wrote on Twitter.

Similar problems were faced by students during the third session. A student reported that due to technical problems, she was able to login for NLAT only at 4:24 pm (whereas the exam commenced at 4pm). Further, her answers got submitted automatically at 4:57 pm, thus giving her only 30 minutes time to write the exam.

Another student told that he was stuck on the verification page till 4.45 pm and thus, could not appear for the exam.

"Today, I was given the 4-4:45 slot for the NLAT entrance for NLSIU, Bangalore UG admissions. I had uploaded my documents by 3:30. My internet connection worked at 100 mbps and was waiting for the verification to happen in time. I waited till 4 and called the tech support. Half of their contact numbers couldn't be reached and the one who picked, told me to wait…

My paper started at 4:17. Even while writing the exam I was constantly disturbed by their pop- ups and even got multiple calls regarding technical issues which didn't arise once, during their mock assessment. As I was on my last passage, I was still left with six minutes but my paper got automatically submitted.

I called my invigilator who told me that it was submitted by me, which wasn't the case. He later called me and informed that all papers got submitted at 4:56 itself and blamed the technical support for my problems," a student who contacted LiveLaw said.

NLAT 2020 is a "home-based" online examination that uses a combination of AI-based and human proctoring.

The decision of the premier law institute to conduct a separate admission test after backing out of CLAT has been challenged in the Supreme Court. On September 11, the Supreme Court said that it will examine the legality of the decision, and restrained NLSIU from publishing the results of NLAT and conducting admissions on its basis, while allowing it to hold the test on September 12. The matter will be considered again by the Court on September 16.