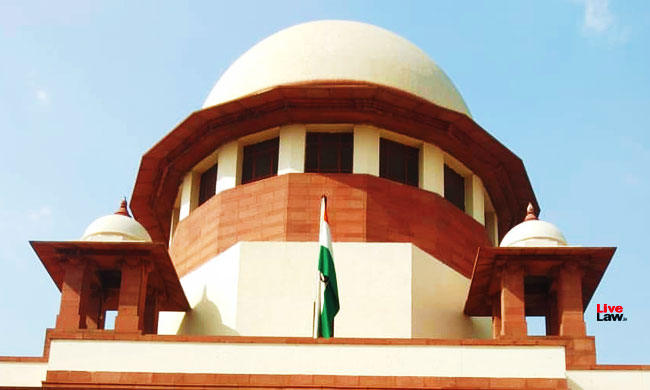 x
"Goa is a shining example of an Indian State which has a uniform civil code applicable to all, regardless of religion except while protecting certain limited rights."

The Supreme Court, in a judgment delivered on Friday, observed that no attempt has been made yet to frame a Uniform Civil Code applicable to all citizens of the country despite exhortations by it.Justice Deepak Gupta, speaking for the bench, also remarked that Goa is a shining example of an Indian State which has a uniform civil code applicable to all, regardless of religion except...

The Supreme Court, in a judgment delivered on Friday, observed that no attempt has been made yet to frame a Uniform Civil Code applicable to all citizens of the country despite exhortations by it.

Justice Deepak Gupta, speaking for the bench, also remarked that Goa is a shining example of an Indian State which has a uniform civil code applicable to all, regardless of religion except while protecting certain limited rights.

The bench, also comprising of Justice Aniruddha Bose made these observations in Jose Paulo Coutinho vs. Maria Luiza Valentina Pereira while holding that it will be the Portuguese Civil Code, 1867 as applicable in the State of Goa, which shall govern the rights of succession and inheritance even in respect of properties of a Goan domicile situated outside Goa, anywhere in India.

No Attempt To Frame A Uniform Civil Code

In the judgment, Justice Gupta said:

It is interesting to note that whereas the founders of the Constitution in Article 44 in Part IV dealing with the Directive Principles of State Policy had hoped and expected that the State shall endeavour to secure for the citizens a Uniform Civil Code throughout the territories of India, till date no action has been taken in this regard. Though Hindu laws were codified in the year 1956, there has been no attempt to frame a Uniform Civil Code applicable to all citizens of the country despite exhortations of this Court in the case of Mohd. Ahmed Khan vs. Shah Bano and Sarla Mudgal & Ors. vs. Union of India & Ors.

Goa is a Shining Example

However, Goa is a shining example of an Indian State which has a uniform civil code applicable to all, regardless of religion except while protecting certain limited rights. It would also not be out of place to mention that with effect from 22.12.2016 certain portions of the Portuguese Civil Code have been repealed and replaced by the Goa Succession, Special Notaries and Inventory Proceedings Act, 2012 which, by and large, is in line with the Portuguese Civil Code. The salient features with regard to family properties are that a married couple jointly holds the ownership of all the assets owned before marriage or acquired after marriage by each spouse. Therefore, in case of divorce, each spouse is entitled to half share of the assets. The law, however, permits pre¬nuptial agreements which may have a different system of division of assets. Another important aspect, as pointed out earlier, is that at least half of the property has to pass to the legal heirs as legitime. This, in some ways, is akin to the concept of 'coparcenary' in Hindu law. However, as far as Goa is concerned, this legitime will also apply to the self-acquired properties. Muslim men whose marriages are registered in Goa cannot practice polygamy. Further, even for followers of Islam there is no provision for verbal divorce.

The then Chief Justice of India YV Chandrachud, speaking for the Constitution bench which delivered the landmark judgment had made these observations:

It is also a matter of regret that Article 44 of our Constitution has remained a dead letter. It provides that "The State shall endeavour to secure for the citizens a uniform civil code throughout the territory of India". There is no evidence of any official activity for framing a common civil code for the country.A belief seems to have gained ground that it is for the Muslim community to take a lead in the matter of reforms of their personal law.A common Civil Code will help the cause of national integration by removing disparate loyalties to laws which have conflicting ideologies. No community is likely to bell the cat by making gratuitous concessions on this issue. It is the State which is charged with the duty of securing a uniform civil code for the citizens of the country and, unquestionably, it has the legislative competence to do so.A counsel in the case whispered, somewhat audibly, that legislative competence is one thing, the political courage to use that competence is quite another. We understand the difficulties involved in bringing persons of different faiths and persuasions on a common platform But, a beginning has to be made if the Constitution is to have any meaning. Inevitably, the role of the reformer has to be assumed by the courts because, it is beyond the endurance of sensitive minds to allow injustice to be suffered when it is so palpable. But piecemeal attempts of courts to bridge the gap between personal Laws cannot take the place of a common Civil Code. Justice to all is a far more satisfactory way of dispensing justice than justice from case to case.

This judgment authored by Justice Kuldip Singh began with this note:

"The State shall endeavour to secure for the citizens a uniform civil code through-out the territory of India" is an unequivocal mandate under Article 44 of the Constitution of India which seeks to introduce a uniform personal law - a decisive step towards national consolidation. Pandit Jawahar Lal Nehru, while defending the introduction of the Hindu Code Bill instead of a uniform civil code, in the Parliament in 1954, said "I do not think that at the present moment the time is ripe in India for me to try to push it through". It appears that even 41 years thereafter, the Rulers of the day are not in a mood to retrieve Article 44 from the cold storage where it is lying since 1949. The Governments - which have come and gone - have so far failed to make any effort towards "unified personal law for all Indians". The reasons are too obvious to be stated. The utmost that has been done is to codify the Hindu law in the form of the Hindu Marriage Act, 1955. The Hindu Succession Act, 1956, the Hindu Minority and Guardianship Act, 1956 and the Hindu Adoptions and Maintenance Act, 1956 which have replaced the traditional Hindu law based on different schools of thought and scriptural laws into one unified code. When more than 80% of the citizens have already been brought under the codified personal law there is no justification whatsoever to keep in abeyance, any more, the introduction of "uniform civil code" for all citizens in the territory of India.

John Vallamattom vs Union Of India (2003)

In this judgment, the then Chief Justice of India VN Khare had observed:

Before I part with the case, I would like to state that Article 44 provides that the State shall endeavour to secure for the citizens a uniform civil code throughout the territory of India. The aforesaid provision is based on the premise that there is no necessary connection between religious and personal law in a civilized society. Article 25 of the Constitution confers freedom of conscience and free profession, practice and propagation of religion. The aforesaid two provisions viz. Articles 25 and 44 show that the former guarantees religious freedom whereas the latter divests religion from social relations and personal law. It is no matter of doubt that marriage, succession and the like matters of a secular character cannot be brought within the guarantee enshrined under Articles 25 and 26 of the Constitution. Any legislation which brings succession and the like matters of secular character within the ambit of Articles 25 and 26 is a suspect legislation. Although it is doubtful whether the American doctrine of suspect legislation is followed in this country....

...It is a matter of regret that Article 44 of the Constitution has not been given effect to. Parliament is still to step in for framing a common civil code in the country. A common civil code will help the cause of national integration by removing the contradictions based on ideologies. For the reasons aforementioned, this writ petition is allowed and Section 118 of the Indian Succession Act is declared unconstitutional being violative of Article 14 of the Constitution of India.

Law Commission of India's view: Formulation of a UCC is neither necessary nor desirable at this stage.

In its consultation paper on 'Reform of Family Law' , the Law Commission had highlighted the importance of recognition of difference that exists in the Indian society and opined that formulation of a Uniform Civil Code is neither necessary nor desirable at this stage.

While diversity of Indian culture can and should be celebrated, specific groups, or weaker sections of the society must not be dis-privileged in the process. Resolution of this conflict does not mean abolition of difference. This Commission has therefore dealt with laws that are discriminatory rather than providing a uniform civil code which is neither necessary nor desirable at this stage. Most countries are now moving towards recognition of difference, and the mere existence of difference does not imply discrimination, but is indicative of a robust democracy.