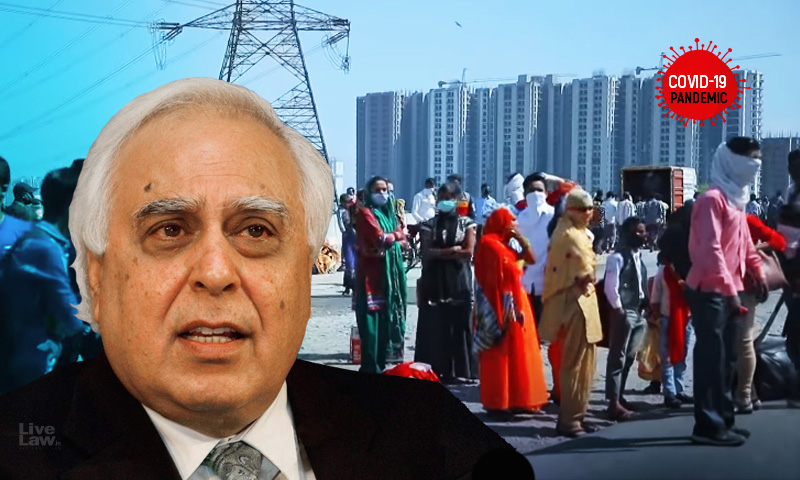 After an intense exchange of arguments that ensued in the Supreme Court today, on the issue of country-wide plight surroundings Migrant Workers amid lockdown, Top Court passed a number of notable directions to allay their miseries.Solicitor General Tushar Mehta appeared for the Centre while Senior Advocates Kapil Sibal, Colin Gonsalves, Indira Jaising appeared for the Intervenors in the Suo...

After an intense exchange of arguments that ensued in the Supreme Court today, on the issue of country-wide plight surroundings Migrant Workers amid lockdown, Top Court passed a number of notable directions to allay their miseries.

Senior Advocate Sanjay Parikh appeared for Activist Medha Patekar, who had filed a plea seeking formulation of a "unified-ticketing-system" for migrant workers traveling via trains as well as schemes for providing them with financial support during and post lockdown.

Senior Advocate Kapil Sibal appeared for Delhi Shramik Sangathan & another NGO. Before he started apprising the court, Sibal added that "he was not here for any political purpose" but appeared on behalf of interested organisations, wanting to point to relevant statutory provisions under the Disaster Management Act, 2005.

He argued that there were certain legalities that must be looked into in light of the crisis surrounding migrant workers looming large.

Sibal: "Under the DMA, whenever there is a disaster, a national plan should be prepared by the NEC which is then approved by the DM authority presided over by the Prime minister. Minimum standards include shelter, food, drinking water, medical cover and sanitation"

The formulation of a national plan by the NEC is elucidated in Section 11 of the DMA, 2005, to be made "in consultation with the State Governments and expert bodies of organisations in the field of disaster management to be approved by the National Authority"

Further, highlighting the pre-requisite of invoking Section 12 of the DMA, 2005 during disasters, Sibal stated that the Section required adoption of minimum standards of basic amenities to the effected public.

"Guidelines for minimum standards of relief.—The National Authority shall recommend guidelines for the minimum standards of relief to be provided to persons affected by disaster, which shall include,—
(i) the minimum requirements to be provided in the relief camps in relation to shelter, food, drinking water, medical cover and sanitation;
(ii) the special provisions to be made for widows and orphans;
(iii) ex gratia assistance on account of loss of life as also assistance on account of damage to houses and for restoration of means of livelihood;
(iv) such other relief as may be necessary"

"This has guidelines which spell out minimum standards. It has not been done." Sibal argued.

With this, he sought to rebut the stand of  Centre according to which the Migrants were walking due to "local instigation" basis the legalities envisaged under the DMA.

Sibal:"This is the reason [non-implementation of minimum standards and lack of coordination] why people are walking. It has nothing to do with politics. People are walking away from shelters because the shelter homes are not upto standard."

Further, Sibal emphasized that the Centre's affidavit was vague and inadequate at the state and district levels.

Sibal: "If it's going to take 3 months to transport rest of the people, what are the arrangements? Trains running on 3% capacity. In the current situation, it will take 3 months for people to go"

At this juncture, Solicitor General Tushar Mehta interjected, stating that all migrants were in fact not wishing to head back to their native places.

SG - They don't wish to go. You don't understand that ?

Sibal: How can you say that?

SG: I said they were leaving on foot because of local instigation!

The Court recorded Sibal's submissions in the order as follows :