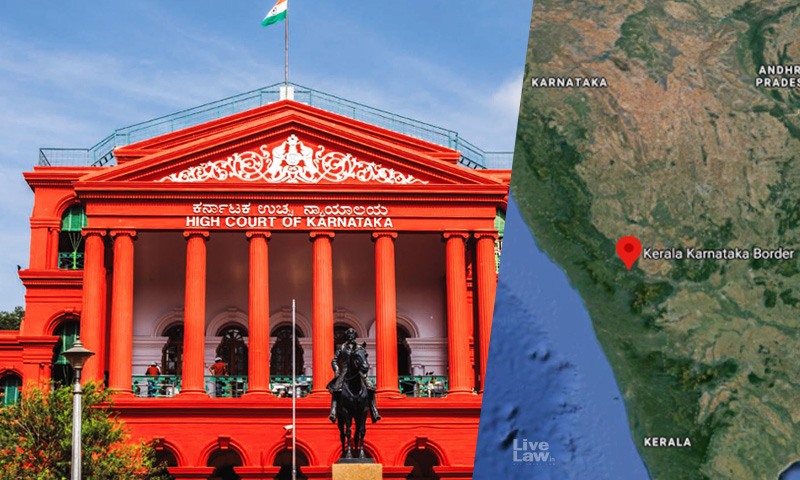 The Karnataka High Court on Thursday accepted the assurance given by the State Government that there will be no restriction on movement of public/goods between Kerala and Karnataka and all the entry-exit points between the two states, will remain open.

The assurance was made by the state government while hearing a petition filed by Advocate B Subbaya Rai, who challenged the border restrictions imposed by order of Deputy Commissioner of Dakshina Kannada, issued on February 18 and March 15, in the wake of rising COVID-19 cases.

The High Court had earlier criticized the government's order observing that it was against the 'unlock' directives of the Central Government which prohibited restrictions on inter-state travel.

"There is a concept of Federalism, you cannot simply close borders", the bench had told the Government's counsel.

"We are of the view that not only in view of Clause 19 of directions issued by Chairman of National Executive Committee, which is in operation at least from Jan 27, 2021, we see no authority vesting with the Deputy Commissioner who is also the Chairman of the District Disaster Management Authority, to close the border of the district for vehicular and other traffic. He had no power to confer authority on local authorities to close the borders, these are the directions which violate the fundamental rights of citizens."

Earlier, the state had informed the court that that clause 3 of the proceedings of the revised order issued by the Deputy Commissioner, which authorized local authorities to close check posts at Kerala border, will not be acted upon.

The bench disposed off the matter by saying "In view of the assurance of the state government recorded in the order dated March 30 and assurance given today, no further directions are required to be issued at this stage. In view of assurance recorded above, we dispose of the petition".

On a previous hearing the court had taken exception to the directives, purportedly issued to control the surge of COVID-19 cases: "The modified order passed by the Deputy Commissioner of Dakshina Kannada on March 15, is misconceived and issued in complete non-application of mind. This gives arbitrary power to local authorities to close any check post and open any check post anywhere. This authorizes them to close the check post. It is worse then the earlier order, at least earlier there was clarity on which check posts were open", CJ Oka had orally remarked.
The Deputy Commissioner passed the modified order after the Court rapped the State Government for imposing travel restrictions in violation of the Central Government's 'unlock' guidelines which prohibit curbs on inter-state travel.
Terming the modified order "worse than the previous order", the bench had said on the previous hearing :
"Look at the consequences, at least in the original order four checkpoints were open. By virtue of clause 3, at the 11th hour someone will be told the route is closed, because for the last three days no person has used it so we closed it, so the person will have to take a different route. Will it not directly affect those people who are entering Kerala from Karnataka and coming back?".
The Court also commented that the border restrictions did not make any sense as there was no curbs on air travel from the neighbouring state.
"Flights from Kerala operate to Karnataka without restrictions. So, if you have money you can enter the state of Karnataka without restrictions but if you can't afford to buy an air ticket you will be subjected to all these restrictions. How this can be tolerated?", the bench had asked the government's counsel.
Last year, the Kerala High Court had interfered with the blockade imposed by Karnataka Government on the Kerala border. Acting on a PIL filed by the Kerala High Court Advocates Association, the Kerala High Court directed the Union Government to open the highway for travel. The High Court noted that the travel restrictions had infringed the right to health of border residents, who were relying on hospitals in Mangalore for treatment. When Karnataka appealed to the Supreme Court, the SC suggested a dialogue between the Chief Secretaries of both the states. Following talks, the restrictions were lifted.