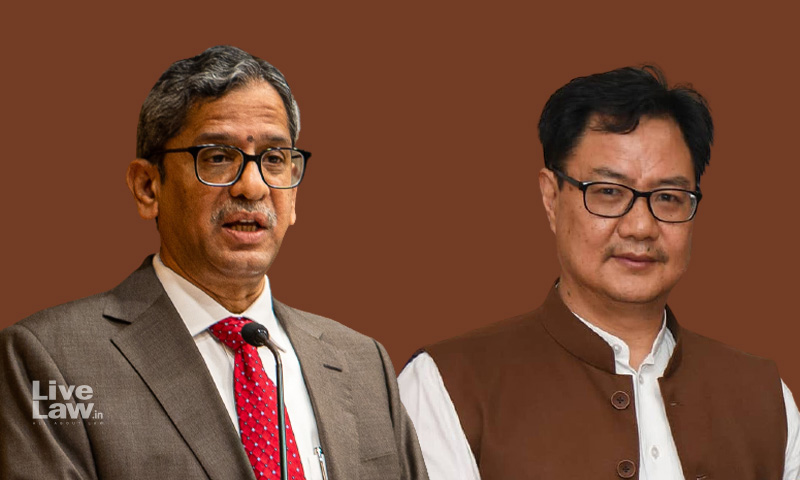 Responding to the concerns expressed by Union Minister for Law and Justice Kiren Rijiju regarding the huge case backlogs in the country, Chief Justice of India NV Ramana on Saturday reiterated that the non-filling up of judicial vacancies was the major reason for the pendency of cases in the country.

The Law Minister and the Chief Justice were attending the All India Legal Services Authorities Meet at Jaipur.

In his address, the Law Minister said that it was a matter of concern that over 5 crore cases are pending in courts across the country in the 75th year of independence. The Minister called for a coordinated efforts by both the judiciary and the executive in reducing pendency.

"The pendency of cases in our country is touching 5 crores. What'll be the situation after 25 years? People ask me about as the Law Minister. Yesterday I talked to officials in my department to bring the number down by 2 crores in 2 years", the Minister said.

"In our amritkal, we should have a justice system that is speedy and accessible", he added.

CJI Ramana, after completing his address, said that it is his responsibility to respond to the comments of Law Minister regarding pendency.

"It is my responsibility to react to one or two things which the Law Minister has mentioned. I am glad that he has taken up the issue of pendency. We judges also, when we go outside the country, we also face the same question : how many years will a case take place? You all know the reasons for pendency. I need not elaborate on it. I already indicated this in the last Chief Justices-Chief Ministers conference. You all the know the major important reason is the non-filling up of the judicial vacancies and not improving the judicial infrastructure", CJI said.

"Judiciary is always ahead in trying to resolve all these issues. Only I request is that, the Government has to take up the filling up of vacancies, as well as providing infrastructure. And NALSA is the best model. It is a success story. So on the same lines, we suggested a Judicial Infrastructure Authority in the last Chief Justices' conference. Unfortunately, it was not taken up. However, I hope and trust that the issue will be revisited", CJI Ramana said.

The CJI has voiced the same concern on earlier occasions too. Speaking at the Joint Conference of the Chief Ministers of the States and Chief Justices of the High Courts at New Delhi on April 30, the CJI said the non-performance of the various wings of the executive and the ambiguities in the legislations were contributing a lot to the case load of the judiciary.

If the authorities are performing their functions in accordance with law, people would not approach the Courts, the CJI had said at that event with the Prime Minister on stage.

The CJI had said that the pendency is blamed on the judiciary but the issue of unfilled vacancies and increasing sanctioned strength of judges need discussion.

"As per sanctioned strength, we have just around 20 judges per 10 lakh population, which is alarming low", the CJI pointed out.

"I would like to urge the Hon'ble Chief Ministers to extend wholehearted co-operation to the Chief Justices, in their endeavor to strengthen the district judiciary...Unless the foundation is strong, the structure cannot be sustained. Please be generous in creating more posts and filling the same, so that our judge-to-population ratio is comparable to advanced democracies", the CJI had said.