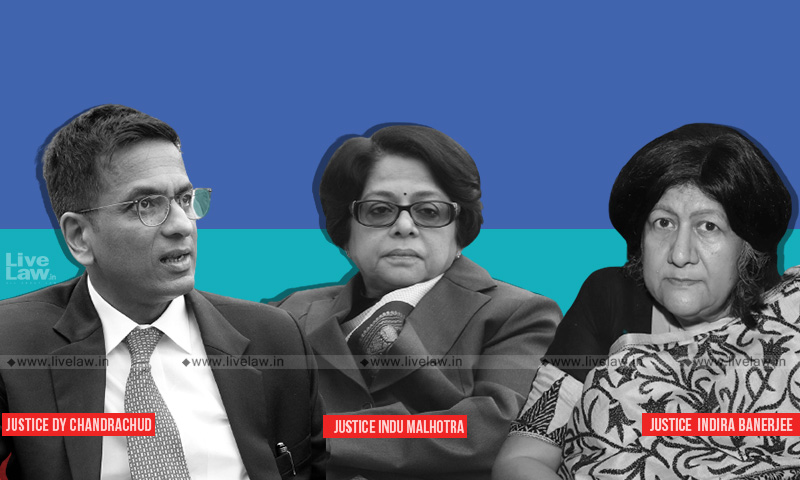 A three judge bench of the Supreme Court has observed that non-payment of stamp duty on the commercial contract will not invalidate the arbitration agreement.Disagreeing with two earlier judgments in this regard, the bench comprising Justices DY Chandrachud, Indu Malhotra and Indira Banerjee referred the following question to the Constitution Bench."Whether the statutory bar...

A three judge bench of the Supreme Court has observed that non-payment of stamp duty on the commercial contract will not invalidate the arbitration agreement.

Disagreeing with two earlier judgments in this regard, the bench comprising Justices DY Chandrachud, Indu Malhotra and  Indira Banerjee referred the following question to the Constitution Bench.

"Whether the statutory bar contained in Section 35 of the Indian Stamp Act, 1899 applicable to instruments chargeable to Stamp Duty under Section 3 read with the Schedule to the Act, would also render the arbitration agreement contained in such an instrument, which is not chargeable to payment of stamp duty, as being non-existent, unenforceable, or invalid, pending payment of stamp duty on the substantive contract / instrument ? "

One of the issues raised in this appeal against the Bombay High Court judgment was whether an arbitration agreement would be enforceable and acted upon, even if the Work Order is unstamped and un-enforceable under the Stamp Act? In this case, the Commercial Court, before which a suit was filed by one of the parties to the contract, had refused to refer the parties to arbitration. The High Court allowed a writ petition filed by one of the parties aggrieved by non-reference and set aside the order of Commercial Court.

(i) that an arbitration agreement in an unstamped commercial contract cannot be acted upon, or is rendered un-enforceable in law; and

(ii) that an arbitration agreement would be invalid where the contract or instrument is voidable at the option of a party, such as u/S. 19 of the Indian Contract Act, 1872.

Disagreeing with the said judgment, the bench said:

"Since the arbitration agreement is an independent agreement between the parties, and is not chargeable to payment of stamp duty, the non-payment of stamp duty on the commercial contract, would not invalidate the arbitration clause, or render it un-enforceable, since it has an independent existence of its own. The view taken by the Court on the issue of separability of the arbitration clause on the registration of the substantive contract, ought to have been followed even with respect to the Stamp Act. The non-payment of stamp duty on the substantive contract would not invalidate even the main contract. It is a deficiency which is curable on the payment of the requisite Stamp Duty.

"The second issue in SMS Tea Estates that a voidable contract would not be arbitrable as it affects the validity of the arbitration agreement, is in our view not the correct position in law. The allegations made by a party that the substantive contract has been obtained by coercion, fraud, or misrepresentation has to be proved by leading evidence on the issue. These issues can certainly be adjudicated through arbitration."

The court also noticed another judgment in Garware Wall Ropes Limited v. Coastal Marine Constructions and Engineering Limited (2019) 9 SCC 209 in which it was observed that the arbitration clause would be non-existent in law, and unenforceable, till Stamp Duty is adjudicated and paid on the substantive contract. Taking note of the fact that this judgment was quoted in approval by a three judge bench in Vidya Drolia & Ors. v. Durga Trading Corporation. The bench observed:

"In our view, there is no legal impediment to the enforceability of the arbitration agreement, pending payment of Stamp Duty on the substantive contract. The adjudication of the rights and obligations under the Work Order or the substantive commercial contract would however not proceed before complying with the mandatory provisions of the Stamp Act. The Stamp Act is a fiscal enactment for payment of stamp duty to the State on certain classes of instruments specified in the Stamp Act. Section 40 of the Indian Stamp Act,1899 provides the procedure for instruments which have been impounded, and sub-section (1) of Section 42 requires the instrument to be endorsed after it is duly stamped by the concerned Collector. Section 42(2) provides that after the document is duly stamped, it shall be admissible in evidence, and may be acted upon."

Regarding the issue as to which authority would exercise the power of impounding the instrument under Section 33 read with Section 34 of the Maharashtra Stamp Act, in a case where the substantive contract contains an arbitration agreement, the bench held as follows:

The bench, however set aside, the High Court judgment on the ground that the order passed by the Commercial Court was an appealable order under Section 37(1)(a) of the Arbitration and Conciliation Act, and thus the Writ Petition was not maintainable. The bench also issued the following directives:

-We direct the Secretary General of this Court to impound the Work Order dated 28.09.2015, and forward it to the concerned Collector in Maharashtra for assessment of the Stamp Duty payable on the said instrument, to be completed within a period of 45 days from receipt of the same;
-On determination of the Stamp Duty payable, the Appellant / Plaintiff is directed to make the payment assessed by the Collector u/S.30(f-a) of the Maharashtra Stamp Act, 1958 within a period of four weeks from the date of receipt of communication of the Order;
-The Stamp Duty assessed by the Collector will, however, be subject to the statutory right available to file a revision / appeal under the Maharashtra Stamp Act.
-With respect to the invocation of the Bank Guarantee, the Appellant may seek interim relief u/S. 9 of the Arbitration and Conciliation Act, 1996