'Not Allowed To See Her Face For Last Time' : Hathras Victim's Family Break Down Before Allahabad HC 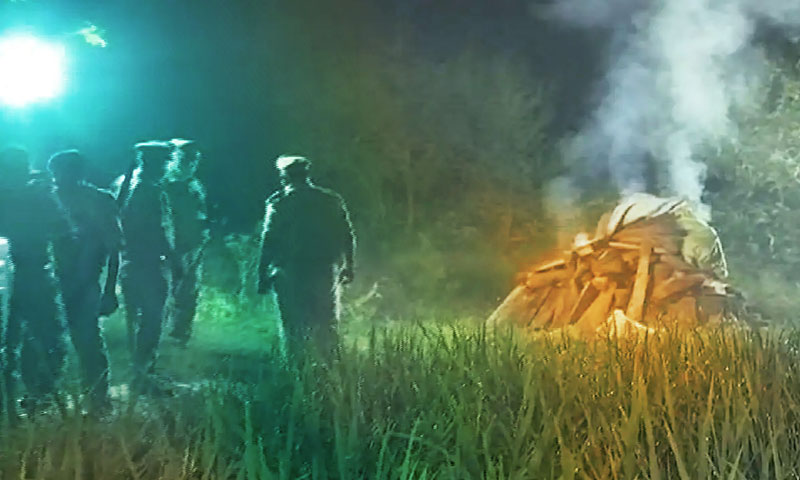 Narrating their grief over denial of the fundamental right of a decent cremation to their daughter, the family of the Hathras victim told the Allahabad High Court that the midnight cremation of the victim's body was done without their consent. The High Court order records the statements made by the victim's father before the Bench of Justices Pankaj Mithal and Rajan Roy...

Narrating their grief over denial of the fundamental right of a decent cremation to their daughter, the family of the Hathras victim told the Allahabad High Court that the midnight cremation of the victim's body was done without their consent.

The High Court order records the statements made by the victim's father before the Bench of Justices Pankaj Mithal and Rajan Roy thus,

"He pleaded that he wants justice for her daughter. He had no grudge against the officials except that they refused to hand over the body of her daughter to them and they were not allowed to cremate her in accordance with the Hindu rituals. He stated that neither he nor any member of the immediate family participated in the cremation and that the administration cremated the body in the night itself despite insistence on their part to have the cremation in the morning."

The victim's mother also broke down in the Court as she recounted the incident and told the Court that she could not even see her daughter's face for the last time.

"The mother of the deceased lamented that she wanted to see the face of her daughter, but she was not allowed and against her wishes, the body was cremated in the night. She broke down while narrating the entire story starting from the date of the incident when the girl was allegedly raped," the order states.

Some of the authorities misbehaved with the relatives of #Hathras victim, bhabhi of the deceased tells HC.#HathrasCase pic.twitter.com/c9vhGEq63U

Based on these submissions, the Court was of a prima facie opinion that the basic human and fundamental rights of the victim had been violated, as no one from the family could participate in the cremation and the last rites of the deceased victim.

Significantly, the District Magistrate, Hathras had claimed in Court that the cremation was done with full honour.

He denied that kerosene was used to cremate the victim and informed the Court that,

"A proper pyre was laid. In the cremation, the kerosene was not used and probably, the cans which may be appearing in some of the videos were those carrying Ganges Water (Ganga Jal)."

However, the Court was not convinced with these submissions and it observed that the District Magistrate could not satisfy the Court about observance of last rites while cremating the victim's body as per traditions and customs of the family.

Inter alia, the victim's brothers claimed that the state authorities had acted in an "highhanded manner" in cremating the dead body of their deceased sister and that her last rites were performed in their absence.

It was further alleged by the victim's sister in law that the local administration "be-fooled the family" and some of the authorities "misbehaved" with the family's relatives.

The High Court has therefore directed the State administration to ensure the safety and security of the family members of the victim, so that no harm is caused to them.

It may also be noted that there were various speculations regarding involvement of higher authorities from Lucknow who were alleged to have issued directions for the midnight cremation. However, denying all such claims, the District Magistrate categorically submitted, that it was a "collective decision" of the local administration, given the heated situation in the village.

The order records his statement as thus:

"On 30th September, 2020, the next day, the C.B.I. Court at Lucknow was to pronounce verdict against the accused in the case of demolition of Babri Masjid, therefore, the entire State was on high alert and most of the forces were deployed for the control of the situation that may erupt after pronouncement of the aforesaid judgment. Thus, looking to the sensitivity of the matter and the intervention of political parties in consultation with the Commissioner, Aligarh; ADG, Agra; I.G., Aligarh, S.P., Aligarh and himself, a collective decision was taken to cremate the body in the night itself, as it was expected that if it is delayed and is undertaken in the morning, about 10,000 people would collect and make it a caste/political issue. The entire decision was taken in a bona fide manner to maintain the law and order situation"

He categorically stated that no one from above or Lucknow had instructed him to take such decision or had directed for carrying out the cremation at night, but in the same vein, he stated that he was not aware if some instructions had been given by the State in this regard to the senior officers, who were involved in the collective decision, i.e., the Commissioner, Aligarh; ADG, Agra and I.G., Aligarh.

The Magistrate also claimed that the father of the deceased victim was "convinced for cremation in the night" and it was on his consent only that the body was cremated.

The Lucknow Bench of the Allahabad High Court has expressed its displeasure on the entire incident and deprecated the local authorities for violating the victim and her family's human and fundamental rights.

"India is a country which follows the religion of humanity, where each one of us are supposed to respect each other in life and in death. However, the above facts and circumstances, as of now, ex facie, reveal that the decision to cremate the victim in the night without handing over the body to the family members or their consent was taken jointly by the administration at the local level and was implemented on the orders of the District Magistrate, Hathras. This action of the State Authorities, though in the name of law and order situation, is prima facie an infringement upon the human rights of the victim and her family," the Bench of Justices Pankaj Mithal and Rajan Roy observed.

After hearing the versions of both the parties, the Court was of a prima facie opinion that the administration had failed to show "any good reason" as to why they could not hand over the body to the family members for some time, "say for even half an hour, to enable them to perform their rituals at home and thereafter to cremate it either in the night or next day."

"The victim was at least entitled to decent cremation in accordance with her religious customs and rituals which essentially are to be performed by her family. Cremation is one of the 'Sanskars' i.e., antim sanskar recognized as an important ritual which could not have been compromised taking shelter of law & order situation."

The Court has directed the Additional Chief Secretary (Home) to come out with a draft policy by the next date of hearing, so that proper guidelines in that regard may be laid to avoid incidents of this kind in future.