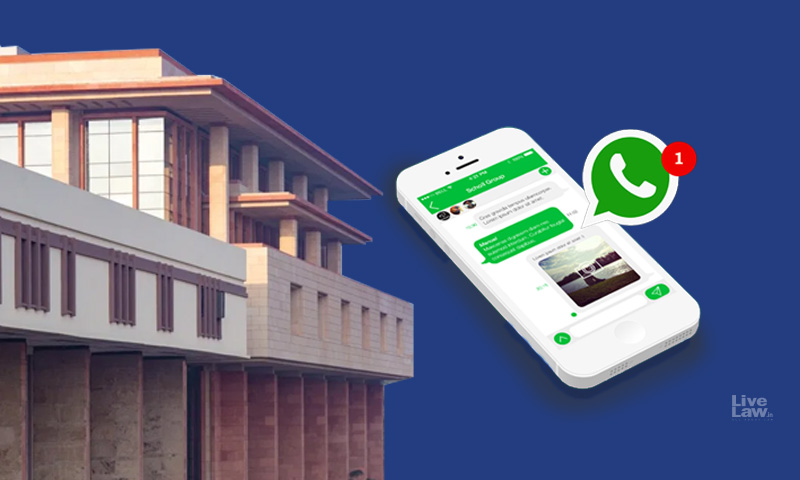 In an affidavit filed before the Delhi High Court, WhatsApp has submitted that its newly updated privacy policy (of the year 2021) does not affect the privacy of personal messages (of its users) with friends and family in any way. In its affidavit, the Facebook-owned company has stated that the 2021 Update is not "mandatory", and that WhatsApp is not forcing anyone to accept the...

In an affidavit filed before the Delhi High Court, WhatsApp has submitted that its newly updated privacy policy (of the year 2021) does not affect the privacy of personal messages (of its users) with friends and family in any way.

In its affidavit, the Facebook-owned company has stated that the 2021 Update is not "mandatory", and that WhatsApp is not forcing anyone to accept the newly introduced update.

The Policy, WhatsApp states, gives its User the liberty to either accept the 2021 Update or they can choose not to do so, and stop using the messaging platform and that they also have the option to delete their WhatsApp accounts as and when they want.

Differentiating itself from other online platforms, WhatsApp has stated in its affidavit that it is giving its users, the control and choice, which others do not provide and most of the platforms weren't as transparent as WhatsApp is and other platforms simply imply the consent of their users through continued use of their service, however, WhatsApp was explicitly asking for the consent of its users.

In this backdrop, WhatsApp has stated that even when the terms and privacy policy in question has been followed by online platforms across the industry, yet the Petitioners were singling out WhatsApp.

Apart from this, the affidavit avers that if the any interference would be made in its 2021 Update, it would "cripple the entire industry of internet-based applications and websites".

Further, WhatsApp has averred that the 2021 Update provides its users with a clear and accessible statement of WhatsApp's data practices and which allows them to make an informed choice and to decide on their own, as to whether or not they agreed to the 2021 Update.

The Affidavit urges Court not to establish new data protection rights, despite the fact that a Joint Parliamentary Committee has been deliberating over the Personal Data Protection Bill, 2019 ("PDP Bill") since January 2020 as the same would be "contrary to the principle of judicial restraint."

Naming the private companies such as Google, Microsoft, Zoom, Zomato, Republic World, Ola Cabs, True caller, Big Bakset, Koo, and public companies such as Aarogya Setu, Bhim, Air India, Sandes, Government e-Marketplace (GeM), Indian Railway Catering and Tourism Corporation (IRCTC), etc to state that they have a similar privacy policy (if compared with WhatsApp's 2021 policy) and that the abovenamed private companies have retained their right to collect their users' data.

Earlier, responding to public interest litigation before the Delhi High Court, the Centre had sought that WhatsApp be restrained from implementing its new privacy policy and terms of service dated 04th January 2021 pending adjudication on the case by the court.

The petition has been filed by one Dr. Seema Singh, and argued by Adv. Meghan, along with Advocate Vikram Singh states that the new WhatsApp privacy policy released on Jan 4, 2021 is violative of the fundamental right to privacy under Article 21, because while its old privacy policy which was issued on Jul 20, 2020 provided the users to opt-in or out of data sharing with other Facebook companies, the new policy does not provide the users any option to protect their personal data by opting out of their policy.

Last week, the Delhi High Court issued notice to the Centre and social media platforms, Facebook and WhatsApp seeking their responses on a PIL challenging the new privacy policy of WhatsApp.

The Bench of Chief Justice D. N. Patel and Justice Jasmeet Singh sought their response on a PIL petition filed by one Harsha Gupta (an Advocate and Educationist) through Advocates Vivek Sood (Senior advocate) and Dhruv Gupta.

The Union Of India, WhatsApp, and Facebook have been impleaded as the respondent parties in the petition.

Further, in March 2020, in a significant development, the Competition Commission of India had ordered a probe into the new privacy policy of WhatsApp, after making a prima facie observation that it was violative of the Competition Act 2000.

Importantly, last month, a single-judge bench of Justice Navin Chawla of the Delhi High Court rejected Facebook Inc and its subsidiary WhatsApp's challenge to the order by the Competition Commission of India directing a probe into WhatsApp's new privacy policy for being allegedly anti-competitive.

The Court had said that it found no merits in the petition and refused to quash the CCI probe. The bench had reserved its verdict on Apr 13 on Facebook Inc and its subsidiary WhatsApp's challenge to a Competition Commission of India (CCI) order directing for a probe into WhatsApp's new privacy policy for being anti-competitive.