Once Accused Makes A Plausible Defence In His 313 CrPC Statement, Burden Is On The Prosecution To Negate It: SC [Read Judgment] 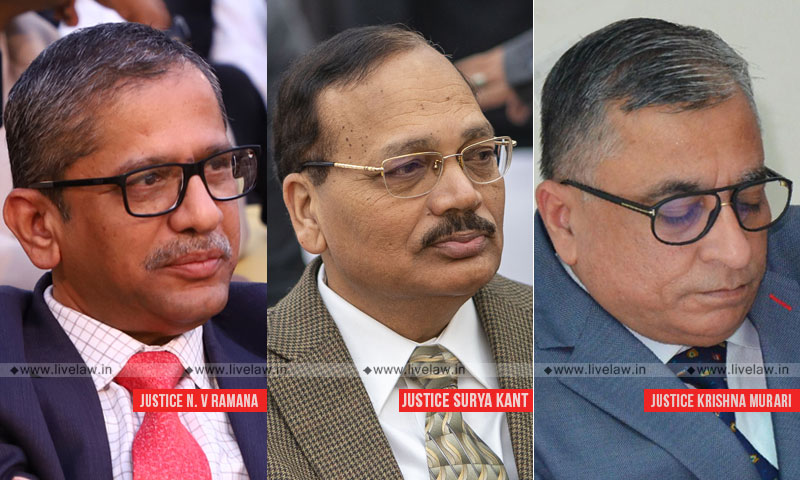 The Supreme Court has held that once a plausible version has been put forth by the defence at the examination stage of Section 313 of the CRPC, then it is for the prosecution to negate such a defense plea.A bench of Justices NV Ramana, Surya Kant & Krishna Murari has further reiterated that failure of the trial court to fairly trial apply its mind and consider the defence could endanger...

The Supreme Court has held that once a plausible version has been put forth by the defence at the examination stage of Section 313 of the CRPC, then it is for the prosecution to negate such a defense plea.

A bench of Justices NV Ramana, Surya Kant & Krishna Murari has further reiterated that failure of the trial court to fairly trial apply its mind and consider the defence could endanger the conviction itself.

"Unlike the prosecution which needs to prove its case beyond reasonable doubt, the accused merely needs to create reasonable doubt or prove their alternate version by mere preponderance of probabilities. Thus, once a plausible version has been put forth in defence at the Section 313 CrPC examination stage, then it is for the prosecution to negate such defense plea", stated the judgment authored by Justice Surya Kant.

The court has thus, set aside an appeal against a judgment of Punjab & Haryana High Court which confirmed the sentence of conviction of three years RI and fine of Rs. 2000 under Sections 366A & 506 of the Indian Penal Code (IPC), passed by the Additional Sessions Judge, Barnala.

The prosecution story revolved around single lady (Appellant) living with her child, mother and a young boy who lived in the prosecutrix's neighbourhood as a tenant. About a week prior to registration of the police complaint, the appellant called the prosecutrix to her house and tried to entice her to indulge in illicit intercourse with the rich tenant boy in return for clothes and trips from him. The appellant allegedly pushed the prosecutrix into the room with the tenant boy and bolted it from outside. The prosecutrix's father appeared after hearing his daughter's screams. Following this, both father and daughter returned home and did not inform anyone, fearing for a loss to their reputation. Later, the appellant caught hold of the prosecutrix and threatened to kill her and her brother of anyone was informed of the matter.

It was after this incident that the prosecutrix went to lodge a police complaint with her father about the two incidents.

During the trial, the appellant denied all allegations and offered an alternate version in her statement under Section 313 of the Code of Criminal Procedure, claiming that "there was no tenant at all in her home and that the complaint was nothing but motivated revenge at the instance of one Bhola Singh against whom she had levelled allegations of rape a few months ago"

Trial Court focused on negated the defences projected by the appellant and noted that there no reason to disbelieve the prosecutrix and her father on the issue of contradictions of important aspects in testimonies of the father and daughter like physical description and antecedents.

The five­ day delay in registration of the FIR was condoned for having arisen out of natural fear of reputation of the prosecutrix and her family, as well as the mild severity of the case and non examination of two independent witnesses were ignored as being normal reluctance of bystanders.

Assailing the Trial Court's order, appellant approached High Court which refused to interfere with the order of conviction observing that the statement of accused under Section 313 "appeared to be an after-thought and that "it was impossible that anyone would falsely implicate a woman in such like offence"

Aggrieved, the Appellant approached the Supreme Court in Appeal.

What the Supreme Court held:

The Supreme Court set aside the order of the High Court & Trial Court, holding that the prosecution had failed to discharge its burden of proving the guilt of the Appellant under Section 366A & 506 of the IPC beyond reasonable doubt.

"Under the Code of Criminal Procedure, 1973 after the prosecution closes its evidence and examines all its witnesses, the accused is given an opportunity of explanation through Section 313(1) (b). Any alternate version of events or interpretation proffered by the accused must be carefully analysed and considered by the trial Court in compliance with the mandate of Section 313(4). Such opportunity is a valuable right of the accused to seek justice and defend oneself. Failure of the trial Court to fairly apply its mind and consider the defence, could endanger the conviction itself"

In light of this, the bench stated that while the prosecution needs to prove its case beyond reasonable doubt, the accused merely need to create a reasonable doubt or prove their alternate version by mere preponderance of probabilities and the trial Court's analysis of the appellant's Section 313 defence ought to have been deeper, before concluding it as being false or untrustworthy.

While taking note of the gross miss-appreciation of conflicting testimonies and the complete disregard of contradictions by Trial Court, bench noted,

"The trial Court has summarily disregarded the contradictions highlighted by the defense side, on the premise that such contradictions had no material bearing and that there was no reason to disbelieve the prosecutrix. These reasons, in our considered opinion, are not only contrary to the record but they also lead to an impermissible reversal of the burden of proof imposed in criminal trials. There are numerous clear contradictions between the testimonies of these two star ­witnesses, which we find fatal to the prosecution case"

Court has also observed that as regards making "sweeping assumptions" concerning delays in registration of FIRs for sexual offences, send a problematic signal to the society and "create opportunities for abuse by miscreants".

The bench stated that the prosecution failed in "proving the intention of the appellant to cause alarm or compel doing/abstaining from some act, and not mere utterances of words, is a pre­requisite of successful conviction under Section 506 of IPC"

The appellant was represented by Advocate Dushyant Parashar.