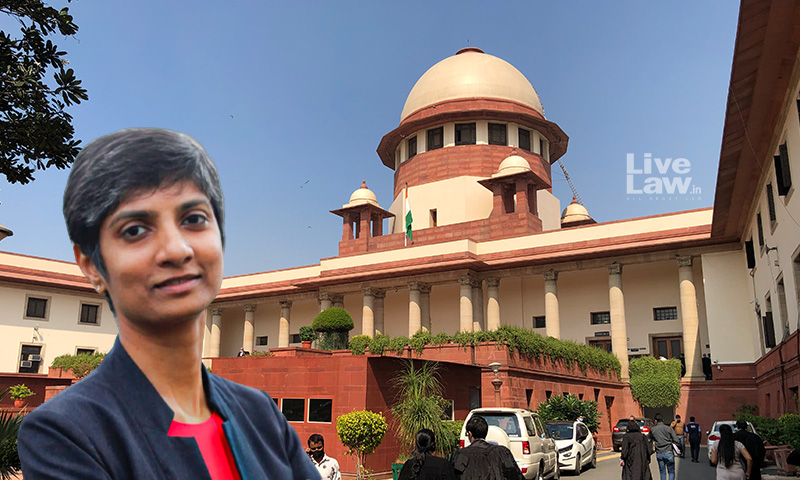 Senior Advocate Menaka Guruswamy, for one of the petitioners challenging the various provisions of the Prevention of Money Laundering Act, told the Supreme Court on Wednesday that of the 1700 raids conducted and 1569 specific investigations by the Enforcement Directorate(ED)- with rates increasing by 20% every year and then doubling and tripling- since 2011, only 9 convictions have...

Senior Advocate Menaka Guruswamy, for one of the petitioners challenging the various provisions of the Prevention of Money Laundering Act, told the Supreme Court on Wednesday that of the 1700 raids conducted and 1569 specific investigations by the Enforcement Directorate(ED)- with rates increasing by 20% every year and then doubling and tripling- since 2011, only 9 convictions have been secured.
A bench comprising Justice AM Khanwilkar, Justice Dinesh Maheshwari and Justice CT Ravikumar is hearing a batch of petitions seeking safeguards for arrest, search and attachment process by the ED under PMLA.
"What the agency has been able to secure in hundreds and hundreds of cases has been attachment of property, arrest, months of scheduled and unscheduled interrogation, seizing of properties, signing of documents, self-incrimination, resulting in a violation of well-established principles that we agreed to in 1950 when the Constitution came in", she urged.
"In the case that I represent, the person was not only arrested, not only had her property including her only home seized by the authorities, attached, not only was subjected to multiple months of interrogation, but she got a copy of the ECIR two years after her only home is attached! She happens to be a national awardee, recognised for good work by the President of this country. And how does she get a copy of this? Because she chooses to challenge the attachment before the Appellate Tribunal. The Appellate Tribunal rules in her favour and then the ED is obligated to attach a copy of the ECIR. Can we imagine a world where for multiple years I am interrogated, I am threatened, I am arrested, I have my home attached and it is only when I choose to challenge before the appellate tribunal that I finally get a copy of the actual complaint? That is the world we don't have to imagine, that is today's world of PMLA!", she pressed.
"In my case, the value of the property attached was a little under 10 crores. Eventually the appellate tribunal finds that only the property worth the amount that I was initially charged with laundering, that is 65 lakhs, in the predicate offence should be attached!", she continued.
"Mine was one of the last cases adjudicated by the tribunal. Because post-2019, the appellate Tribunal has been virtually unstaffed, no appointments made, no chairman, systematically the members have been retiring. Today, only one member of a five person committee is serving . If today I had challenged, I would not have been heard because the appellate tribunal is unstaffed and unserviceable, eliminating the remedy that I have about that unjustified attachment!", submitted Dr. Guruswamy
She indicated the propositions she wished to raise as follows;
1. provisions of the PMLA must stand the test of due process under Article 21;
2. Section 50 of the PMLA entrenches upon the right to liberty of persons summoned under the act and violates the right against self-incrimination;
3. Section 44(1)(d) of the PMLA creates irreversible prejudice in the accused as to the trial which is adjudicating the predicate offence;
4. PMLA creates an overbroad offence with no fetters on investigatory Powers;
5. The Schedule of offences renders several bailable offences as non-bailable;
6. Provisions of the PMLA regarding attachment run contrary to the provisions in statutes containing the predicate offence;
7. Adjudicatory paralysis of the appellate tribunal
"In the present case, the petitioner is the CEO of the company. Company enters into a contract with the state government. FIR is filed which the CBI picks up. Then ECIR is filed unknown to the petitioner and summons were issued to the petitioner to appear. Soon thereafter the house and other assets of the petitioner are attached by way of provisional attachment. The attachment was finally partly set aside by the appellate authority which limited the seizure to the amount mentioned in the chargesheet for the predicate offence. During this, she got a copy of the ECIR. A complaint was filed before the special court by the ED. Since 2018, the matter has been listed more than 36 times with neither the trial for the predicate offence nor the laundering offence progressing. The ECIR is six years old and the court is yet to take cognisance. The scheme of the PMLA has enabled seizure of assets, examination of the petitioner under the special procedure and search under section 50, a six-year long pre-trial procedure both in the predicate offence and in the laundering offence, limited right of participation as accused and the infamous reversal of the burden of proof that PMLA imposes", advanced Dr. Guruswamy.
"CBI is an agency which deals with murder, terrorism, grave issues of national security, and they have a procedure manual has always been available to every petitioner, every defence lawyer in this country. And the CBI proceeds as per that manual. It is not just a book but the procedural propriety guaranteed to the accused and their lawyers in an adversarial system. Why is it then that what the Enforcement Directorate does is shrouded with a cloak of silence? It is the Bermuda Triangle of the disappearance of constitutional values? By importing offence after offence in the ever expanding schedule, we are ensuring we will become a jurisdiction of the disappearance of constitutional values", she continued.
"I am forced under section 50 to state the truth, whoseever perception it may be. Otherwise, there is resort to section 63 and I am threatened with punishment with imprisonment. I am alone, I am in that interrogation room, I am rarely if ever permitted to go with a counsel. At that time, for any person in this country, innocent or guilty, I am entitled to 2 friends- the code of criminal procedure and the Constitution. You have taken both away from me when I am alone in the room. That is the problem of PMLA!", she urged.
The hearing in the batch case will continue tomorrow:
Case : Vijay Madanlal Choudhury and others vs Union of India and others Special Leave to Appeal (Crl.) No(s). 4634/2014 and connected cases.