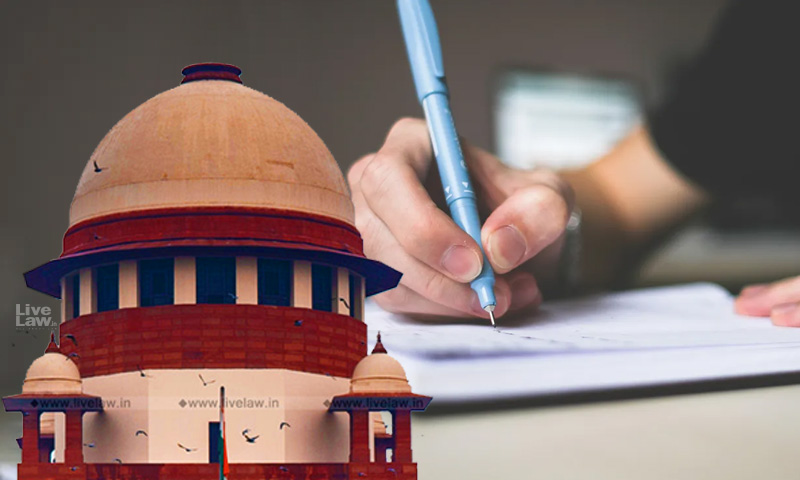 Subscription starts from
₹ 599+GST
(For 6 Months)
View Plans
Premium account gives you:
Subscribe Now
Already a subscriber?
Login
The Supreme Court on Thursday allowed students challenging the Assessment Scheme dated July 10, 2020 issued by National Institute of Open Schooling (NIOS) to make a representation before the NIOS for revaluation of results and seek basis of allotted marks in their theory papers.

The assessment scheme came to be notified pursuant to cancellation of Public examination which was rescheduled to commence from July 17, 2020.

A bench of Justices AM Khanwilkar, Dinesh Maheshwari & Sanjiv Khanna was hearing a plea seeking directions to the NIOS to re-evaluate the results of the petitioners and for awarding of marks in the facts and circumstances of the case on the basis of their TMA/Practical marks as specified in Clause 5 (d) of the Assessment scheme.

"That on the bare perusal of the marksheet attached in the said petition, it would be amply clear that the students have secured almost 90% to 100% in their TMA/Practical marks and yet, in their results, they have been given marks bear minimum percentage which ranges from 33% to 50%. For bright students like them, the awarding of marks in such a fashion is not only against the order passed by this Hon'ble Court mentioned hereinabove but also against the scheme and more especially clause 5(d) of the said Scheme" - the petition reads.

During the hearing, Advocate Rishi Malhotra who was representing 7 students submitted that the fourth clause i.e. 5 (d) has led the all students of Class XII and class X to approach Court in order to point out an anomaly, which has resulted in great hardship.

"For those students who by any reasons had not appeared in any of the subjects and are governed by Clause 5(d) as afore-mentioned, the respondent NIOS Board instead of awarding marks based on practical/TMA has adopted a very novel way by calculating the marks on the average performance in theory of last 3 public examinations in those subjects for which the student was registered earlier"

The Board, in doing so, had completely ignored a very vital fact that all the students herein were freshly enrolled to take examinations and thus, there was no question of them in appearing in any of the last 3 public examination, Malhotra said.

"If that be the case, then the methodology adopted by the respondent/Board in awarding marks to these students would necessarily been that they have awarded marks solely on the basis of the other students last 3 public examinations performance. It is respectfully submitted that the only way out in such cases would have been award marks to these students on the basis of TMA and/or practical marks which the concerned students have secured" - Excerpt of plea.

In light of the above, the Counsel for NIOS stated that the same shall be considered by the NIOS within one week from today as Justice Khanwilkar stated that this was indeed an anomaly, if it did exist.

The plea states that despite the said order dated July 31, 2020, the Board had again assessed the marks for the students who fall in the category of 5(d) of the Assessment Scheme again on the basis of other students performance.

"This can be gauged from the fact that in all the cases herein the students were to give exams in the month of March/April, 2020 and they did not have any past public examination record. Meaning thereby, these students were only left with their TMA and/or practical marks and in that eventuality the respondent/Board ought to have awarded marks only on that basis and nothing else" - the plea states.