'Orchestrated Efforts To Malign The Image Of Government': UP Govt Asks SC To Order CBI Investigation In Hathras Case 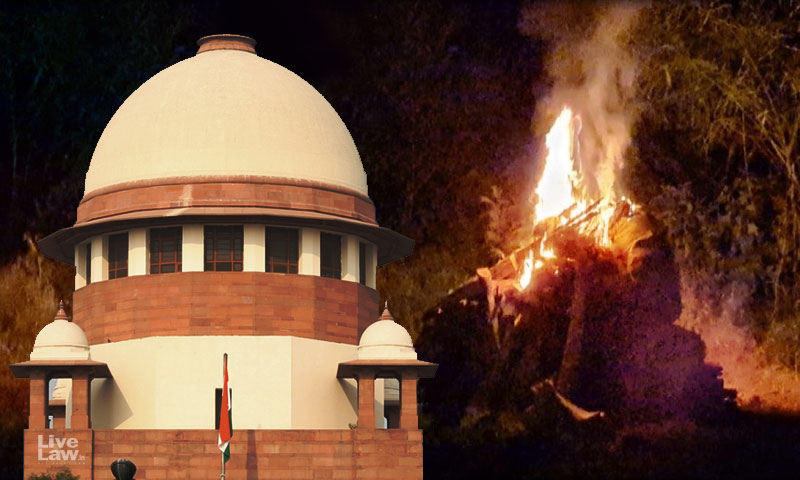 The UP Government has asked the Supreme Court to order CBI inquiry into the Hathras Gang Rape case so as to ensure that a fair and impartial investigation takes place by a Central Agency "which is not within the administrative control of the State administration".Notably, the UP government has requested the SC to direct CBI investigation not only into the case related to the alleged rape...

The UP Government has asked the Supreme Court to order CBI inquiry into the Hathras Gang Rape case so as to ensure that a fair and impartial investigation takes place by a Central Agency "which is not within the administrative control of the State administration".

Notably, the UP government has requested the SC to direct CBI investigation not only into the case related to the alleged rape and murder of the 19-year old Dalit woman of Hatras, but also into the case registered by the UP Police alleging criminal conspiracy to spread caste conflict by sections of media and political interests using the Hathras incident.

The submission comes in a PIL filed by Advocate Sanjeev Malhotra on behalf of social activist Satyama Dubey, seeking either CBI investigation or appointment of a SIT to look into the matter. The plea also sought transfer of the matter from Uttar Pradesh to Delhi alleging failure of the State Government to take action against the accused persons.

In its reply, the UP Government has submitted that it took all steps to ensure that even an iota of suspicion or doubt do not remain and that the investigation has been progressing fairly and with efficiency strictly in accordance with law.

However, despite such "diligent investigation", different "false narrative" is gaining momentum and it is urged that the CBI takes over the matter.

Inter alia, the UP Government has claimed that a FIR in the matter was registered "immediately" on September 14, 2020, on receipt of information. It is submitted that first the FIR was registered under Section 307 of IPC for attempt to murder; however, after recording of the victim's statement on September 19, the charge of "assault on a woman with intent to outrage her modesty" under Section 354 was added.

It is further submitted that the charge of Gang Rape under Section 376D was added after the victim revised her statement on September 22, 2020.

#HathrasCase : No signs suggestive of rape, UP Govt tells SC.
The provisional medical report of JJ Medical Hospital Aligarh did not have prima facie findings of rape.
The samples were sent to FSL Agra, which gave its final opinion ruling out rape, says the UP Govt affidavit. pic.twitter.com/GmeqKwWiHE

Further it is claimed that the Police received intelligence inputs that "the whole issue was being exploited and a caste / communal color was being given."

"Intelligence inputs were specifically received late at night of 29.09.2020 that lakhs of protestors of both communities / castes along with the supporters of some political parties and media will assemble in the morning of 30.09.2020 at the village which is likely to turn violent and will lead to major law and order problems.. There was also high alert in the district due to likely pronouncement of the Ayodhya - Babri case and further the administration has also to ensure there are no large gatherings in the Covid times in view of the strict Central Govt. guidelines. In such extraordinary and severe circumstances, the district administration took the decision to convince the parents of the deceased to cremate her with all religious rites at night to avoid large scale violence in the morning to cremate the body of the victim which was lying for almost than 20 hours after her death and post-mortem."

The State Government has claimed that there has been "orchestrated efforts" to "malign the image of Government on social media" by attributing "baseless comments" & building up a "distorted narrative" on the Hathras case.

Citing some illustrations of the case was reported on news/ social media, the state Government submitted,

"The above diverse examples from all across the country from fake & verified handles from people of different political spectrums clearly points towards a conspiracy fomented by rival political parties to defame & discredit the Government of UP through it's members. The Proxy war of Political parties fought by their members directly & through several fake handles by propagating fake news through sheer copy paste of content is an obvious attempt to tarnish the image of dignitaries of the Government of Uttar Pradesh through sheer propaganda. Such vicious propaganda is also leading to a law & order situation in various districts where the district units of rival political parties are instigating & mobilising the people to come on streets to hold protests based on such doctored images & baseless allegations."

It is informed that following the victim's death on September 29, 2020, the charge of Murder under Section 302 has also been added in the FIR and it is urged that the matter be taken up by CBI.