Our Systems Will Truly Belong To The People When We Honour And Cherish Our Diversity: CJI Ramana 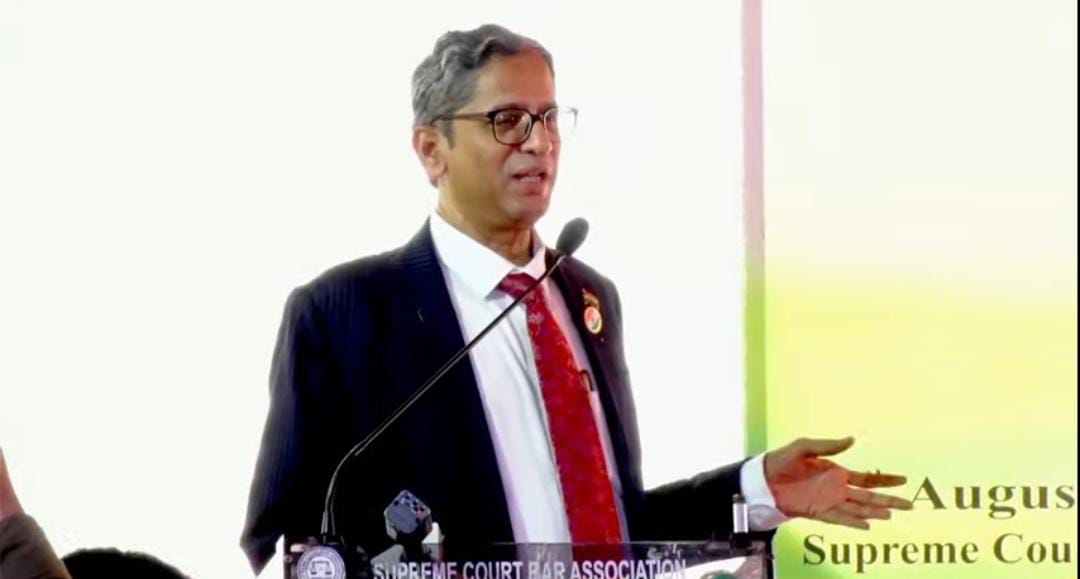 Chief Justice of India, N.V. Ramana was invited as the Chief Guest at the 76th Independence Day Celebrations, organised by the Supreme Court Bar Association (SCBA) at the Supreme Court Lawns. CJI Ramana, while speaking about his endeavours of the "Indianisation" of the judiciary stated that the Indian system would truly belong to the people of India when the citizens honoured and cherished the diversity of the country.

The CJI commenced his address by underscoring the importance of the Independence day by stating that the struggle of independence was not merely for freedom from colonial power, but was for dignity for all and for laying the foundation of democracy. He credited the laying down of the foundation of democracy to the Constitution of India, which he said was the most "progressive and scientific document" and was framed after years of detailed deliberation in the Constituent Assembly. CJI Ramana referred to the celebration as the "transformational journey of 75 years" and highlighted the contribution of great freedom fighters and legal minds such as Mahatma Gandi, Motilal Nehru, Sadar Patel, CR Das, Lala Lajpat Rai, Andhra Kesari Tanguturi Prakasam Pantulu, Saifuddin Kitchlew and PV Rajmannar, who fought their battles from courts to streets, which made such journey possible. He stated that it was the voice of these nationalist lawyers against the colonial laws and unlawful detentions, which constituted the narrative of the nation and gave a new importance to the Indian freedom struggle.

CJI Ramana also remembered the contribution made by the lawyers, many of who left their lucrative practice to be a part of the endeavour of drafting the Indian Constitution.

He stated that each organ had an obligation under the constitutional framework and that justice was not only the responsibility of the Court as understood by Article 38 of the Indian Constitution, which mandates the State to secure justice- social, economic and political. While elaborating upon the same, he stated–

"Every deed of each organ has to be in the spirit of the Constitution."

"Our judicial system is not only unique for its commitment to the written constitution and its spirit but also because of the immense faith reposed by the people in the system. People are content that they will get relief and justice from the judiciary. It gives them the strength to pursue a dispute. They know that when things go wrong, the judiciary will stand by them. The Indian Supreme Court is the guardian of the Constitution in the world's largest democracy. The Constitution gives wide ranging powers to the Supreme Court to do complete justice. This power to do absolute justice under Article 142 brings to life, the moto of the Indian Supreme Court- where there is Dharma, there is victory."

At the same time, the CJI also underscored the importance of contribution of citizens in maintaining a justiciable society. He stated that while the Indian Constitution has recognised inalienable rights, it also places upon citizens some fundamental duties, which are not merely pedantic or technical, but are the key to social transformation. He stated that in order to meaningfully contribute to society the citizens must understand the Constitution, the system and its nuances. In this context, he stated that spreading constitutional culture was essential and language was a significant key to such accessibility. He said that–

"It has been my personal endeavour to advocate for the 'Indianisation' of the judiciary. Our systems will truly belong to the people when we honour and cherish our diversity. The lawyers are best placed to be ambassadors in promoting constitutional culture and spirit. While it is the mandate of the constitutional courts to uphold human rights and fundamental freedoms, the lawyers play an instrumental role in leading the courts in right direction."

In his address, the CJI also spoke about the threat of the COVID-19 pandemic and urged people to be careful as the cases of the infection were on a rise again. While speaking about the losses incurred due to the pandemic he said–

"Many near and dear ones have lost lives…The Court has inherited backlog of nearly a year on the account of Covid and the lockdowns. In the last 16 months we could physically assemble for only 55 days. I wish situation was different and more productive. It is just and natural for people to have high expectation, but regrettably the forces of nature were against us. I hope in the near future the situation will become normal and the courts can function in full capacity."

At the same time, the CJI thanked Justice Chandrachud and the E-committee for creating the infrastructure for virtual hearing which assisted the court in dispensing justice even during a deadly pandemic.

CJI Ramana also spoke about the issue of appointment of judges, raised by many. He declined to elaborate much on it and instead said that–

"You are all constitutional lawyers, you know the procedure of appointment of judges and on several occasion he (President of SCBA, Mr. Vikas Singh) raised the similar issue and I had answered. I do not want to elaborate on that. I appreciate his and his teams commitment and stubbornness. He is successful in most of the demands. I congratulate him more successes in his tenure. My brother Justice Lalit is going to take care of the issues which he is going to raise henceforth."

With this, CJI Ramana concluded his address.