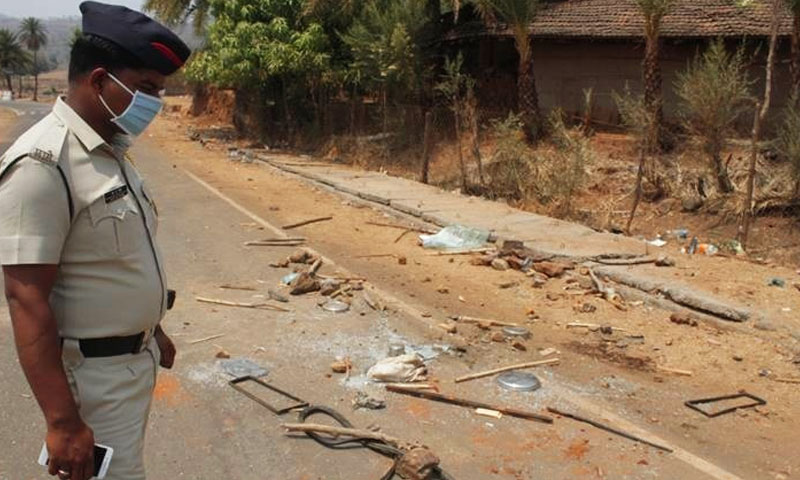 The Supreme Court on Thursday asked the Maharashtra Government to place on record the chargesheets that have been filed in relation to the lynching and consequent death of two Sadhus in Palghar. While considering a clutch of petitions seeking investigation by either the CBI or the NIA into the alleged complicity of the police in the incident, the Bench comprising of Justices Ashok...

The Supreme Court on Thursday asked the Maharashtra Government to place on record the chargesheets that have been filed in relation to the lynching and consequent death of two Sadhus in Palghar.

While considering a clutch of petitions seeking investigation by either the CBI or the NIA into the alleged complicity of the police in the incident, the Bench comprising of Justices Ashok Bhushan and R Subhash Reddy also sought details regarding the inquiry against the concerned police personnel.

The State must therefore submit the status of the inquiry against police officials to the Court, and place the charge sheets on record since Justice Bhushan asserted that "Court wishes to examine the charge sheet".

Advocate Ashutosh Lohia, representing the Hindu Sadhus of Shri Panch Dashban Juna Akhara, pressed for a CBI investigation against the police officials connected with the incident alleging bias on part of the State authorities currently investigating the matter. Having stated that the Maharashtra Government in its counter affidavit has contended that these pleas should not be taken up by the Top Court, Lohia argued that the "Sadhus were virtually handed over to the mob. It was a massacre!"

Appearing for another petitioner seeking investigation to be taken out of the hands of the State, advocate Subhash Jha echoed Lohia's concerns regarding the intent of the State in securing the priests and bringing the perpetrators to justice.

…The question is do they not want to route out this issue and strike it off? Maharashtra is a land of Sadhus! They were literally handed over to the Mob by the police itself", argued Jha.

Jha thus went on to urge that relevant portions of the chargesheet must be brought before the Court. "I also suggest they file an affidvait regarding what investigation is being done in the matter", he added.

Solicitor General Tushar Mehta weighed in at this point to clarify that the present case was to consider whether the police was complicit in the incident, and given that the chargesheet documents are rather voluminous, the documents may be streamlined and placed before the Court.

"Media reports suggest that the Chargesheets go into more than 10,000 pages. Whether there is any policemen involved in the offence or whether there was dereliction of duty, calling for disciplinary action is what has to be considered", remarked Mehta.

Upon being questioned by Justice Bhushan about the progress in the matter, Advocate Rahul Chitnis, representing the State, informed Court that two chargesheets had already been filed while a third one will be filed on Monday.

Advocate Subhash Jha again expressed his concern regarding the safety of Sadhus and urged that unless the Central Government looks into the matter, priests would continue to be killed in Maharashtra.

Petitioner in person, Advocate Shashank Shekhar Jha also expressed his grievance and highlighted that "the incident took place in April. Now it's August and no action has been taken against any policemen."

Taking the suggestions of all parties involved, Justice Bhushan decided to call for the details of the inquiry, along with the charge sheets filed in the matter, to be placed before him and posted the matter for hearing after 3 weeks.