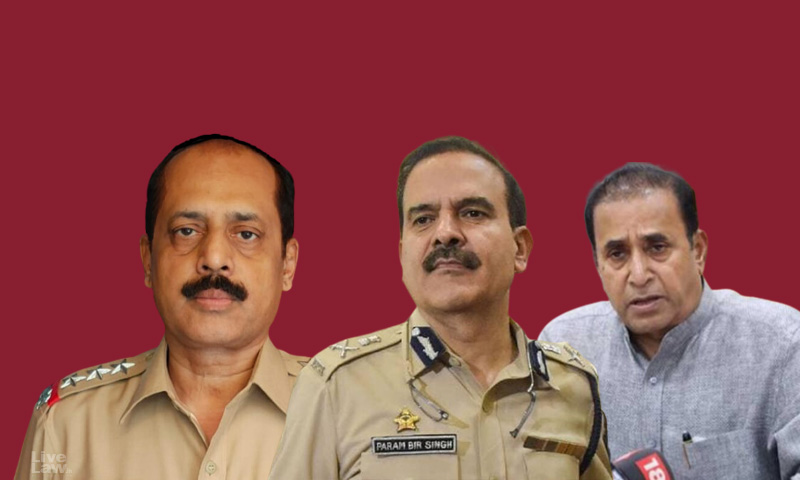 Ex- Mumbai Police Commissioner Param Bir Singh's lawyer told an inquiry commission on Tuesday that his corruption allegations against the then Home Minister Anil Deshmukh were based on "hearsay" material and therefore even if he deposed as a witness it would have "no value." Advocate Abhinav Chandrachud, representing Param Bir Singh, made this submission before the one-member commission...

Ex- Mumbai Police Commissioner Param Bir Singh's lawyer told an inquiry commission on Tuesday that his corruption allegations against the then Home Minister Anil Deshmukh were based on "hearsay" material and therefore even if he deposed as a witness it would have "no value."

Advocate Abhinav Chandrachud, representing Param Bir Singh, made this submission before the one-member commission of Justice (retd) KU Chandiwal's constituted by the Maharashtra Government to inquire into the veracity of Singh's corruption allegations against Deshmukh.

"….the information given to him was provided by some officers... he has no first-hand information of what transpired. His information in that sense is hearsay. Even if he were to step into the witness box it would have no value in law because it would be what someone else told him. Therefore, he has nothing to depose," Advocate Chandrachud said.

He reiterated that Singh did not wish to be examined as a witness but assured the commission that his client would file an affidavit in the coming week and wouldn't deviate from his letter.

"It will say nothing more than what has already been said.."

In his March 2020 letter to the Chief Minister, Singh alleged that Deshmukh had asked dismissed cop Sachin Waze and two other officers to illegally collect Rs 100 crore from bar owners every month for him. Deshmukh is in prison pursuant to several investigations initiated pursuant to Singh's letter.

Following the letter, the Maharashtra government formed the one-member commission to probe Singh's allegations against Deshmukh. Despite the commission issuing multiple summons and a bailable warrant against Singh. He has not appeared before it so far.

Thrice the commission had imposed fines on Singh – of Rs 5,000 in June and Rs 25,000 each on two other occasions – for failing to appear before it. In November, Singh had filed an affidavit before the Commission saying that he does not wish to depose before it.

It is only on Monday, that Singh informed the commission through Advocate Chandrachud about his willingness to file an affidavit.

On Tuesday, Chandrachud argued in response to an application filed by Sachin Waze to defer his own cross examination before Justice Chandiwal till Param Bir Singh stepped into the witness box or filed his affidavit.

Advocates Yogesh Naidu and Rounak Naik for Waze said that Singh's letter that had triggered setting up of the commission of inquiry and Waze was only an "incidental factor." Therefore, either Singh should depose or place his affidavit on record before Waze was asked to testify.

"The trigger of the whole issue has now come forward. We are here to being an end to the object of the enquiry commission. First let him come forward….Param Bir should have first stepped into the box. Read the teams of reference of the commission. We agreed to be cross examined because he was not there… We participated in the process", Waze's lawyers argued.

Waze's lawyers submitted that new facts may come before the commission in Singh's affidavit.

Chandrachud responded, "I believe his apprehension is that today his client is going to step into the witness box and tomorrow my client will say something entirely different…The affidavit will take a week. It will say nothing more than what has already been said.."

Retired Justice KU Chandiwal, heading the high-level judicial inquiry into the veracity of Singh's corruption allegations then rejected Waze's applications and proceeded with his cross examination.

Justice Chandiwal then recorded in his order the submission made by Chandrachud that whatever information received by Singh, which is reflected in the communication dated March 20, 2021 addressed to Chief Minister, was based on hearsay source. In this backdrop, the Commission noted that there was no hurdle in proceeding with Waze's cross-examination.

The commission clarified that Waze would be at liberty to cross-examine Singh if the latter made contradictory or disparaging statements.

Advocate Naidu still urged the commission not to proceed with Waze's cross-examination.

He contended that since the commission has recorded that contents of Param Bir Singh's letter are "hearsay," the inquiry need not even proceed further.

However, the commission went on to examine Waze.

In his cross-examination by Deshmukh's close aide Sanjeev Palande's lawyer Shekhar Jagtap, Waze said that he met Param Bir Singh on a number of occasions before his re-instatement in the Mumbai Police force on June 10,2020. He claimed to assist several agencies while he was suspended between 2003- 2020.

Waze said that during the period of his suspension he applied for reinstatement on then Home Minister Anil Deshmukh's behest.

His cross examination will continue tomorrow.

Param Bir Singh was declared as an absconder by a Mumbai Court recently in connection with an extortion case. Yesterday, the Supreme Court granted him protection from arrest by Mumbai police but asked him to join investigation.