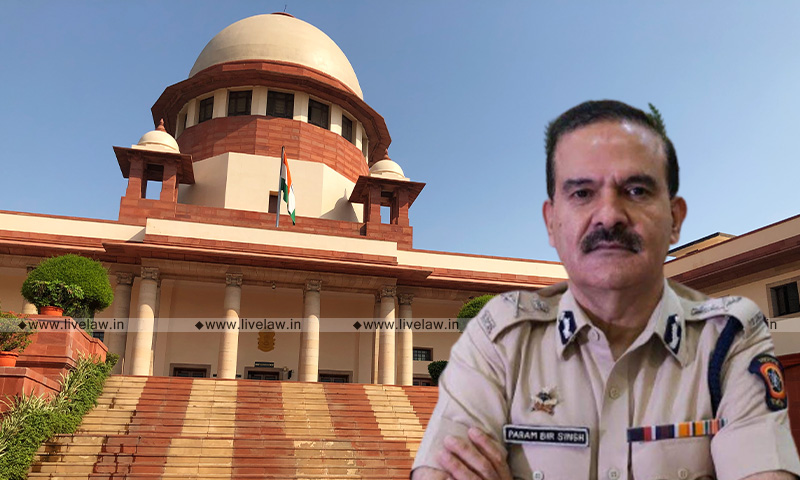 The Maharashtra Government has told the Supreme Court that the former Mumbai Police Commissioner Param Bir Singh, who was recently suspended from the Mumbai police over allegations of misconduct, is indirectly trying to seek a stay on the criminal investigations pending against him through his Special Leave Petition, which is essentially filed against the preliminary enquiry as part...

The Maharashtra Government has told the Supreme Court that the former Mumbai Police Commissioner Param Bir Singh, who was recently suspended from the Mumbai police over allegations of misconduct, is indirectly trying to seek a stay on the criminal investigations pending against him through his Special Leave Petition, which is essentially filed against the preliminary enquiry as part of departmental proceedings.

The State Government has said that Singh should approach the Central Administrative Tribunal to challenge the departmental enquiry and has added that the Bombay High Court correctly dismissed his writ petition on the grounds of non-maintainability and availability of alternate remedies.

"The validity of the order dated April 1 and April 20 including the alleged malafides in issuance of the said order clearly fall within the ambit of "service matters", which can be agitated before and adjudicated by the CAT vested with wide powers under the CAT Act, 1985," says affidavit of the State Government.

The petition was filed against the September 16 judgment of the Bombay High Court which dismissed as not maintainable the petitions filed by him challenging the two inquiries ordered by the State Home Ministry for allegedly violating service rules and corruption charges.

On November 22, a bench led by Justice Sanjay Kishan Kaul had granted interim protection from arrest to Param Bir Singh on condition that he should join the Mumbai Police investigation.

The Maharashtra Government argues in its counter-affidavit that under the guise of challenging a departmental enquiry, Singh is in effect seeking stay of criminal investigation against him.

In this regard, the State has submitted that the Supreme Court had earlier refused to entertain the challenge against the orders dated April 1 and April 20, which are being challenged in the present SLP. However, Singh has suppressed this fact in the SLP, argues the state. On June 11, the Supreme Court had dismissed as withdrawn Singh's writ petition which sought for transfer of the cases pending against him to the CBI. The orders dated April 1 and April 20 were also the subject matter of that writ petition, says the Maharashtra Government.

"The same were also challenged before the High Court in which the impugned order dated September 16 has been passed," affidavit states.

The State has also stated that the Top Court on March 24 while dismissing Parambir Singh's petition seeking transfer of investigation did not preclude the State from issuing orders directing initiation of a preliminary enquiry into violations of the All India Service (Conduct) Rules, 1968 that may have been committed by the Petitioner.

Parambir Singh Cannot Be Considered To Be Whistleblower

The Maharashtra Government has submitted that from Singh's letter dated March 20, 2021 containing allegations against the then Home Minister was issued three days after he was transferred, as a counter-blast to him being transferred.

SLP Infructuous In View Of Summons Issued By CBI On September 18, 2021 To Sanjay Pande

To further substantiate the contention that the SLP is infructuous, the State has stated that the summons issued by the Investigating Officer of CBI to Sanjay Pande on September 18, it is evident that the CBI is investigating the conversations that took place between Parambir Singh and Sanjay Pande.

"Government has accorded approval to initiate the disciplinary proceedings against Shri Param Bir Singh under section 8 of the All India Services (Discipline and Appeal) Rules, 1969. The statement of articles of charge framed against Shri Param Bir Singh along with the statement of imputations of misconduct or misbehavior and a list of documents and witnesses are issued," affidavit states.

State Government in the affidavit has further stated that the SLP has been verified by Singh's Constituent Attorney and not by him personally though he is alleged to be present in India.

In this regards it has also been stated that, "Contrary to what has been stated in the verification of the Special Leave Petition it is denied that the Constituted Attorney has personal knowledge of (a) what transpired at the purported personal meeting between the Petitioner and Respondent No. 3 on 15th April 2021, and (b) the purported transcript of the recorded conversation submitted by the Petitioner to Respondent No. 2."

The affidavit has been drawn by Advocate Rahul Chitnis and has been filed through Advocate Sachin Patil.