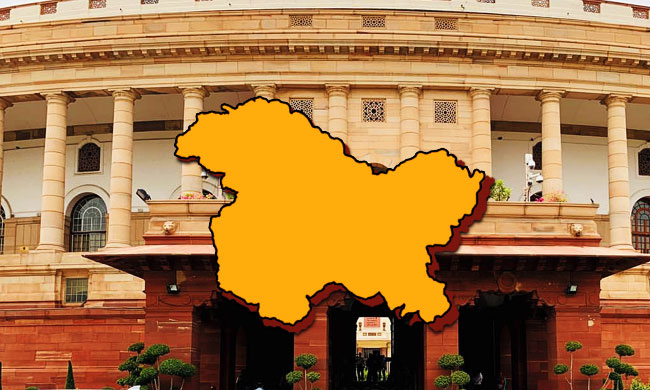 The Rajya Sabha had cleared the Bill yesterday with 125 : 61 votes.

As per the Bill, Jammu and Kashmir will be divided into Union Territories of Jammu & Kashmir and Ladakh.

The Bill provides for a 107-member legislative assembly for J&K, which can make laws on any matter specified in the State list of the Seventh Schedule, except 'police' and 'public order', and any matter in the concurrent list applicable to UTs.

The Bill also repeals 153 state laws passed by J&K and contains a schedule of 106 central laws which will be made applicable to the UTs of J&K and Ladakh.

Along with the Bill, Union Home Minister Amit Shah tabled a statutory resolution to revoke Article 370 of the Constitution of India.

The Bill and the resolution will ensure that J&K remains as integral part of India forever, Shah said.

Congress's Adhir Ranjan Choudhury and Manish Tiwari accused the government of violating all constitutional norms by converting a State into a Union Territory without the concurrence of the elected representatives of the region.

DMK leader Dayanidhi Maran highlighted the absence of National Conference leader Farookh Abdullah in the house. He said that Abdullah has been wrongfully arrested and kept away from attending the house.

Trinamool Congress walked out of the house session saying that they cannot support the Bill.

Dr Shashi Tharoor termed the decision to scrap Article 370 as legislative authoritarianism. "It betrays the spirit of the Constitution," he said, adding that in the name of unity, the government are promoting division, in the name of prosperity, it is are promoting poverty.

BJP MP from Ladakh Jamyang Tsering Namgyal, supporting the Bill, said that due to special status of J&K, developmental needs of Ladakh were neglected.

Asaduddin Owaisi from AIMIM said that the Centre's move was only to appease the vote bank and had no constitutional basis.

Responding to the opposition, Amit Shah said that the move was necessary to correct a 'historic mistake'.

"Those who support Article 370 are anti-Dalit, anti-tribal, anti-women and anti-education.", he said.