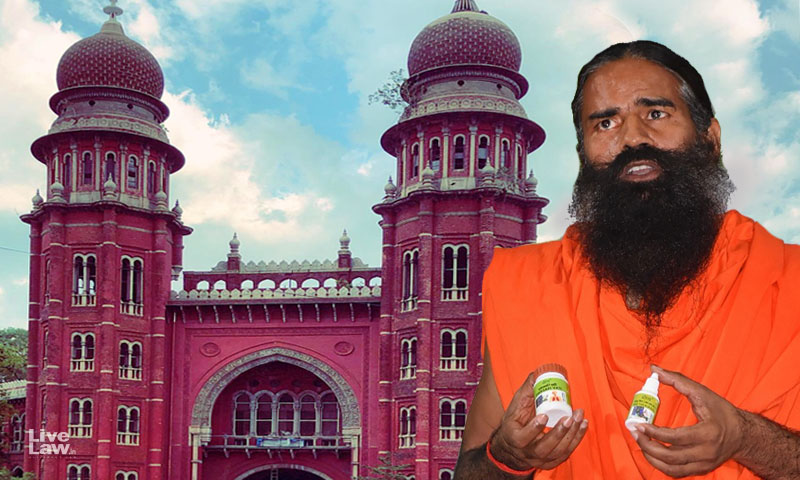 "It must be kept in mind, that there is no cure for Coronavirus anywhere in the world as on date. People are dying. In these tragic times, the defendants seek to make money, money, money. They seek to exploit the fear among the people by projecting that they could cure Coronavirus. There is no cause much less due cause, and much less just cause to permit the defendants from using the...

"It must be kept in mind, that there is no cure for Coronavirus anywhere in the world as on date. People are dying. In these tragic times, the defendants seek to make money, money, money. They seek to exploit the fear among the people by projecting that they could cure Coronavirus. There is no cause much less due cause, and much less just cause to permit the defendants from using the word 'Coronil'."

In a huge set back to Baba Ramdev's Patanjali Ayurved, the Madras High Court on Thursday passed an absolute injunction order, restraining it from using the trademark 'Coronil'.

The single-Bench of Justice CV Karthikeyan has made his previous order, temporarily restraining the company from using the trademark, absolute after finding a prima facie case in favour of a Chennai based private company Arudra Engineering (Plaintiff), claiming rights over the mark.

"In the instant case, the defendants have directly infringed upon the very word 'Coronil' used by the plaintiff. As stated above, there is no evidence that it is a cure for Coronavirus. Then most certainly coinage of the term 'Coronil' by the defendants is without due cause and in fact that intention to mislead the general public. They can always market the products, but they should be honest and declare that it is not a direct cure for Coronavirus, but rather an immunity booster. Usage of the word 'Coronil' and usage of the common pictorial image of Coronavirus are to put it very mildly, misleading and cannot be permitted and is therefore prohibited," Justice Karthikeyan held in an order running over a hundred pages.

The Court has also imposed a cost of Rs. 5,00,000/-, to be paid jointly by Pathanjali Ayurved Limited and Divya Yog Mandir Trust (Defendants), to the Dean, Adyar Cancer Institute and further Rs.5,00,000/- to be paid to the Dean, Government Yoga and Naturopathy Medical College & Hospital, Arumbakkam.

The stern view was taken by the Court after it noted that the companies "invited this litigation on themselves" in pursuit of further profits.

"The defendants have invited this litigation on themselves. A simple check with the Trade Marks Registry would have revealed that 'Coronil' is a registered trademark. If they had, and had still, with audacity used the name 'Coronil', then they deserve no consideration at all. They cannot assume they can bulldoze their way and infringe a registered trademark. They must realise there is no equity in trade and commerce. If they had not done a check with the Registry, then they are at fault. They cannot plead ignorance and innocence and seek indulgence from this Court. Either way, indulgence is refused," the bench admonished the defendants.

Last month, the High Court had restrained Patanjali Ayurveda from using the trademark 'Coronil'- the controversial drug that the company initially claimed to be a cure for the deadly Corona virus.

The injunction order was passed after the plaintiff company contended that 'CORONIL-92 B' was its registered trademark since 1993 for "Acid inhibitor for industrial cleaning" used as chemical preparations in industries.

Senior Advocate PR Raman appearing for the plaintiff had submitted that protection has to be granted whenever a registered trademark is infringed by a person who is not a registered proprietor and uses in the course of his trade a mark identical to the trademark already registered, irrespective of the fact, whether the business is similar or not, under Section 29(4)(b) of the Trademarks Act, 1999.

Accordingly, the single Judge had granted temporary injunction in favour of the Plaintiff-company till July 30, 2020.

While hearing the defendants' pleas for the vacation of this injunction order, the High Court pulled up the defendants for "exploiting" the fear and panic among the general public by projecting a cure for the Coronavirus.

"'Coronil Tablet' is not a cure but rather an immunity booster for cough, cold and fever. The defendants must realize that there are organisations which are helping the people in this critical period without seeking recognition and it would only be appropriate that they are made to pay costs to them," the bench observed.

Coming to the legal aspect of the matter, the Court held that under Section 29(4) of the Trade Marks Act, 1999, protection is granted even when the offending mark is used for a different class of goods.

This was after Patanjali Ayurveda strongly contended that there is no similarity between the Coronil tablet sold by Divya Pharmacy and the chemical products sold by the plaintiff.

"The only pre-condition is that the plaintiff's mark should have a "reputation in India".

… The plaintiff has established a prima facie reputation in India among the heavy industries where chemical agents are used to treat and prevent corrosion. They have also established reputation in industries overseas also," the bench held while granting relief to the Plaintiff.

Another argument raised by the defendant-companies was that the Plaintiff has not registered their trademark in parts, but as a whole; they have not registered the word 'Coronil' independently, though they could have, under the provisions of the Act.

Rejecting this argument, the bench held that the "prominent name" under which the Plaintiff markets his products is Coronil.

"It is a trademark for the product 'Coronil'. The suffixes is 92B and 213 SLP independently convey no meaning at all. The only word which conveys some meaning directly relating to the business of the plaintiff is the word 'Coronil'. Naturally, the plaintiff has come to Court to protect that distinctive name, which they have coined namely, a product to erode corrosion leading to a state of 'Coro-Nil' or rather 'Corrosion – Nil'. It signifies, the quality of their product," the bench explained.

It went on to observe that the Plaintiff had a "due cause" to use the trademark Coronil, which is short for 'Corrosion + Nil'. However, since the position o Patanjali's Coronil tablet being a Covid cure was not established, the company did not have a "due cause".

…The defendants have not shown due cause in naming their product as 'Coronil', since there is no direct material produced to show that it is a treatment for Coronavirus and even the reports in this connection, projecting such a cure have been adversely noted by the Ministry of Ayush, New Delhi," the order states.

"In the instant case, I hold that the primary word relied on by both the plaintiff and defendants are 'Coronil'. The plaintiff uses it as ''Corrosion – Nil' and defendants used it for 'Coronavirus – Nil. Therefore, I hold, on a plain reading of the statute that a prima facie case has been made out by the plaintiff that once they have a prior registration of a trademark in which the primary word is 'Coronil', then protection has to be afforded to them from its infringement albeit for a different class of goods. It is not always obligatory that the whole or part must be registered as separate trademarks."

The reasons on law, as enumerated by the Court, to allow the Plaintiff's claim are as follows:

The Court has directed the Defendants to realize the costs by August 21, 2020 and file compliance before the Registrar by August 25, 2020.