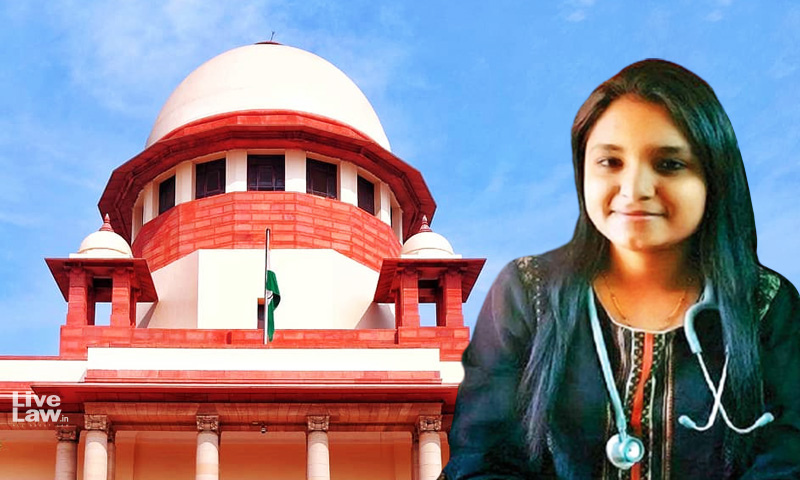 The Supreme Court on Thursday permitted the doctors accused of abetting the suicide of Dr.Payal Tadavi to re-enter the College and the Hospital to pursue their courses of study.

The three doctors, Dr. Ankita Kailash Khandelwal, Dr. Hema Suresh Ahuja and Dr. Bhakti Arvind Mehare are accused of abetting the suicide of Dr.Payal Tadavi by humiliating her and passing disparaging remarks about her caste. While granting conditional bail, the Bombay High Court had observed that they will not be allowed inside the BYL Nair hospital premises during the bail period.

"If the law presumes an accused to be innocent till his guilt is proved, the Appellants as presumably innocent persons, are entitled to all the fundamental rights including the right to liberty guaranteed under Article 21 of the Constitution and are entitled to pursue their course of study so long as exercise of said right does not hamper smooth conduct and progress of the prosecution.", the bench comprising Justices Uday Umesh Lalit, Vineet Saran and Ajay Rastogi observed while allowing their appeals.

Earlier, the Court had sought the view of Medical Council of India about allowing them to migrate to any other college/institution. The MCI submitted before the court that the students who register themselves for Post Graduate medical courses, have to be under a particular Guide and complete the entire course under the supervision of that Guide alone. Therefore, "under no circumstances migration is permissible" for students undergoing Post Graduate medical courses, the Court was told.

The bench also noted that an Order of Suspension passed against these doctors. Rejecting the contention raised on behalf of the complainant that, in a matter arising from the request for relaxation of condition, no collateral attack on the Suspension Order be permitted, the bench observed:

"While balancing the competing claims, in our view, the Appellants must be allowed to go back to their courses of study otherwise the pendency of prosecution against them will add further penalty in the form of prejudicing their career. Any such adverse impact will negate their rights under Article 21 of the Constitution."

The bench has also imposed the following conditions

i) The Appellants shall not, in any manner, influence or even attempt to influence any of the witnesses.

ii) The Appellants shall present themselves on each of the dates that the matter gets posted before the Trial Court, unless their presence is specifically exempted.

iv) The Appellants shall avail study leave, as suggested by Mr. Sidharth Luthra, learned Senior Advocate, so that their actual period of stay inside the College and the Hospital gets reduced to the maximum possible level

v) If there be any holiday or vacation and it is permissible for the residents to be outside the College and the Hospital, the Appellants shall avail that and keep themselves away from the Hospital and the College.

vi) If there be any untoward incident as apprehended by Dr. Ganesh Shinde, Head of Department, or even likelihood of such incident, the concerned authorities shall immediately report to the Police Station of the area and ensure that the life and liberty of everyone including the Appellants are well protected."