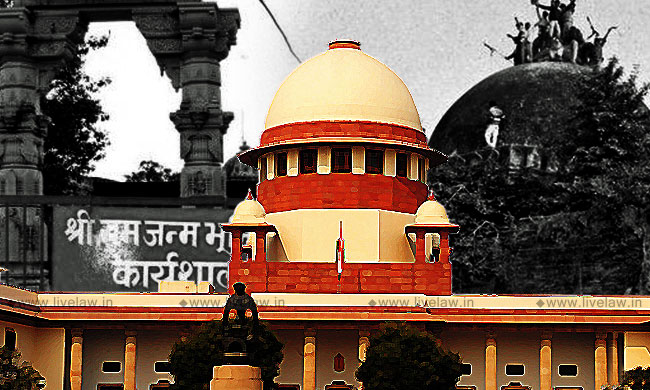 Dr. Mohammad Ayub of the Peace Party has moved the Supreme Court against its order dated November 9, 2019, in the Ayodhya land title dispute case. After a review of the order was dismissed by a five judges bench comprising Chief Justice SA Bobde, Justices D Y Chandrachud, Ashok Bhushan, Abdul Nazeer and Sanjiv Khanna, Dr. Ayub has moved a Curative Petition, alleging that the Nov...

Dr. Mohammad Ayub of the Peace Party has moved the Supreme Court against its order dated November 9, 2019, in the Ayodhya land title dispute case.

After a review of the order was dismissed by a five judges bench comprising Chief Justice SA Bobde, Justices D Y Chandrachud, Ashok Bhushan, Abdul Nazeer and Sanjiv Khanna, Dr. Ayub has moved a Curative Petition, alleging that the Nov 9 judgment relies upon patent errors and creates rights based on illegal acts which is incorrigible in light of settled law.

He proposed that even though the original suitor, Sunni Central Board of Waqfs had not preferred a review properly, he himself was entitled to approach the court as the said suit was filed in a representative capacity for the entire Muslim Community.

The main grounds raised in the plea are as follows:

The plea contends that a claim to possessory title must be based on "exclusive" and "unimpeded" possession of the land. However, he said, the Hindu parties had failed to establish the same by evidence.

He explained that since Muslims admittedly had access to the inner courtyard, which could be accessed only via outer courtyard, landed to the logical conclusion that the Hindus were not in "exclusive" possession of the outer courtyard.

ASI Report Does Not Support The Hindu Party's Case

The Petitioner has argued that the ASI report is a mere opinion which reported existence of certain remains under the Mosque's structure, however, the same did not unequivocally establish that the remains belonged to a Hindu Temple. In fact, there were possible linkages of Buddhist or Jain traditions and the report even suggested a confluence of civilizations, cultures and traditions, including some of the fragments belonging to an Islamic structure.

Thus it is contended that mere existence of a structure, allegedly a Hindu temple, underneath the disputed property cannot lead to a legally enforceable claim to title by the Hindu parties. The Petitioner went on to state that even assuming that the underlying structure was in fact a Hindu temple which vested title to the disputed site in the original Plaintiff, it must be noted that the Hindu parties did not lead any evidence to even establish that upon the change in legal regime to the Mughal sovereign, such rights were recognized.

"The ASI report does not conclude that the remnants of the preexisting structure were used for the purpose of constructing the mosque (apart, that is, from the construction of the mosque on the foundation of the erstwhile structure)," the plea read.

The Petitioner further submitted that the ASI report dates the underlying structure to the 12th century, meaning that there is a time gap of about four centuries between the date of the underlying structure and the construction of the mosque. Notably, no evidence is available to explain what transpired in the course of the intervening period of nearly four centuries and hence it is not justified to draw an inference in favour of the Hindu parties.

Mosque Was Not Built On Remains Of Temple

The plea then asserts that the Supreme Court had upheld the Muslim party's denial of the allegation that their existed any temple at the site of Babri Masjid or that the mosque was constructed after destroying it.

Thus, it has been contended that the basis for the assertions made by the original Plaintiff have been negative and it leaves no premise to give them any relief.

No Right Of Action Can Have Its Origin In Fraud

The Petitioner has resorted to the legal maxim Ex dolomalo non orituractio, meaning 'no right of action can have its origin in fraud' to state that,

"No right (possession, ownership, prayer) can be claimed if it was founded on an illegality in which the claimant was or was not complicit."

The trespass of 1949 was pre-meditated, pre-planned to desecrate the mosque, which has been accepted by this Court. However, the judgment while recognizing the illegality of these acts, fails to consider the consequences of the illegal ouster, and hence, the judgment must be reviewed," he submitted.

"No Court will lend its aid to a man who founds his cause of action upon an immoral or an illegal act."

Evidence Of Worship Prior To 1860

The Petitioner has asserted that if a mosque existed at the site for 450 years, then it can be reasonably presumed that it was being used for worship by the Muslims. Reliance was placed on Section 114 of the Indian Evidence Act, 1872 which stipulates that Court may presume existence of certain facts.

He submitted that the mosque has always been used as a mosque since its construction during the regime of Babur, and the travelogues upon which the Original plaintiffs had relied also noticed the same. Therefore, he asserted, t cannot be said there is no evidence prior to 1860 of worship by the Muslims at the mosque.

The petition is drawn by Advocate Abhinav Shrivastava.