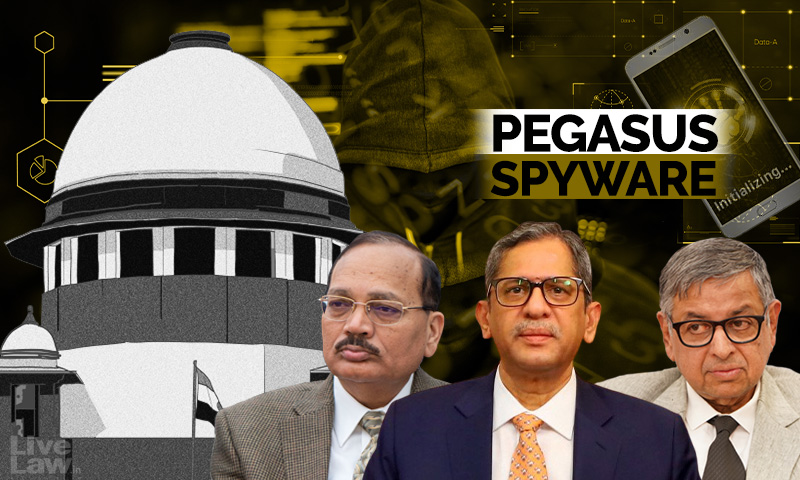 The Supreme Court on Tuesday issued notice before admission to the Central Government in a batch of petitions seeking probe into the Pegasus snooping controversy.A bench comprising the Chief Justice of India NV Ramana, Justice Surya Kant and Aniruddha Bose posted after 10 days the petitions seeking court-monitored inquiry by a Special Investigation Team or a judicial probe into reports of...

The Supreme Court on Tuesday issued notice before admission to the Central Government in a batch of petitions seeking probe into the Pegasus snooping controversy.

A bench comprising the Chief Justice of India NV Ramana, Justice Surya Kant and Aniruddha Bose posted after 10 days the petitions seeking court-monitored inquiry by a Special Investigation Team or a judicial probe into reports of alleged snooping of activists, politicians, journalists and constitutional bodies using the Pegasus spyware.

The Central Government on Tuesday told the Supreme Court that it does not want to file any additional affidavit in the Pegasus issue, as national security aspects are involved. The Centre added that it is willing to place the details before the expert committee proposed to be constituted by it to examine the issues.

Yesterday, the Supreme Court had adjourned the hearing to today to ascertain if the Union Government wanted to file an additional affidavit in the matter. This was after the petitioners highlighted that the "limited affidavit" filed by the Centre has evaded the question whether Government or its agencies have ever used Pegasus.

Today, the Solicitor General of India Tushar Mehta told the Court that the affidavit already filed by the Centre in the case is "sufficient" and a further affidavit is uncalled for. The Solicitor said that if the Government is disclosing in public that it is not using a particular interception software, the terrorist organizations will take advantage of that information to change their communication settings. He said that such matters cannot be placed in an affidavit and be made a matter of "public debate". At the same time, the Solicitor added that the Government will place all the details before the proposed technical committee, which he assured, will consist only of neutral officers.

"In my respectful submission, whatever we submitted in the last affidavit covers the case. The affidavit I filed is sufficient. I will explain why. I am before the highest constitutional court of this country. Mr Sibal very rightly pointed out yesterday that there is a statutory scheme and rules for allowing interception. These are all necessary to address national security, combat terrorism. The petitioners want the government of divulge which software was not used. If that happens, those who are likely to be intercepted for terrorist activities etc, they may take preemptive or corrective steps. We don't' have anything to hide. Which software is used or which software is not used -these are national security issues. This cannot be a matter of affidavit and public debate", the SG said.

To drive home his point, the SG gave a hypothetical example :

"Kindly visualize a situation. Tomorrow if some narrative is used that military equipment is used for illegal purposes. Web portals can build such a narrative. Somebody can file a petition. If I advice the government to file an affidavit regarding the use of the military equipment, I will be failing in my duty".

The bench said that it does not want to compel the Government to disclose any information or to compromise national security. The bench orally said it only wants information regarding authorization for alleged interception of the phones of civilians.

"We as a court do not want to compromise with security of this country or defence of nation. Here the issue is different, there are people alleging hacking of their phones. In case of civilians also rules permit(interception), but only on permission by competent authority. What is the problem if that competent authority files an affidavit before us? We don't want you to say anything related to national security! What can be done is, We will issue a simple notice, let competent authority under rules take decision to what extent information is to be disclosed and we'll see what is to be done", the bench told the SG.

In response, the SG said :

Senior Advocate Kapil Sibal said that the the petitioners are not seeking for any national security related information and wanted only to know if the Government has authorized interception using Pegasus.

"We don't want them to give any information as to security of the State. They must reply if Pegasus as a technology was used", Sibal submitted.

At this point, the judges had a brief discussion amongst themselves. After that, the bench said that it is issuing notice before admission to the Government.

"We had thought a comprehensive reply will come but it was a limited reply. We will see, we will also think and consider what can be done. We will discuss what needs to be done, if committee of experts needs to be made, or some other committee", the Chief Justice of India said.

The bench issued notice before admission to the Union Government.

Manohar Lal Sharma and Other Vs Union of India