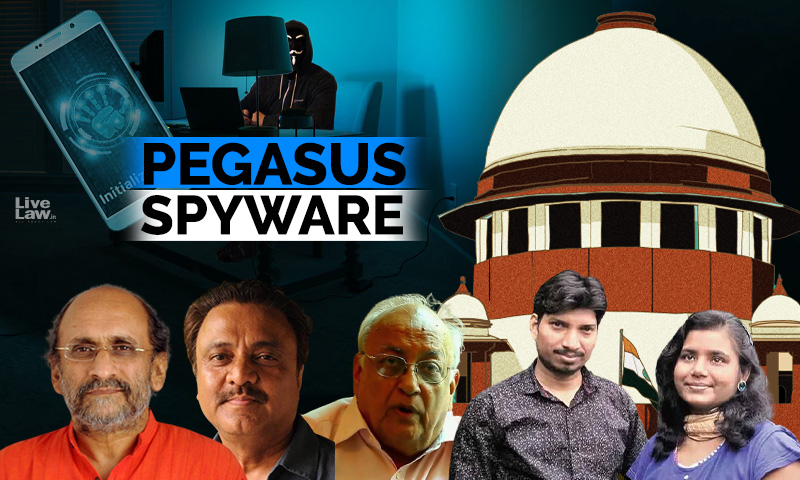 In a significant development in the Pegasus spyware controversy, five journalists who are reported to be in the potential list of snoop targets have filed writ petitions in the Supreme Court contending that the unauthorized use of surveillance by government agencies have violated their fundamental rights guaranteed under the Constitution.This is the first instance of persons approaching the...

In a significant development in the Pegasus spyware controversy, five journalists who are reported to be in the potential list of snoop targets have filed writ petitions in the Supreme Court contending that the unauthorized use of surveillance by government agencies have violated their fundamental rights guaranteed under the Constitution.

This is the first instance of persons approaching the Court claiming to be directly affected and personally aggrieved by the alleged hacking of their mobile phones using Pegasus spyware.

Already, three writ petitions have been filed in the Supreme Court seeking a court-monitored probe into the Pegasus issue. On August 5, a bench headed by the Chief Justice of India is slated to hear the PIL filed by veteran journalists N Ram and Sashi Kumar seeking a judicial probe into the controversy.

While those petitions have been filed by third parties in public interest, the present petitions are filed by personally aggrieved parties. The petitioners argue that the unauthorized surveillance through such sophisticated software will create a "chilling effect" on the fundamental right to free speech, constitute a blatant violation of fundamental right to privacy and will deter informants and whistleblowers from coming forward and bringing to light wrongdoing at various levels of government and as such  have a detrimental effect on transparency in governance all across India.

The petitions highlight that on July 29, 2021, France's national cybersecurity agency,  ANSSI confirmed the presence of Pegasus spyware on the phones of two journalists from the country's online  investigative journal Mediapart, becoming the first official government agency to confirm the cyber-attacks using Pegasus. However, the Government of India is yet to acknowledge the problem and announce a probe into it.

"While the Petitioner has no idea who is behind the Pegasus malware infection on his phone- the aforesaid stance taken by senior government functionaries has meant that the Petitioner is left in a position where his most basic fundamental rights, i.e. his right to life, his right to privacy and his right to free speech have clearly been curtailed in a completely illegal manner and far from investigating how this happened, the very Government that is meant to protect these rights refuses to issue a categorical statement to the effect that that the Union of India and/or its agencies have never purchased/licensed the Pegasus malware or even that they have never used it against journalists, advocates and human rights activists in India", the petition states explaining why the petitioners are constrained to knock the doors of the Court.

(i) Declare that the installation and/or use of malware or  spyware such as Pegasus is illegal and unconstitutional and is ultra vires Part III of the Constitution;

(ii) Issue a direction, order or writ, including writ in the nature of mandamus directing the Respondents to produce and disclose to this Hon'ble Court and the Petitioner all materials and documents with respect to all investigation, authorisation, and/or order(s) pertaining to the use of Pegasus on the Petitioner;

(iii) Issue a direction, order or writ, including writ in the nature of mandamus directing the Respondents to take suitable  steps to protect Indian citizens from the use of cyberweapons/malware such as Pegasus;

(iv) Issue a direction, order or writ, including writ in the nature of mandamus directing the Respondents to put in place a judicial oversight mechanism to deal with any complaints on illegal breaches of privacy and hacking and punish all government officials responsible for such breaches; and

(v)Pass such other and further order or order as may be deemed fit and proper in the interest of justice.