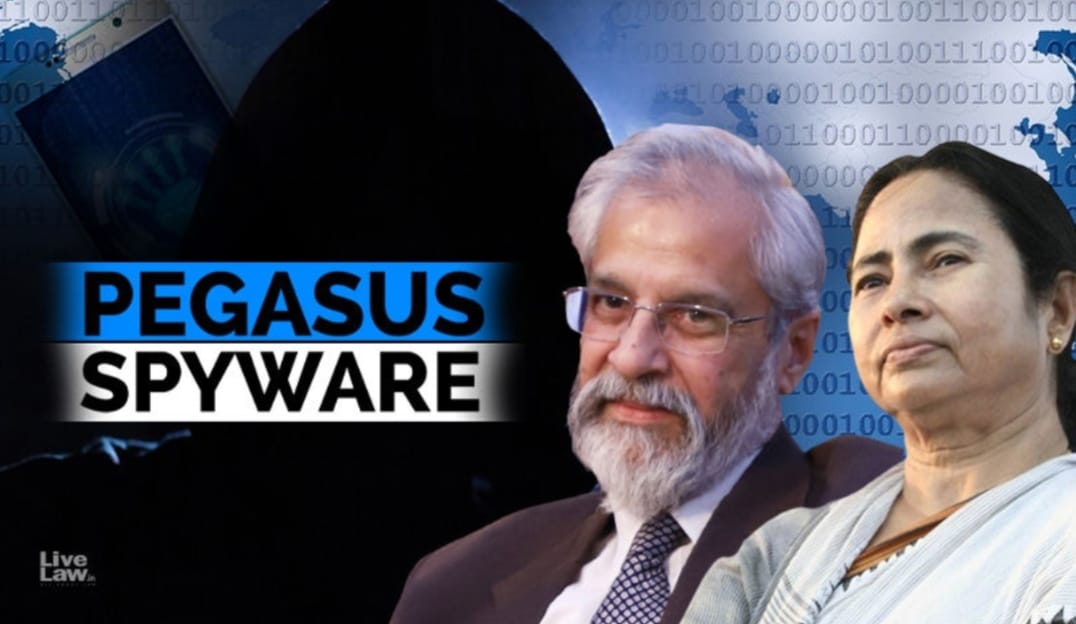 The Supreme Court on Wednesday turned down a plea to stay the notification issued by West Bengal Government constituting an Enquiry Commission headed by former Supreme Court judge Justice Madan B Lokur to investigate into the allegations pertaining to the Pegasus spyware scandal.A Bench comprising Chief Justice of India NV Ramana, Justice Surya Kant And Justice Aniruddha Bose however...

The Supreme Court on Wednesday turned down a plea to stay the notification issued by West Bengal Government constituting an Enquiry Commission headed by former Supreme Court judge Justice Madan B Lokur to investigate into the allegations pertaining to the Pegasus spyware scandal.

A Bench comprising Chief Justice of India NV Ramana, Justice Surya Kant And Justice Aniruddha Bose however issued notice on the writ petition and sought the response of all the respondents including, the Union of India, Ministry of Information and Broadcasting, Ministry of Electronics and Information Technology and the State of West Bengal.

While directing the matter to be listed on August 25th along with the other pleas seeking probe into Pegasus issue, the Bench has asked the petitioner, Global Village Foundation Public Trust to serve a copy to the Respondents.

Referring to Section 2A of the Commission of Inquiry Act, Advocate Saurabh Mishra appearing for the petitioner submitted that the notification is being challenged primarily on grounds of lack of jurisdiction

"There's some inconsistency in your affidavit. You say you want an inquiry, then you say the committee is unconstitutional. In an affidavit, you must be consistent." the bench remarked.

Solicitor General Tushar Mehta opined that the notification is unconstitutional and submitted that he would be assisting the Court on the constitutional aspect.

"It is unconstitutional is all I can say", the top law officer representing the Union Government said.

The Bench suggested that the present case be listed with the other writ petitions seeking an inquiry into the Pegasus spyware.

" We will keep along with other Writ Petitions, by then if they want to file counter they will file." the Bench said.

Advocate Mishra however insisted that an interim order be passed by the Court. He sought an interim relief in form of a stay on further proceedings of the Inquiry Committee. He added that public notice has been issued by the Commission and proceedings are taking place on day to day basis.

"That is only a preliminary exercise," the bench said turning down the interim prayer.

Mr Mishra argued that when the Supreme Court is seized for an enquiry committee pan India basis a state committee should not go on.

The development had come days after it was revealed that the Chief Minister's nephew and TMC MP Abhishek Banerjee was allegedly snooped on by the Pegasus spyware during the time of the West Bengal Assembly elections 2021.

News portal "The Wire" along with 16 other media organisations had recently uncovered a 'snoop list' that showed that activists, politicians, journalists, judges and several others were the potential targets of cyber-surveillance conducted through the Israeli firm NSO Group's Pegasus software. Over the past few days, The Wire has published several reports that suggest that the Pegasus spyware has been used illegally to keep tabs on dissidents and journalists.

The notification also expressed concerns regarding the alleged interference with the rights of journalists to discuss and report sensitive information and exercise their freedom of speech and expression. It was also opined that the alleged interception if found to be true would cause a complete demoralisation of the police force and other security services in West Bengal.

Some of the functions of the constituted Inquiry Commission are as follows:

The Supreme Court had yesterday issued notice to the Centre on a batch of petitions seeking probe into the Pegasus issue.