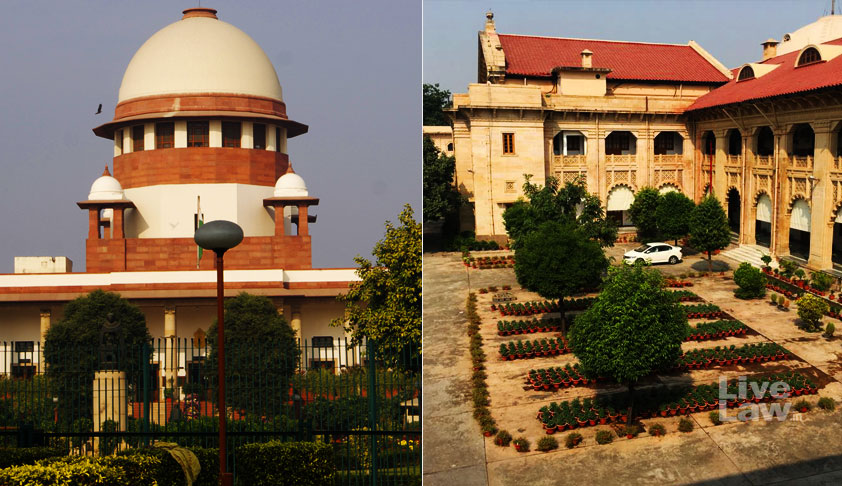 The Supreme Court today granted two weeks time to the State of Uttar Pradesh and Allahabad High Court to work on the agreed directions that are sought to be issued for laying down the broad parameters to be considered by the High Court while granting bail. While hearing a batch of pleas seeking bail in which the custody ranged from 9 to 15 years the bench of Justices SK Kaul and BR...

The Supreme Court today granted two weeks time to the State of Uttar Pradesh and Allahabad High Court to work on the agreed directions that are sought to be issued for laying down the broad parameters to be considered by the High Court while granting bail.

While hearing a batch of pleas seeking bail in which the custody ranged from 9 to 15 years the bench of Justices SK Kaul and BR Gavai also granted the High Court liberty to itself issue directions it felt appropriate in its wisdom to meet the exigencies of the situation.

"Counsel for the State of UP submits that in view of the suggestions, she will sit with the High Court to work out on the agreed directions that are sought to be issued. We make it clear that if the High Court in its wisdom feels appropriate it can itself issue directions to meet the exigencies of the situation. List after 2 weeks," bench noted in its order.

"We said let the State govt & the High Court give us elaborate suggestions. The Objective was you will give us suggested directions to what we asked. These are suggestions & counter suggestions. If you can't give us directions, we'll do something. I thought you people will work out in some directions. You've again submitted us a note running into 20 pages. This is not something that we want," Justice Kaul further said.

Upon Justice Kaul's remarks, Additional Advocate General, Garima Prashad sought time to coordinate with the High Court to work out on the agreed directions to which the Judge agreed.

The division bench of Justices SK Kaul and Hrishikesh Roy while considering the note submitted by Additional Advocate General, Garima Prasad with regards to the guidelines that could be adopted by the High Court to deal with the aspects in each case the court on August 25, 2021 had issued notice to the Allahabad High Court.

"Before giving our imprimatur to any suggestions/proposals, we find it appropriate that the High Court itself examines it and makes its own suggestions, as may be appropriate, Top Court had observed in its order.

Pursuant to issuance of notice, Allahabad High Court in its affidavit filed before the Supreme Court had submitted that in matters where criminal appeal has been pending for a long time before Allahabad High Court, a 'victim impact assessment report' detailing the physical, social and mental impact of the crime on the victim should be taken into account for serious and grave offences.

The High Court had also suggested for preparation of a victim impact assessment report in consultation with the victim in cases where the accused has served actual sentences or long tenure in jails to examine the impact of grant of bail on him.

Furthermore, the High Court had also submitted that in consonance with Supreme Court judgments, life sentence should be considered for "entire life" only and that if an accused of heinous crime is released on bail after spending 10 to 15 years in jail then "he will never make an effort for deciding his appeal early."

In the affidavit submitted the High Court had also stated for creation of special benches for deciding long pending criminal appeals to give the accused benefit of bail in a "mechanical manner".

Submission for evolution of a different yardstick had also been made for the grant of bail to accused in white collar or organized crimes due to them being habitual and hardened criminals who committed crimes in a planned and sophisticated manner.

Report of the suggestions submitted by the State of Uttar Pradesh

In compliance of Court's order dated July 26 calling the State to give suggestions, the State of Uttar Pradesh in its note had laid down two broad criterion that could be taken into consideration while considering bail plea:

The following suggestions were suggested within such category:

The Supreme Court on July 26, 2021, had taken the view that the long pendency of appeals at the Allahabad High Court must be decided on broad parameters framed by the Court and had suggested to consider the period undergone, the heinousness of the crime, the accused's age, the period taken in the trial, and whether the appellants are diligently prosecuting the appeals.

The Court had also called for suggestions for the instant 18 matters based on which it had to examine whether those cases should be remitted to the High Court for consideration or some obvious cases that can be dealt with at the very threshold.

It had also directed the High Court to assist AAG in formulating the note and suggestions following interaction between the Standing Counsel Vishnu Shankar Jain, the Registrar of the High Court and the AAG.