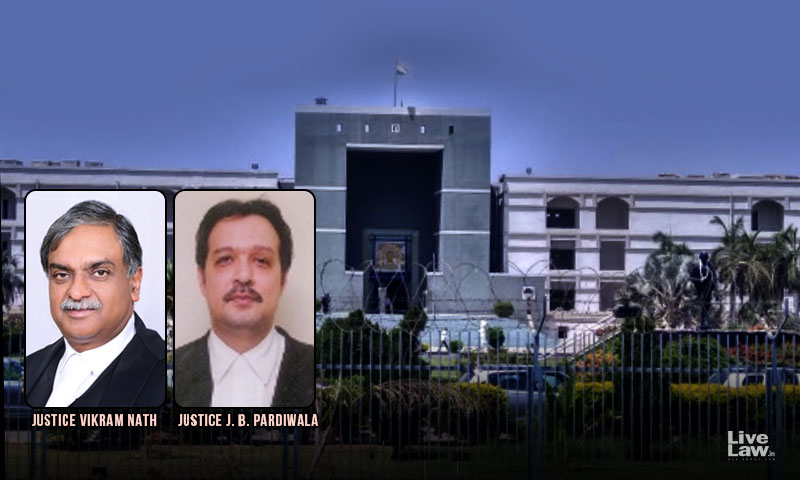 x
Community Service At COVID Care Centres A Must For Those Found Without Mask: Gujarat High Court

In a first, the Gujarat High Court on Wednesday (02nd December) directed the Gujarat government to come out with a policy or order, directing that all those caught not wearing face cover/mask shall be compulsorily sent to COVID-19 care centres for community service. The Bench of Chief Justice Vikram Nath & Justice J. B. Pardiwala issued the aforesaid direction after the...

In a first, the Gujarat High Court on Wednesday (02nd December) directed the Gujarat government to come out with a policy or order, directing that all those caught not wearing face cover/mask shall be compulsorily sent to COVID-19 care centres for community service.

The Bench of Chief Justice Vikram Nath & Justice J. B. Pardiwala issued the aforesaid direction after the State Government took a stand before the Court that it was not inclined to introduce community service for violators of social distancing norms and/or for those not wearing face cover/mask at the COVID Centres on non-medical positions.

The Bench, while noting in its order that "stand of the State is unfortunate considering that it is the State which is required to act in the most proactive manner in such times", remarked,

"The stand of the State has left us with no option but to issue certain directions, considering the gravity and enormity of the situation."

The Bench was hearing a PIL field by Advocate Vishal Awtani, seeking an appropriate direction to the State to increase the fine for not wearing a face cover (mask).

Last Friday (27th November), the Court had said that imposition of fine on not wearing masks is not acting as a sufficient deterrent amongst the public and the State Government may consider making violators work at Covid-19 centres.

However, it was just a suggestion and it did not attain finality and it was decided that the same shall be discussed by the Court with the State Government on Tuesday (1st December).

As per the report of PTI, on Tuesday (01st December), Gujarat government told the High Court that it was unable to figure out how those caught not wearing a mask can be made to do community service at COVID centres, as proposed.

"The position of the government is like Prince Hamlet in the Shakespearean play...We could not take any decision because the anxiety of government is not about implementation but post-implementation....to see if each one of them (offenders) have gone for (community) service, to track thereafter," AG Kamal Trivedi said before the Court.

Noting the sudden increase in the number of COVID cases, the Court said that the increase could largely be attributed to the "negligence and recklessness of the public at large, in not maintaining social distancing norms and not diligently and strictly wearing face masks/coverings."

"Such conduct is detrimental to the general health and safety of the people. As a matter of fact, many scientific studies have called the face mask/covering as a "Vaccine" for the virus. In such times, there is a great need to instil a habit amongst the people to wear face masks, in order to protect the health of the people, at large."

The Court emphasized that a violator not wearing a face cover/mask "is not only putting himself to risk but is also putting people near and around him or in close contact with him to risk. Such others could be his acquaintances, relatives, friends or strangers."

"In effect, he is putting the community at risk and therefore, in line with the concept and in the principle of community service, the said violator must extend services to the community which is put at risk."

The Court directed the State to come up with the notification under the relevant statutes providing that in addition to the imposition of fine, "any person found not wearing face cover/mask to render community service taking the following aspects into consideration":

[a] Any person found to be not wearing or using a face mask/covering in a public place and/or violating the COVID protocol of social distancing, shall be mandated to do community service at any COVID Care centre run by the local authorities.

[b] Such mandate of community service to be implemented for all violators without any discrimination favourable or otherwise.

[c] The duty should be non-medical in nature and can include activities such as, cleaning, housekeeping, help in cooking and serving the food, preparation of record, data feeding, etc. The nature of the duties given shall be appropriately decided by the authorities, considering the age, qualifications, gender and health status of the violator.

[d] Such community service should be for at least 4-6 hours a day, for a period ranging from 5-15 days as the authorities deem it fit and necessary.

[e] Such instances should be widely publicized in the media, including social, electronic, digital and print media, so as to have a desirable deterrent effect.

Other orders on wearing of face masks: