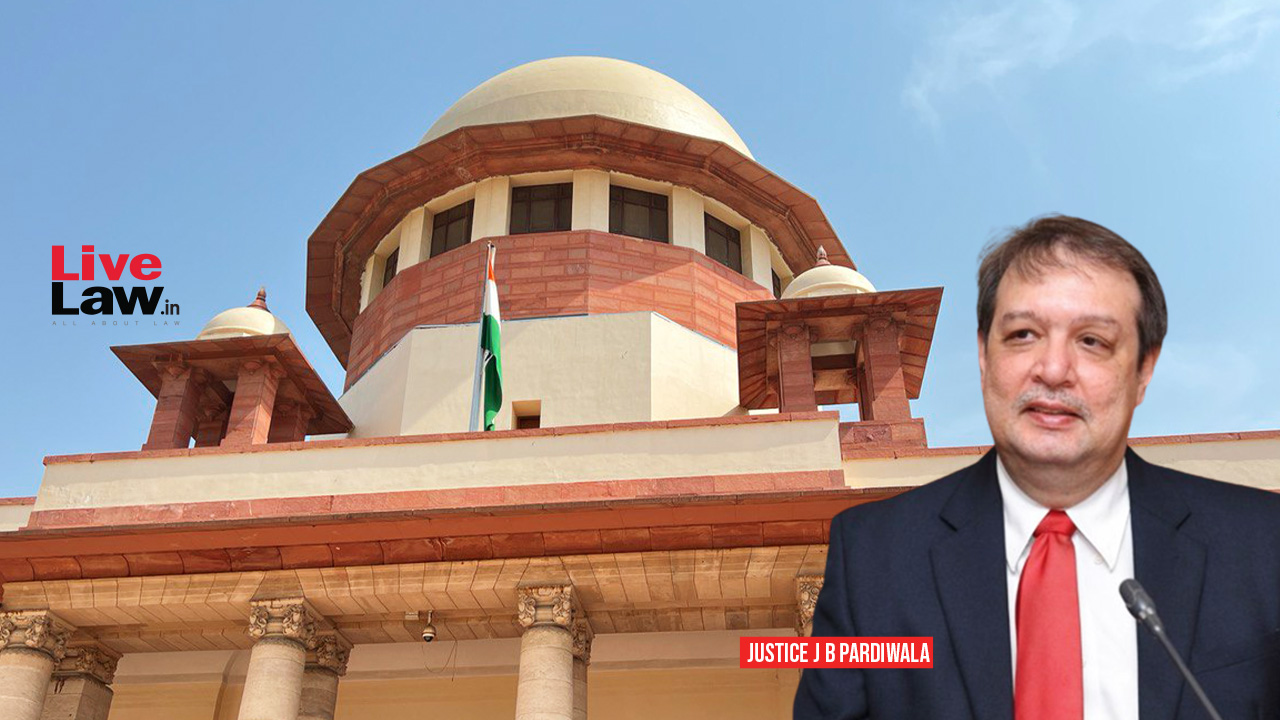 Supreme Court judge Justice JB Pardiwala on Sunday expressed concerns at the personal attacks on judges and said that it can lead to a "dangerous scenario".

"Personal attacks on judges for their judgements lead to a dangerous scenario where the judges have to think about what media thinks instead of what the law really thinks. This harms the rule of law", he said.

"Social and digital media is primarily resorted to expressing personalised opinions more against the judges, rather than a constructive critical appraisal of their judgments. This is what is harming the judicial institution and lowering its dignity", he commented.

"The remedy of judgements does not lie with social media but with higher courts in the hierarchy. In India, which cannot be classified as a completely mature or informed democracy, social digital media is employed frequently to politicize purely legal & constitutional issues"", he added while stressing that Parliament must look into the issue of regulation of social and digital media especially in the context of sub-judice trials in sensitive cases.

Justice Pardiwala was a subject of social media outrage recently in the wake of the oral comments made by a bench in which he was a member against former BJP spokesperson Nupur Sharma.

He was delivering an address on the topic "Vox Populi vs. Rule of Law: Supreme Court of India" in the 2nd Justice HR Khanna Memorial National Symposium, hosted by RMNLU & NLUO with the CAN Foundation.

He commenced his address in remembrance of Late Justice H.R. Khanna by quoting the father of the European Union- "The world is divided into two types of people, those who want to be somebody, those who want to do something." He stated that Justice Khanna fell in the latter category and was remembered over several other judges, because he did things which deserved to be remembered. While speaking on the life and legacy of Late Justice Khanna, Justice Pardiwala also quoted the New York Times, which wrote on Justice Khanna: "The submission of an independent judiciary to absolutist government is virtually the last step in the destruction of a democratic society."

Following this, Justice Pardiwala spoke on the origin of the term "Vox Populi" which he said was initially stated in a disapproving manner. Justice Pardiwala mentioned that "Vox Populi" was first used by the English Archbishop of Canterbury against King Edward II who the archbishop wanted to remove from the throne. Thus, the term was initially used in a negative light. He said that balancing vox populi or the will of people with rule of law was difficult and required extreme judicial craftmanship. He said that "what will people think" or "Log kya kahenge" is what comes to the mind of all judges when adjudging upon an issue which had social ramifications.

Moving on the topic of Rule of Law, Justice Pardiwala stated that Rule of law was the most distinguishing feature of the Indian democracy which began its career through the Indian Constitution. However, he stated that even in countries which were not governed by parliamentary democracy, or had established dictatorships, rule of law prevailed. Thus, rule of law in a democracy like India, as per Justice Pardiwala required careful scrutinization.

Justice Pardiwala distinguished Indian law making from other countries by stating that Public Discussion, Legislative Debates and the Decree of Court or the three 'D's set Indian law making apart from other governments. He provided the example of the British, wherein the sovereignty of parliament was absolute. He then stated that while the Indian legislatures– Federal and State were undoubtedly sovereign, their spheres were defined. Thus, acts which were passed beyond the given sphere were liable to be challenged.

Justice Pardiwala stated that he was a firm believer of the fact that the Rule of Law had no exceptions and that the opinion of the public hardly mattered when it came to judicial verdicts. He stated that the Judicial verdicts could not be reflections of the influence of public opinion on the Court.

At the same time, Justice Pardiwala also provided with the opinion of Prof KT Shah on the importance of inclusion of 'vox populi' in the Constitution of India as the will of the people was supreme. He quoted Prof. K.T. Shah to further elaborate upon this – "Where there is collective wisdom, there is after all real salvation." However, Justice Pardiwala stated that he was of the opinion that one ought to disassociate oneself from the majority and go by the rule of law. While elaborating upon his opinion, he stated that under the Indian constitutional scheme no minority group must suffer deprivation of rights because they do not adhere to majoritarian way of life. Justice Pardiwala cited the Navtej Singh Johar judgement, which decriminalized homosexuality in India, as the "finest example" wherein the Supreme Court upheld the rule of law as opposed to the opinion of the public.

He also mentioned the landmark verdicts of the Supreme Court in issues of Sabrimala, LGBTQ rights and death penalty to highlight the friction between aspiration of society and the necessity of upholding rule of law comes.

Justice Pardiwala cited the Navtej Singh Johar judgement, which decriminalized homosexuality in India, as the "finest example" wherein the Supreme Court upheld the rule of law as opposed to the opinion of the public. He also quoted the Sabrimala judgement to highlight the importance of Rule of law and stated that "let every person remember that the holy book is the Constitution of India."

He then spoke extensively on the role of media when it came to upholding the rule of law. He stated that a trial was supposed to be carried out by the courts and trials by digital media were undue interference for the judiciary which crossed the "Laxman Rekha", especially when only half the truth was pursued. He further criticized media trials by stating that social media had become more about personal opinions against the judges instead of opinions criticizing their judgements. Justice Pardiwala stated that this what harming the judiciary in the country and personal attacks on judges for their judgements were leading to a dangerous scenario where the judges were now thinking about what media thinks instead of what the law really thinks. He also stated that the remedy of judgements did not lie with social media but with higher courts in the judicial hierarchy.

As a solution to this problem, Justice Pardiwala stated that regulation of social and digital media, especially in the context of sensitive trials which were sub-judice, must be looked at by the parliament. He stated that there were several reports by national as well as international organisations handling the perpetual issues of media trials. One of the notable principles established in this context were the Madrid Principles on the Relationship between the Media and Judicial Independence, 1994. The Madrid principles state that it is the right of the digital media to collect and share information with public on the administration of justice however, with appropriate checks and balances.

While stating that judges must not participate in social media discussions, Justice Pardiwala said– "Judges never speak through their tongue, only their judgements." Finally, he concluded his address by stating that judiciary could not exist independent of society but the rule of law was insurmountable.