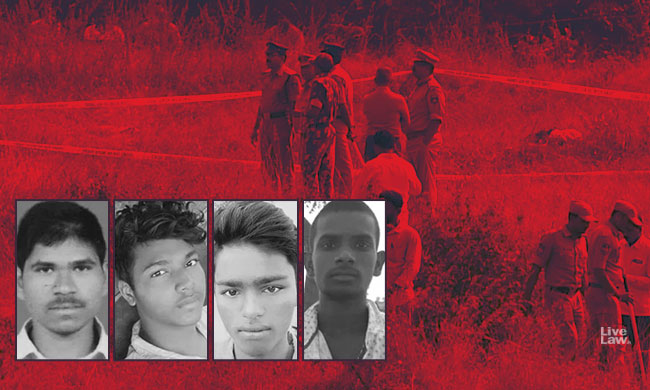 A PIL Writ petition has been filed in Supreme Court by two advocates seeking directions for an investigation, the registration of an FIR and subsequent action against the police personnel who killed the four people accused of the rape and murder of the Veterinarian doctor in Hyderabad in an alleged encounter. The petitioners have marked the Union of India through the Ministry of Home...

A PIL Writ petition has been filed in Supreme Court by two advocates seeking directions for an investigation, the registration of an FIR and subsequent action against the police personnel who killed the four people accused of the rape and murder of the Veterinarian doctor in Hyderabad in an alleged encounter.

The petitioners have marked the Union of India through the Ministry of Home Affairs, Chief Secretary of Telangana, DGP of Telangana Police and V C Sajjanar, the Commissioner of Cyberabad Police as respondents and sought for directions to the latter three, along with state authorities, to produce the records pertaining to the 'fake encounter'. The petitioners further seek orders for the registration of an FIR, and then an investigation against the personnel involved in the encounter, including Sajjanar, by the CBI, SIT, CID or any team of another state police headed by a senior official not below the level of the head of the team which conducted the encounter. While it is not mentioned in the prayer, the petitioners have stated that the FIR ought to be registered for the offence of murder under Section 302 of the Indian Penal Code. Further, it has been prayed that the independent investigation agency (if set up according to the initial prayer) must be directed to act in accordance with the 16 guidelines laid down by the Apex court itself (in PUCL v State of Maharashtra) regarding the manner in which investigation in fake encounter killing cases are to be conducted.

During the night of November 28, the incident of rape and murder took place, cite the petitioners, and when the news broke out, the public was shocked and protests seeking severe punishment were carried out. However, they highlighted, "it is pertinent to note that the concerned police station was refused to take immediate action and to register case when the victim's family went to the police station to lodge a complaint prior to the rape and murder." But then, the police claimed to have arrested the accused in 24 hours. Then they cite media reports regarding the police's version of how the encounter took place on December 6 and the circumstances that necessitated the same. Reference is also made to Sajjanar's statement to the media, post the encounter, explaining how the accused pelted stones, tried snatching the police's rods and pistols and that they were gunned down in retaliation.

The petitioners, GS Mani and Pradeep Kumar Yadav, have placed great reliance on the PUCL case and cited it to urge the court that, in light of Article 21 guaranteeing everyone a right to lead a dignified life, even the State does not have the power to violate it

As per police version, all four accused - namely Mohammed Arif, Chintakunta Chennakeshavulu, Jollu Shiva and Jollu Naveen - were taken to the scene of the crime around 60 Km from Hyderabad at about 3 AM on December 6 for a re-construction of crime scene. Reportedly,  one of them signaled to the others, possibly to escape and they tried to snatch weapons from the police personnel when the police fired on them and they died allegedly in cross firing.

According to the petitioners, the body language of V C Sajjanar IPS during the press conference suggested that he had no regrets over the killing.  The public are feting the police officials with garlands and sweets for the encounter. If such activities are allowed, there will be no meaning for rule of law, the petitioners stated.

"Since there is a chance of tampering evidences and destroying the material documents and evidences by the concerned police officers who are in high level, this Hon'ble Court may be hear this PIL writ petition on an urgent basis and pass an appropriate order accordingly in the interest of justice", urged the petitioners.

The petitioners while clarified that it is indisputable that anyone will support persons accused of involvement in the gang rape and murder cases, have expressed grave concern over the manner in which high level police officers took the law in their own hands. They highlight how 'unfortunate' it is that the case was dealt with without conducting proper investigation or bringing the accused before the court. They further allege that this was done to divert public attention away from the sensational case of rape and possibly to protect the real perpetrators, which will remain unanswered. They also say that such a fake encounter amounts to murder.

"An investigating agency of such cases and officers even in the high level police officers like Commissioner of Police in the police department taking the law into their hand, conducting fake encounter and killing alleged rape accused without conducting a proper investigation, collecting evidences, framing charges and without bringing them before the court for punishment is very unfortunate. Such fake encounter killing was conducted only to divert the public reaction over sensational gang rape and murder cases against innocent young girls and may be to protect the real culprits which is very serious, painful and not only impermissible under the rule of law but such fake encounter killing is amounts to pre-planned murders in the hands of police official with the help of power and public support.", the plea stated.

The Telangana High Court has taken cognizance of the encounter based on a representation received by the office of the Chief Justice. The Court has directed vide recording of the post-mortem proceedings, and has asked the State Government to preserve the dead bodies till Monday.